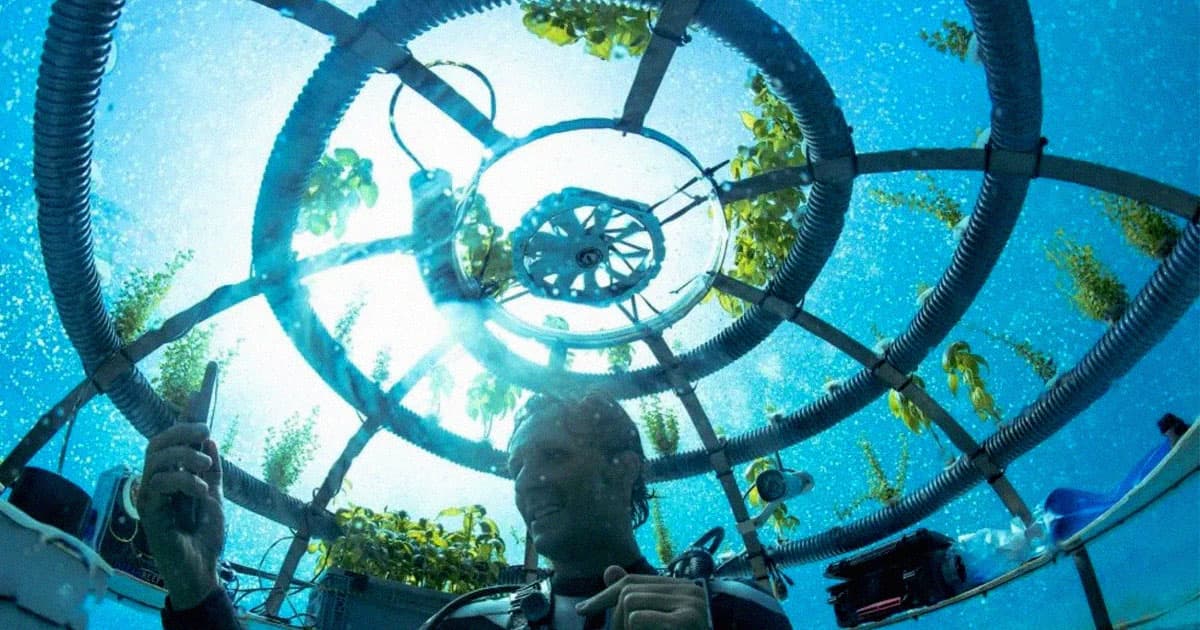 These photos are absolutely breathtaking.

These photos are absolutely breathtaking.

Welcome to "Nemo's Garden," a surreal — and beautiful — underwater garden off of Italy's Northwestern coast.

There, National Geographic reports, terrestrial plants are grown in submerged plastic greenhouses dubbed "biospheres," which can be seen glowing from the surface. And we gotta say: the pictures of these plastic, herb-filled oddities are absolutely stunning.

An Italian project, known as Nemo’s Garden, is testing the viability of underwater greenhouses https://t.co/Y1PQDM4p3Z

Sergio Gamberini, the man behind this almost fantastical project, isn't just out to create something that looks beautiful.

He's hoping that his plastic orbs, which rest between 15 and 36 feet below the ocean's surface and hold about 528 gallons of air, will provide a water-conserving, overall sustainable alternative to on-land agricultural operations, particularly helping dry coastal nations grow more food without having to desalinate more water — a costly and resource-intensive process. The plants require just a small bit of starter water, but from there, they're self-sustaining. Sunlight heats the submerged spheres, which contain humid air that naturally condenses into freshwater on the walls and drips back into the soil.

"Since the underwater farm needs an external source of water only for the start-up of plants growing," reads the company's site, "our system could be useful for those locations far from the bodies of water available."

Nemo's Garden is still in its earlier phases, but results have been promising. One 2020 study showed that the organization's underwater-grown basil actually had more chlorophyll and antioxidants than land-reared basil — a fascinating finding, considering that the water pressure actually forces the Nemo plants to grow a bit differently than they might on the surface.

Excitingly, marine life is reportedly drawn to the glowing orbs as well; according to NatGeo, the structures act like an artificial coral reef for nearby species.

Whether Nemo's Garden will one day be coming to a coastline near you remains to be seen. In the meantime, though, we might agree with NatGeo photographer Luca Locatelli, who says he's excited to see someone take a well-intentioned leap — or perhaps a dive — of faith.

"We need someone who thinks about crazy things — not only ordinary inventions — that are coming out of a real passion," Locatelli told the magazine. "It might be something, it might not, [but] I like the fact that someone is so brave to invest money on such a thing."