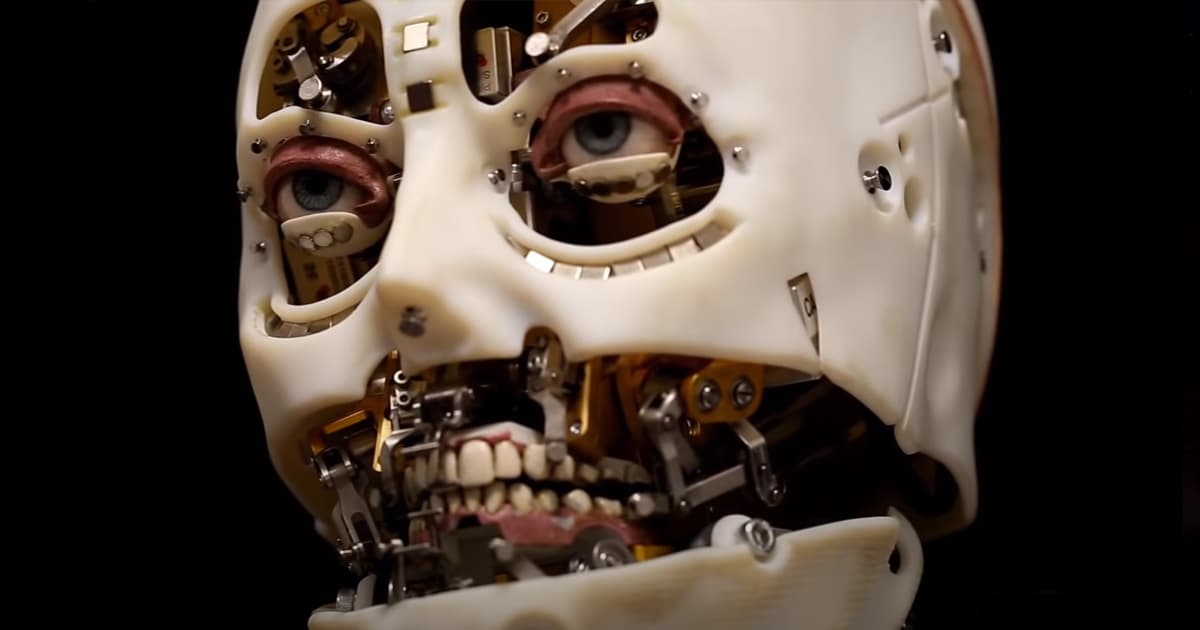 Happy Halloween, everyone. A team of researchers at Disney have built a terrifying animatronic robot — an experiment in replicating the "gaze" of a human in order to appear more lifelike.

And as evidenced in a video, fleshless visage of the robotic monstrosity is terrifying, with realistic eyes — fleshy exposed eyelids and all — staring right into your soul. And let's not even get started on its messed up looking teeth.

"We present a general architecture that seeks not only to create gaze interactions from a technological standpoint, but also through the lens of character animation where the fidelity and believability of motion is paramount," reads the abstract of a paper about the robot titled "Realistic and Interactive Robot Gaze." "That is, we seek to create an interaction which demonstrates the illusion of life."

And arguably the scary-looking robot is capable of doing just that. Its movements are swift and fluid, as if haunted by the soul of a living being.

To bring their Frankenstein illusion to life, the team layered subtle motor movements for breathing, blinking, and "saccades," which are rapid movements of both eyes, on top of each other.

The robot can even react to external stimuli, like keeping eye contact with a moving subject — in this case, waving and head-bobbing Disney researchers, who seem to have fallen under its necromantic spell.

READ MORE: Disney Made a Skinless Robot That Can Realistically Stare Directly Into Your Soul [Gizmodo]

FROM THE DEPT. OF THINGS TO BUY
The Best Streaming Services in 2023
10. 29. 22
Read More
Do The Worm
Scientists Name "Funky Worm" Amphibian After a Weird 70s Funk Song
Yesterday
Read More
High Tide
We’re in Awe of Amsterdam’s Huge Underwater Bike Parking Garage
Yesterday
Read More
+Social+Newsletter
TopicsAbout UsContact Us
Copyright ©, Camden Media Inc All Rights Reserved. See our User Agreement, Privacy Policy and Data Use Policy. The material on this site may not be reproduced, distributed, transmitted, cached or otherwise used, except with prior written permission of Futurism. Articles may contain affiliate links which enable us to share in the revenue of any purchases made.
Fonts by Typekit and Monotype.