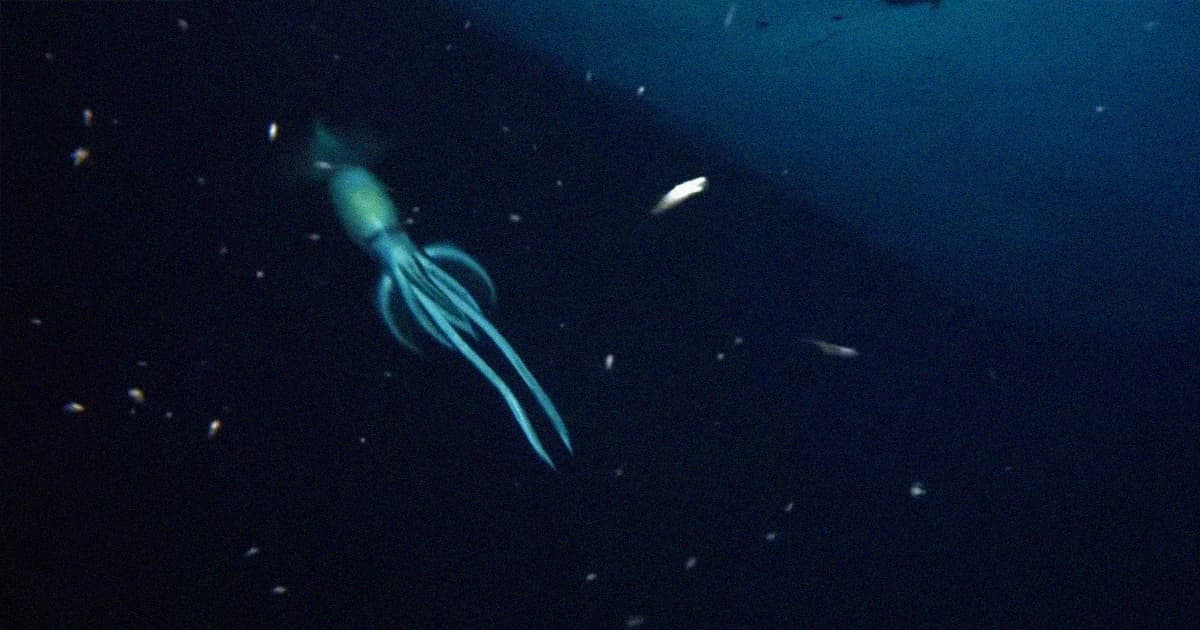 It was larger than a human, but it wasn't a giant squid.

It was larger than a human, but it wasn't a giant squid.

In October 2020, a remotely-controlled deep sea vessel got surprised by a sizeable sea creature while exploring a shipwreck in the Red Sea almost 2,800 feet below the surface.

There are still plenty of unanswered questions, but researchers are fairly certain that the tentacled visitor wasn't a giant squid, thanks to its body proportions. And that's despite the fact that it was larger than an adult human — an exciting discovery that goes to show how much there still is to learn about planet's deep oceans.

At first, the vessel detected a "this little, tiny anomaly on the map," recalls Mattie Rodrigue, science program lead at OceanX, in a recently posted video. The anomaly turned out to be the "Pella," a ship that sank in 2011 while on the way to an Egyptian port, standing out in the team's map of the ocean floor.

OceanX is an ocean exploration initiative. The OceanXplorer is an advanced exploration vessel that can send Remotely Operated Vehicle (ROV) down to depths of up to almost 20,000 feet.

"All of a sudden, as we're looking at the bow of the shipwreck, this massive creature comes into view, takes a look at the [remotely operated underwater vehicle] and curls its entire body around the bow of the wreck," Rodrigue said in the video.

The team was "frozen in absolute shock," she added.

After consulting with squid expert Mike Vecchione, the team believes they may have identified it as a "giant form" of the purpleback flying squid. It's a large squid that can be found in the Indo-Pacific ocean and particularly in the Red Sea, where there is a "well known population," according the researcher.

But given its proportions, it's not a "giant squid" (Architeuthis dux), Vecchione reasoned.

It's a mysterious sighting, given the proximity to the shipwreck.

"There's no actual record of members of that family [of squid] aggregating on a structure like that, so if that's actually happening, that would be really interesting," Vecchione said in the video.

More on ocean exploration: Check Out This Amazing Design for an Underwater “Space Station”

So Dark
Scientists Discover "Vantablack" Deep-Sea Creatures
7. 17. 20
Read More
O Canada!—The Great White North Joins Mission to Map the Great Unknown
7. 7. 16
Read More
Choked Out
Entire Island Strangled by Choking Vines
Yesterday
Read More
+Social+Newsletter
TopicsAbout UsContact Us
Copyright ©, Camden Media Inc All Rights Reserved. See our User Agreement, Privacy Policy and Data Use Policy. The material on this site may not be reproduced, distributed, transmitted, cached or otherwise used, except with prior written permission of Futurism. Articles may contain affiliate links which enable us to share in the revenue of any purchases made.
Fonts by Typekit and Monotype.