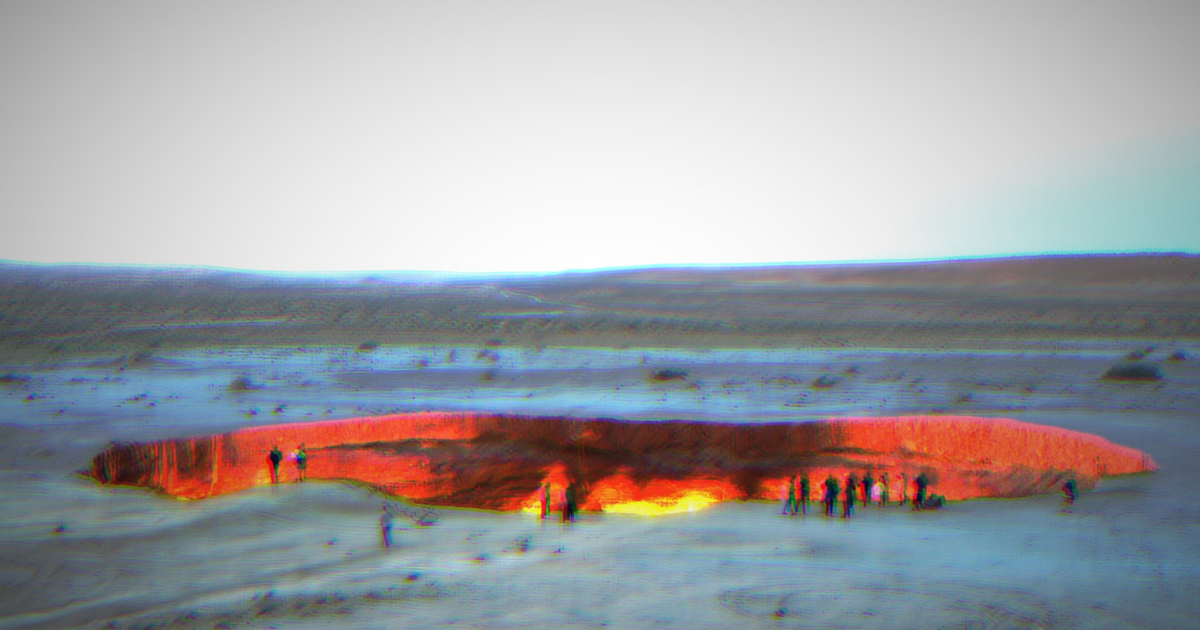 Good luck with that!

Good luck with that!

Fire in the Hole

After fifty years of continuous burning, Turkmenistan officials are finally trying to close up a 230-feet wide fiery sinkhole in the Karakum Desert known hyperbolically — but only somewhat — as the "Gates of Hell."

No one is entirely sure how the hellish pit, located about 150 miles north of the Central Asian country's capital, started burning, according to Metro. But one theory is the Soviet Union set it on fire in the 70s in a bid for resource extraction.

The rumor is that Soviet operatives went looking for natural gas deposits and found the sinkhole, which would have been filled with dangerous gas. As the theory goes, they set it on fire, thinking it would burn out pretty quickly — but couldn't have been more wrong.

In the past, Turkmenistan's President Gurbanguly Berdimuhamedov had declared the pit a tourist destination after unsuccessfully trying to stop the burning in 2010, with Metro reporting that thousands of people visit it every year. Apparently, Berdimuhamedov even did donuts in a rally car outside the crater to dispel a rumor that he'd died. Here's the video:

If Turkmenistan can actually figure out how to put out the half-century old fire, the US might actually be able to learn a thing or two. Turns out we have some long-term fires here, including the Centralia fire in Pennsylvania. According to History.com, Centralia was a booming coal town about a century ago. But it was mostly abandoned after the town accidentally set an underground coal seam on fire in 1962, and it's been burning ever since — a ghastly phenomenon that reportedly inspired the Silent Hill horror franchise.

According to the US Department of Environmental Protection, the Centralia fire could continue burning for another century and is one of about 38 such coal fires in the state. Although coal and natural gas deposits are different, perhaps the US could benefit from whatever wild plan Berdimuhamedov comes up with to stop his own raging flames.

Bitcoin Ban
Another Entire Country Just Banned Crypto Mining
1. 9. 22
Read More
Coal Crypto
Bitcoin Mining Company Buys Entire Coal Power Plant
9. 27. 21
Read More
Climate Connection
Bill Gates Attempts to Explain Why He Bought More Farmland Than Anyone Else in America
3. 22. 21
Read More
+Social+Newsletter
TopicsAbout UsContact Us
Copyright ©, Camden Media Inc All Rights Reserved. See our User Agreement, Privacy Policy and Data Use Policy. The material on this site may not be reproduced, distributed, transmitted, cached or otherwise used, except with prior written permission of Futurism. Articles may contain affiliate links which enable us to share in the revenue of any purchases made.
Fonts by Typekit and Monotype.