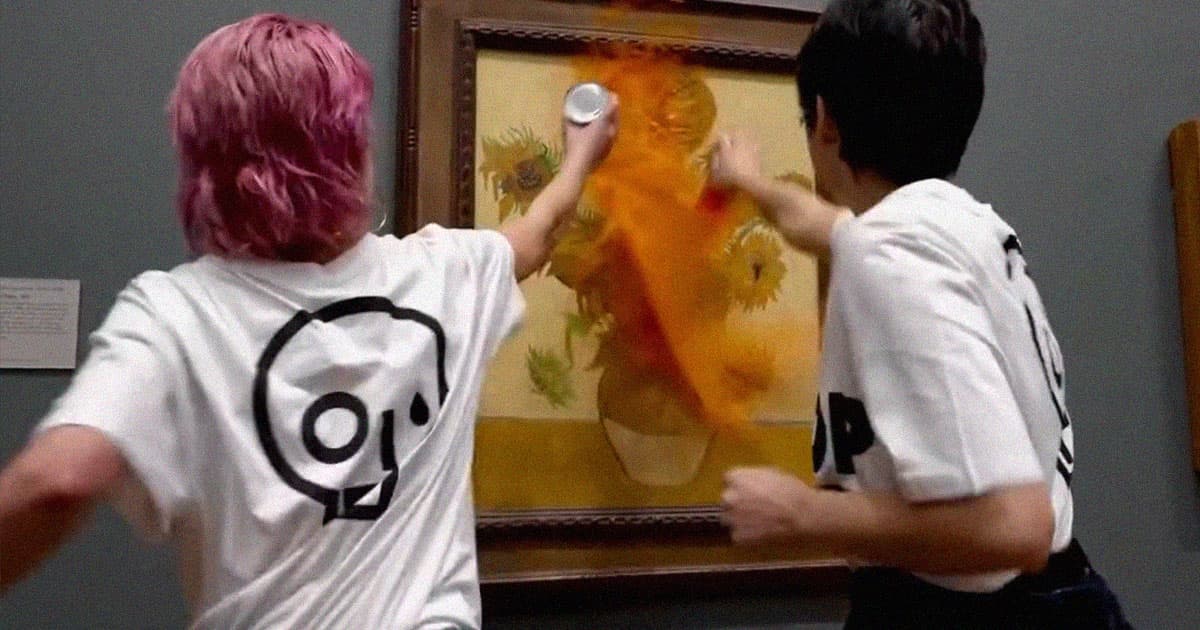 "What is worth more, art or life?"

"What is worth more, art or life?"

A shocking new video shows two climate activists throwing the contents of a can of tomato soup at Vincent van Gogh's famous "Sunflowers" painting at London's National Gallery in the UK, before gluing their hands to the wall.

"What is worth more, art or life?" one of them said.

The painting itself is kept behind a pane of glass and likely didn't sustain any damage, fortunately.

While the protesters were associated with "Just Stop Oil," a UK-based climate action campaign group, we can't help but feel like the message got a little lost.

🎨 Human creativity and brilliance is on show in this gallery, yet our heritage is being destroyed by our Government’s failure to act on the climate and cost of living crisis.#VanGogh #FreeLouis #FreeJosh #CivilResistance pic.twitter.com/gXXGLsi0ej

The pair were quickly taken into custody by police — but their hands had to be unglued from the wall first. The protesters are now facing charges of criminal damage and aggravated trespass, according to NBC News.

In the face of all that, the message the protesters were attempting to send takes a little unpacking.

"Are you more concerned about the protection of a painting or the protection of our planet and people?" one of the protesters said in the video. "The cost of living crisis is part of the cost of oil crisis. Fuel is unaffordable to millions of cold, hungry families. They can't even afford to heat a tin of soup."

In other words, the can of soup represents the families' struggles to afford fuel — or at least, that's one way to interpret their message.

On its Twitter account, Just Stop Oil defended the stunt. "Human creativity and brilliance is on show in this gallery," the group wrote, "yet our heritage is being destroyed by our Government’s failure to act on the climate and cost of living crisis."

The news comes after a different climate activist associated with the group held an entire interview earlier this month while being carried away by the police during a protest.

"I'm doing this for my son," she said at the time. "The government's inaction on climate change is a death sentence for us all."

More on the group: Climate Activist Conducts Interview While Being Carried Away by Police