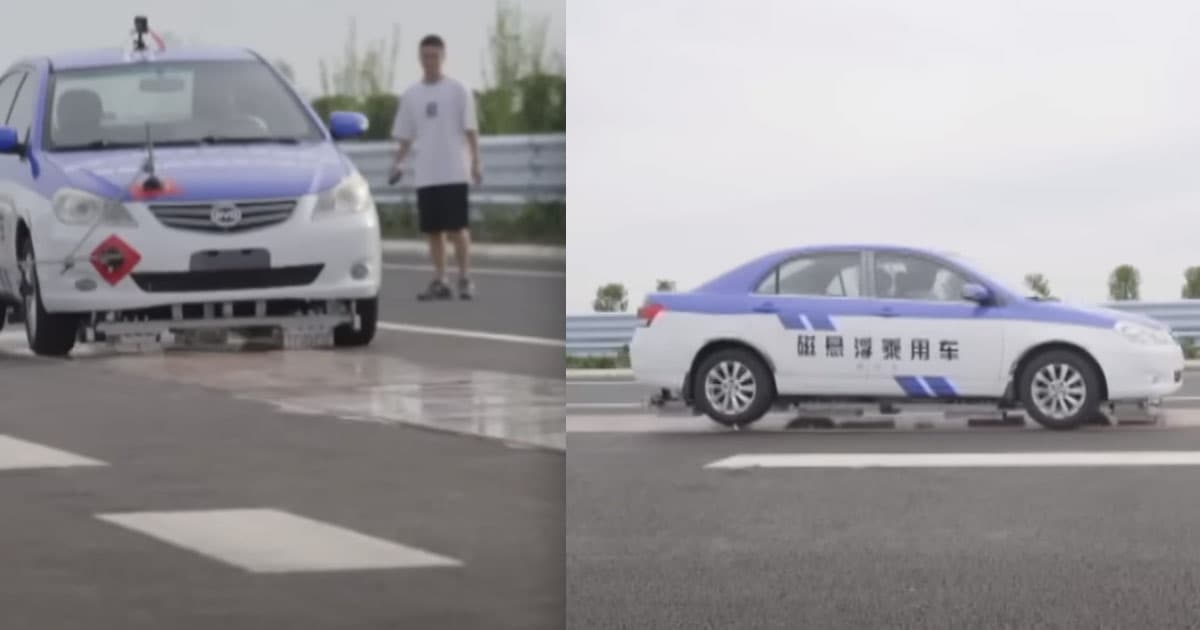 They were able to go way faster than 88 mph.

They were able to go way faster than 88 mph.

Chinese researchers at Southwest Jiaotong University have tested modified cars capable of magnetically levitating almost an inch and a half off of the ground over a stretch of specially modified highway, state-run media outlet Xinhua reports.

A video of the test shows a modified passenger vehicle gliding along the surface, while its four tires spin helplessly in the air, rendered useless by what appear to be magnetic repulsors attached to the bottom of the vehicle.

Is this really the "Back to the Future"-esque future of the car? The researchers behind the test are hoping maglev cars could reduce energy consumption.

But judging by the clunky equipment and rocky ride seen in the video, immense engineering challenges — and likely safety ones, as well — remain before the tech could possibly become practical.

A #maglev vehicle technology test saw a 2.8-tonne car float 35 millimeters above the road and run on a highway in #Jiangsu, east China. A permanent magnet array was installed for levitation. pic.twitter.com/7vWc8TvJpn

Details surrounding the test are still sparse. According to Xinhua, eight modified vehicles were tested on a roughly five mile stretch of highway.

Both the roadway, located in the eastern province of Jiangsu, and the vehicles themselves had to be heavily modified to pull off the stunt. Engineers added an array of permanent magnets to the floor of the vehicles, while running a conductor rail along the length of the highway.

The speed was also striking, with cars reached a reported velocity of 143 mph. While that's pretty fast, it's still a far cry from the country's maglev bullet trains, the fastest of which can reach speeds of up to 373 mph.

Why Car Insurance Is So Complex, and How to Simplify It
11. 2. 20
Read More
Riot Gearheads
New Toyota Patent Would Let Cars Spray Thieves With Tear Gas
3. 11. 19
Read More
Electric Cars May Be Cheaper Than Gas Guzzlers in 7 Years — If People Actually Buy Them
3. 23. 18
Read More
+Social+Newsletter
TopicsAbout UsContact Us
Copyright ©, Camden Media Inc All Rights Reserved. See our User Agreement, Privacy Policy and Data Use Policy. The material on this site may not be reproduced, distributed, transmitted, cached or otherwise used, except with prior written permission of Futurism. Articles may contain affiliate links which enable us to share in the revenue of any purchases made.
Fonts by Typekit and Monotype.