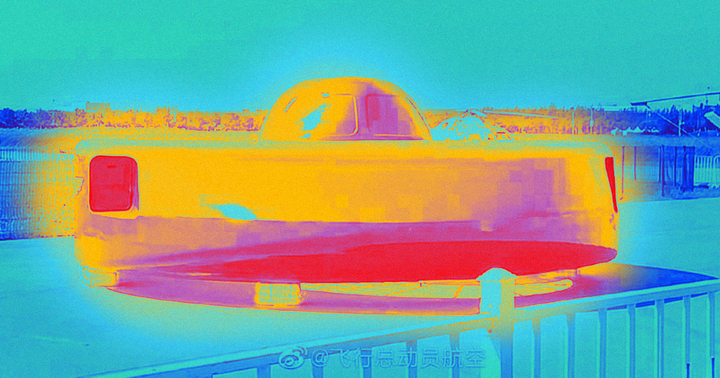 Images from an aviation expo in China show a new Chinese military aircraft that looks strikingly like a flying saucer out of a vintage UFO movie.

Last week, photos started circulating online of a craft with an alien-looking outer shell and a central cockpit. By Friday, the state-run Chinese newspaper Global Times had seemingly confirmed that the vehicle is an experimental attack helicopter dubbed the Great White Shark, which could fly as soon as 2020.

A detailed analysis of the project by The Drive — including a translation of a placard that accompanied the craft at the expo — argues that the vehicle probably generates lift using a 16-foot rotor that's armored by its outer shell, while two jet engines provide forward thrust.

The Drive also points out that the futuristic craft isn't the first to feature a circular, saucer-like design — although military contractors have struggled to make the concept practical over the battlefield.

One thing's for sure: the concept shows that China, like the United States, is trying to figure out what form the attack helicopters of the future will take.

14 Dead
Russian Sub That Caught Fire Possibly Sent to Cut Internet Cables
7. 3. 19
Read More
Bumper Drones
Cargo Drones Have One Problem: Not Crashing Into Things
3. 28. 19
Read More
Tiltrotor Down
A "Tiltrotor" Helicopter May Replace the Army's Black Hawk
2. 21. 19
Read More
+Social+Newsletter
TopicsAbout UsContact Us
Copyright ©, Camden Media Inc All Rights Reserved. See our User Agreement, Privacy Policy and Data Use Policy. The material on this site may not be reproduced, distributed, transmitted, cached or otherwise used, except with prior written permission of Futurism. Fonts by Typekit and Monotype.