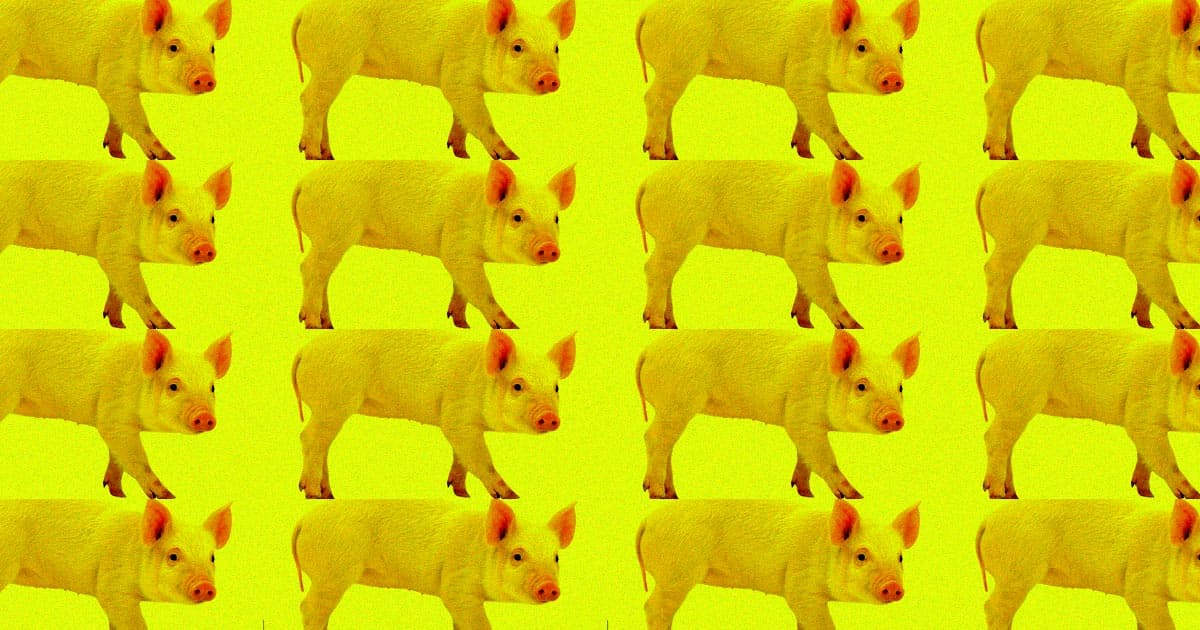 This could change world food systems.

This could change world food systems.

Old McDonald had a... pig-cloning robot?

According to the South China Morning Post, a fully-automated cloning process now exists, and it apparently works like a charm. In fact, in a slightly brutal blow to human scientists, the AI-powered system is alleged to have drastically reduced the amount of error seen during manual cloning attempts.

Created by researchers at the University of Nankai's College of Artificial Intelligence, this tech — which the scientists tell the newspaper facilitated the birth of seven piglets via surrogate sow, without any human involvement — could potentially lead to commercialized cloning becoming a norm.

Cloning, which is most commonly done through what's called a somatic cell nuclear transfer, is delicate and time consuming. Cells are easily injured along the way, and both human blunder and the overall tediousness of the practice have been major roadblocks to commercialization.

One of the researchers, Pan Dengke, lamented to the SCMP that his many years of long hours hunched over microscopic cells has resulted in back problems, and automation could relieve some of the aching.

"Our AI-powered system can calculate the strain within a cell and direct the robot to use minimal force to complete the cloning process, which reduces the cell damage caused by human hands," his colleague Liu Yaowei told the paper.

Food security across the board is high on Chinese president Xi Jinping's agenda, and pork is very important in China. It's the country's most popular meat, and the hog industry is still recovering from a 2018-19 outbreak of African swine virus that heavily impacted its breeding stock. According to Reuters, the loss of so many healthy sows resulted in a greater need for breeding imports, and the industry has since been looking to regain self-sufficiency.

Liu told the SCMP that he hopes the efficient, automated cloning practice will result in more accessible, high-quality pig stock for the masses while also aiding the national self-sufficiency efforts.

Providing accessible food to a wider number of people would certainly be a major plus. But as commercial cloning isn't yet mainstream, the full breadth of its impact remains to be seen.

More animal cloning: Instagram Influencers Are Cloning Their Pets to Keep Churning Out Content After They Die

Dealbreaker
Shocker: Elon Musk's Twitter Deal May Already Be Falling Apart
Apr 28
Read More
Walls Up
China Is Building a Huge New Wall to Allegedly Keep COVID Out
Feb 3
Read More
Pet Semetary
Instagram Influencers Are Cloning Their Pets to Keep Churning Out Content After They Die
Jan 18
Read More
+Social+Newsletter
TopicsAbout UsContact Us
Copyright ©, Camden Media Inc All Rights Reserved. See our User Agreement, Privacy Policy and Data Use Policy. The material on this site may not be reproduced, distributed, transmitted, cached or otherwise used, except with prior written permission of Futurism. Fonts by Typekit and Monotype.