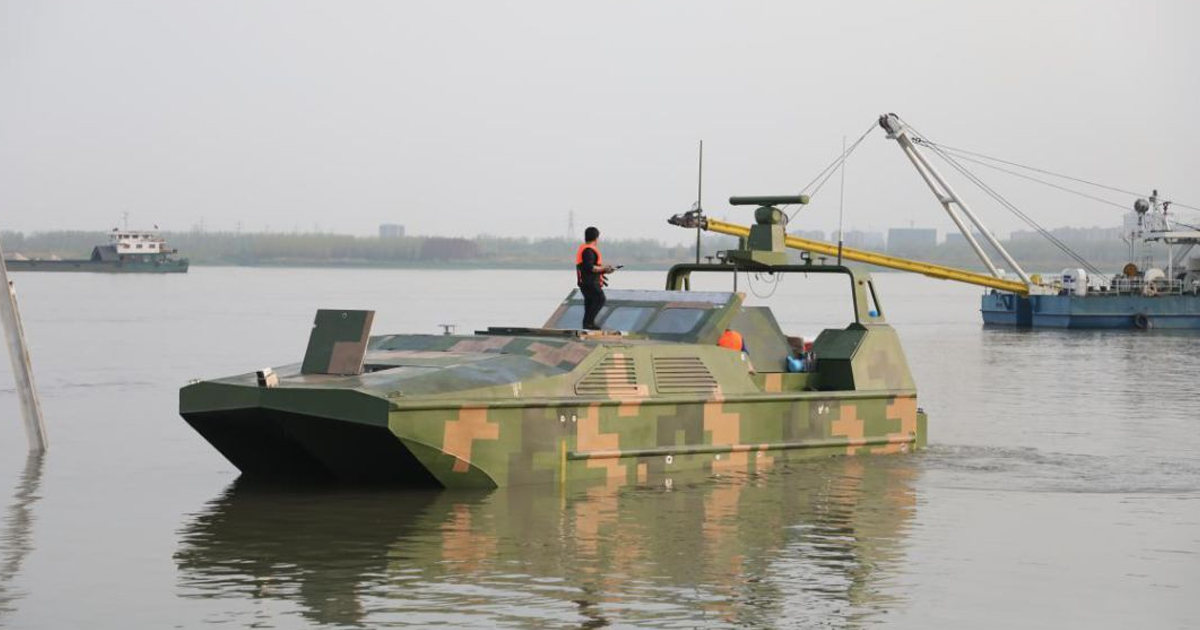 This weird autonomous vehicle is designed for combat missions on land and sea.

This weird autonomous vehicle is designed for combat missions on land and sea.

The 39-foot-long Marine Lizard is designed to assist land assault operations and can form a web with other drone ships and airborne drones in order to act in tandem with them. It can reach a maximum of 50 knots (roughly 57 mph) in the water thanks to a diesel hydrojet engine — and on land it can reach only 12 mph (20 km/h) thanks to four track units mounted to its underbelly.

The Marine Lizard was built by the state-owned China Shipbuilding Industry Company (CSIC) to be truly autonomous: it can find its own way, maneuver around obstacles, or be remotely controlled via satellites with an impressive operating range of 7,450 miles (1,2000 km). When not in use, the vehicle can go into sleep mode for up to eight months while it's not in operation, according to the Global Times.

The unusual amphibian drone is touted as a great way to assist recon missions from both aerial drones and other ships — and could do so very efficiently and with a low risk of casualties, according to the company.

FROM THE DEPT. OF THINGS TO BUY
The Best Science Gifts of 2023
10. 19. 22
Read More
Quantum Supremacy
US Sanctions Chinese Quantum Computing Firms for... Reasons
11. 29. 21
Read More
Quantum Solutions
Chinese Scientists Say They Now Have the World's Most Powerful Quantum Computer
7. 6. 21
Read More
+Social+Newsletter
TopicsAbout UsContact Us
Copyright ©, Camden Media Inc All Rights Reserved. See our User Agreement, Privacy Policy and Data Use Policy. The material on this site may not be reproduced, distributed, transmitted, cached or otherwise used, except with prior written permission of Futurism. Articles may contain affiliate links which enable us to share in the revenue of any purchases made.
Fonts by Typekit and Monotype.