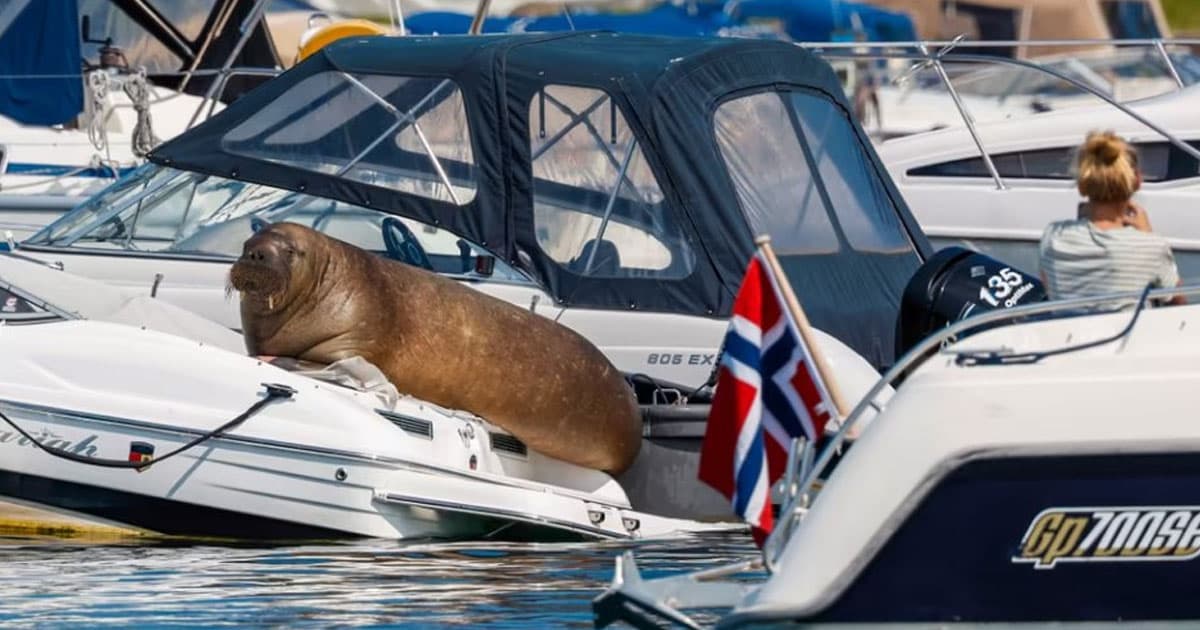 Chaotic Walrus Keeps Climbing on Small Boats and Sinking Them

No one does it quite like Freya, Sinker of Ships and solo travel icon.

This colossal walrus, easily distinguished by an adorable pink spot on her nose, has been on a grand European tour, slumbering and sunbathing on a number of seaborne vessels as she's traveled. She's been spotted off the coasts of Germany, Denmark, and Scotland, as well as the Netherlands, where — we kid you not — she took to snoozing on the roof of a "Walrus-class" Dutch submarine.

But now, upon arriving at harbors in Norway, this massive mammal has chosen chaos: Nordic outlet NH Nieuws reports that in her endless pursuit of sunny naps, the 1,500-pound Freya has been sinking comparatively tiny Nordic boats left and right.

As you can imagine, some boat owners who dock at Freya's new Nordic digs are pretty ticked off.

"I don't want her on the dock or on my boat," one angry marina goer told German broadcaster Deutsche Well.

Thankfully, local authorities and marine scientists have hatched a plan. As NBC reports, Freya will be gifted a floating dock worthy of her magnificent heft. Once she's taken to it, officials say they'll gently carry her to a new home along the coast.

Freya's developed quite the celebrity status, as walruses are exceedingly uncommon in these regions. Normally found in the Arctic circle, she's about 400 miles from home, and it's unclear why she's ended up down South.

We know boats aren't cheap, and we sympathize with folks whose crafts have been damaged or destroyed by the famous walrus' blubbery mass. Hopefully, Freya likes the custom-made floating dock, and the plot to diffuse the situation goes according to plan.

Still, we have to admit. As far as vandalism goes... this is pretty awesome.