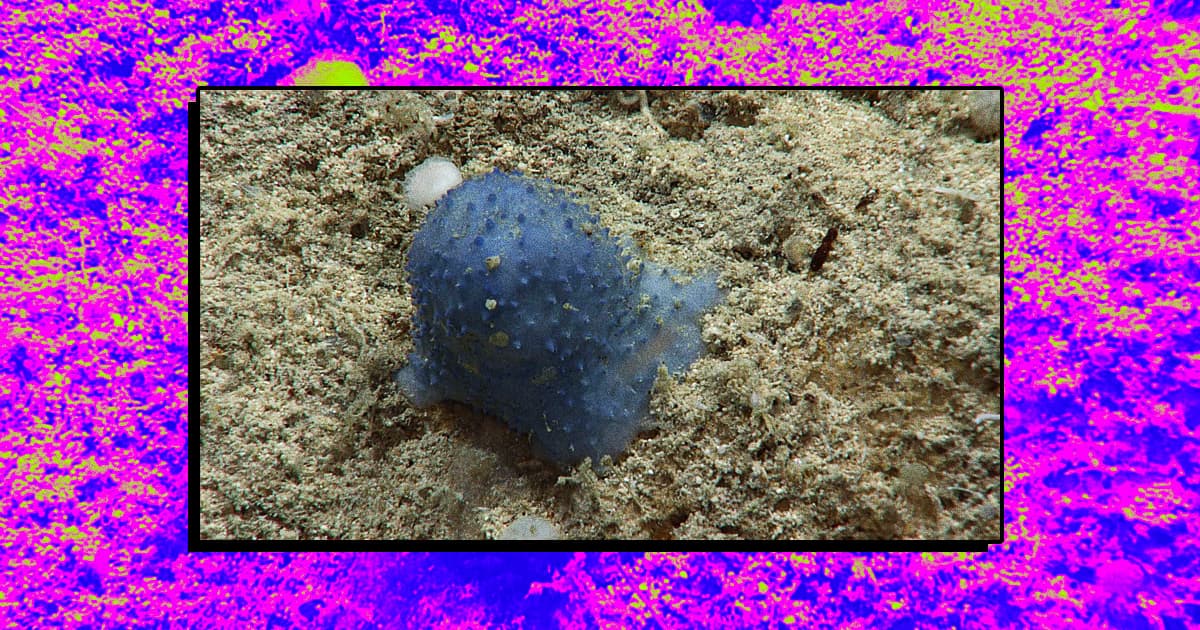 Scientists exploring the bottom of the Caribbean encountered several "blue goo" organisms resting motionlessly on the ocean floor, and they’re not quite sure what they are. Outwardly appearing like bumpy, globular blobs, these yet unidentified things look like if an unassuming massage ball turned out to be a fleshy wart.

Since May this year, scientists aboard NOAA’s flagship exploratory vessel Okeanos Explorer have been probing the largely unexplored deepwater depths of the North Atlantic, as part of an ongoing expedition called "Voyage to the Ridge 2022."

Spotted by a camera aboard the scientists’ remotely operated vehicle (ROV), a video from the official livestream of the expedition captures both the blue goo critter and the scientists’ puzzled reactions.

"Well, I can tell you it’s not a rock," one scientist jokingly conceded.

"Blue biomat?" chimed in another.

"I’ve been calling it blue goo."

Before those suggestions rolled in, one of the crew perfectly summed up everyone’s enthusiasm at the discovery: "We’re still not sure. And we all really like a good mystery."

According to the scientists, the blue goo blob might be some kind of sponge, soft coral, or even tunicate. But really, there’s no way for them to know until a sample is collected and examined, or until another expert is able to identify them from the imagery alone.

"I will definitely reach out to one of my sponge colleagues here in the Caribbean," said one of the scientists in the video.

We're all for more videos like these. Hearing the scientists’ puzzled responses and enthusiastic curiosity is a delight to the ears, about as essential to the entertainment as the discovery of the organisms themselves.

And, as one crew member notes in the same clip, it’s all part of the fun.

"I think that’s actually one of the things that’s most exciting about Okeanos explorer expeditions," they said. "There’s always at least one thing that stumps you."

We'll be keeping our eyes peeled for any updates on what this "bumpy blue thing" might be.

More on the ocean: Scientists Puzzled by Strange Row of Holes on Ocean Floor