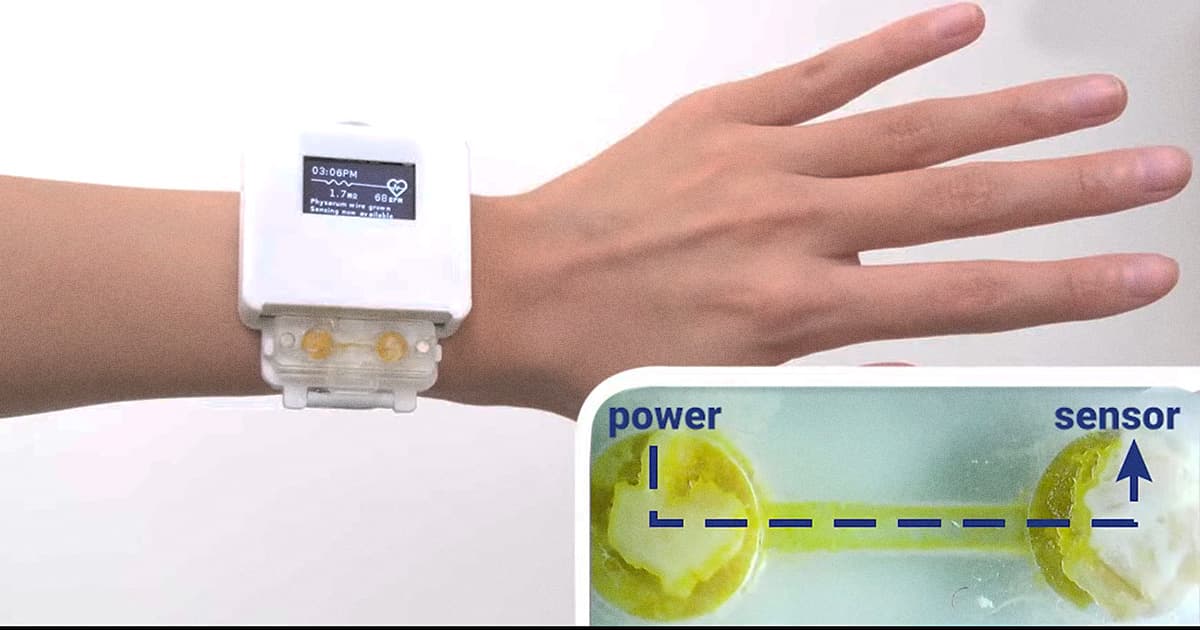 "There were very human responses. Some people were sad, some people really felt like the connection was broken."

"There were very human responses. Some people were sad, some people really felt like the connection was broken."

Scientists at the University of Chicago have designed a truly curious — and partially alive — smartwatch. It incorporates a heart rate monitor that's (kind of) powered by electrically conductive slime mold, resulting in one of the strangest biomechanical wearables we've ever heard of.

Taking care of the watch is key, according to a study presented at the 2022 ACM Symposium on Userface Interface Software and Technology, because the Physarum polycephalum slime mold colloquially known as the "blob" needs to reach from one end of its enclosure to the other in order to complete an electrical circuit that powers the heart rate monitor. That means regularly feeding it water and oats to sustain its growth — which is where things really get interesting.

"People were forced to think about their relationship to devices in a lot of really interesting ways," said lead author Jasmine Lu, a researcher at UChicago's Human Computer Integration Lab, in a press release.

Makes sense, since most of us tend to take our devices for granted and don't exactly treat them like pets (unless, of course, they're Tamagotchis.) It becomes a whole different ball game when all of a sudden there's a substantial, living thing that's not only contained in the watch, but integral to its function.

Naturally, the gadget produced some amusing responses from the five participants who wore it for two weeks each and recorded their feelings in journals and interviews.

The first week was mostly dedicated to growing the slime until it finally was able to bring power to the heart rate monitor.

By the second week, in a cruel twist, the researchers told the participants to stop feeding the slime at all.

"People were shocked; almost all of them were like, 'Really? I have to do that?'" recalled coauthor Pedro Lopes, an assistant professor of computer sciences at UChicago. "There were very human responses. Some people were sad, some people really felt like the connection was broken."

All this raises intriguing questions about our relationship with technology, namely how we maintain such devices that are becoming more and more integrated into our daily lives.

Lu argues that, from the way consumer devices are designed now, "those aspects of care are less focused on or are made inaccessible; they are made so that you trash them, instead of engaging with them more."

More on wearables: Wearable for Opioid Users Injects Narcan If You Overdose

Fashion Sensor
We Shouldn't Need a Smart Dress to Show How Often People are Harassed in Public
11. 30. 18
Read More
Fashion and Technology Are Merging. And It's Astounding.
6. 3. 17
Read More
Your Contact Lenses Can Now "Talk" To Your Smartphone Over Wifi
8. 19. 16
Read More
+Social+Newsletter
TopicsAbout UsContact Us
Copyright ©, Camden Media Inc All Rights Reserved. See our User Agreement, Privacy Policy and Data Use Policy. The material on this site may not be reproduced, distributed, transmitted, cached or otherwise used, except with prior written permission of Futurism. Articles may contain affiliate links which enable us to share in the revenue of any purchases made.
Fonts by Typekit and Monotype.