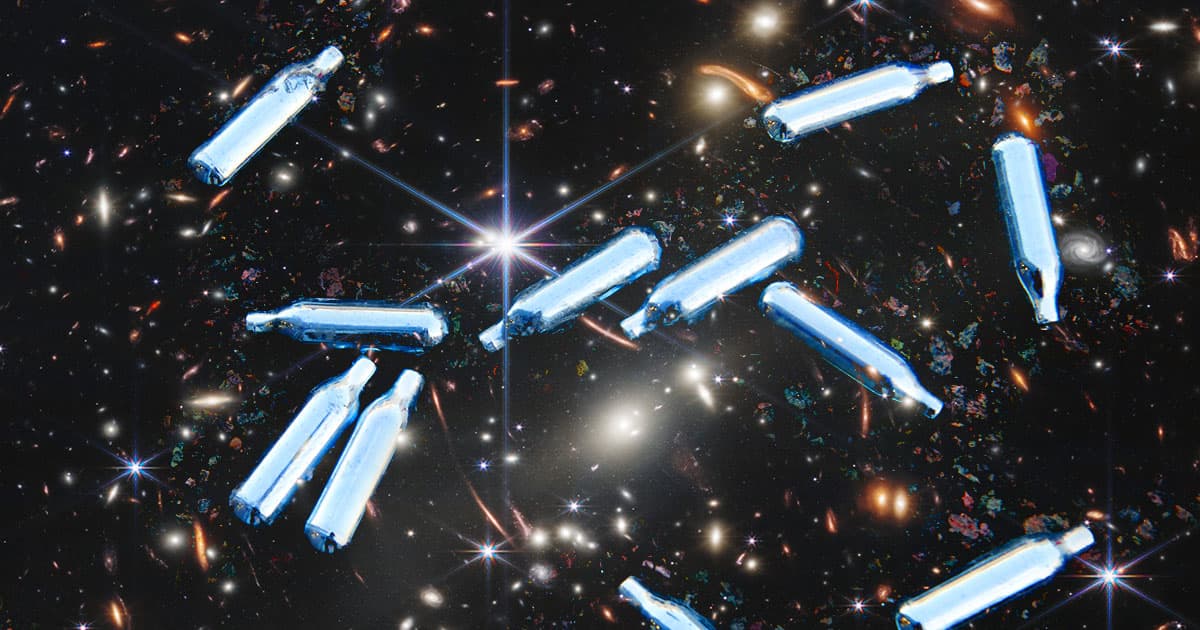 If the concept of space itself isn't trippy enough for you, we have good news — scientists believe that there could well be nitrous oxide, better known as whippets or laughing gas, somewhere out there.

As scientists at the University of California Riverside suggest in a new paper published in the Astrophysics Journal, the concept that space could be full of the same stuff that college students huff for a quick high isn't just fun to consider, but could also be a new indicator for whether or not a planet is habitable.

"Fewer researchers have seriously considered nitrous oxide," UCR astrobiologist Eddie Schwieterman said in a press release, "but we think that may be a mistake."

Schwieterman and his team at UC Riverside's Department of Earth and Planetary Sciences calculated how regularly living organisms produce nitrous oxide, and then entered that data into a planetary model. They then determined that habitable exoplanets with nitrous oxide-rich atmospheres could be detected by tech like the James Webb Space Telescope.

While there are some non-biological situations that produce nitrous oxide, such as the small amount released by lightning strikes, the UCR team accounted for that possibility in its modeling, and noted that lightning also releases nitrogen dioxide, which could also be detected in small levels and used to rule a planet out.

Others who've considered nitrous oxide as a biosignature have, as the press release noted, pointed out that the compound doesn't exist in high quantities in Earth's atmosphere in spite of the billions upon billions of life forms living here. But Schweiterman has an answer for that too.

"This conclusion doesn't account for periods in Earth's history where ocean conditions would have allowed for much greater biological release of [nitrous oxide]," the astrobiologist said. "Conditions in those periods might mirror where an exoplanet is today."

With the JWST offering the greatest space data-collecting capabilities to date, the UCR team hopes their fellow scientists will begin taking the nitrous oxide-as-biosignature hypothesis seriously — and maybe, like so many drug enthusiasts before them, broaden their horizons.

More life off Earth: Swiss Government Scientist Says We May Be on the Brink of Discovering Alien Life

Accuracy Wall
Harvard and MIT Scientists Warn That James Webb Data May Not Be What It Seems
Sep 19
Read More
History Repeating
Astrobiologist: Humans Are Going to Ruin Outer Space
10. 26. 19
Read More
Moon Cotton
China's Lander Just Sprouted First-Ever Plants on the Moon
1. 15. 19
Read More
+Social+Newsletter
TopicsAbout UsContact Us
Copyright ©, Camden Media Inc All Rights Reserved. See our User Agreement, Privacy Policy and Data Use Policy. The material on this site may not be reproduced, distributed, transmitted, cached or otherwise used, except with prior written permission of Futurism. Articles may contain affiliate links which enable us to share in the revenue of any purchases made.
Fonts by Typekit and Monotype.