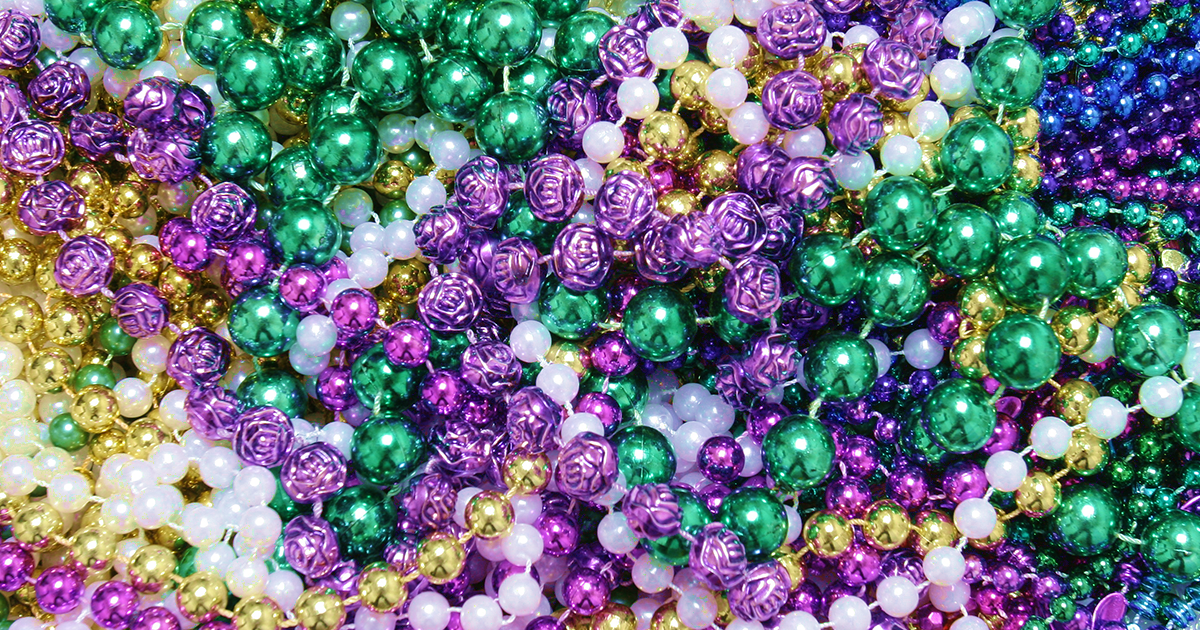 The naked truth about plastic beads.

The naked truth about plastic beads.

Mardi Gras adds about $5.1 billion to the economy of the state of Louisiana — but also produces massive amounts of trash, including almost 1,300 tons in the city of New Orleans alone, with tens of thousands of pounds consisting of plastic Mardi Gras beads.

Now, researchers at Louisiana State University (LSU) have developed biodegradable Mardi Gras beads, produced from algae, that they say could help reduce festival waste at Mardi Gras and festivals around the world.

From that starting point, Kato developed a process by which a microscopic species of algae could be grown, harvested, and ground into a fine powered capable of forming throw beads and plastic doubloons.

To be fair, the process is still prohibitively expensive.

By Kato's estimations, the first batch of biodegradable beads could cost as much as $40,000 for 3,000 necklaces, about $13 per necklace. Kato hopes that optimizing the process could reduce the cost to as little as $1 or less per necklace — though producing at scale would require algae ponds the size of football fields.

One potential solution: Kato believes there may be a collaborative tie-in with Lousiana's crawfish and aquaculture industries.

Festivals and celebrations produce large amounts of excess waste. A 2017 study found that major music festivals, like Coachella, produce almost 107 tons of waste, much of which goes unrecycled or sits in landfills for hundreds of years.

By contrast, biodegradable festival tchotchkes made from Kato's process degrade in the soil in about one to two years. The new application of technology to festival culture could enable us all to have a little more fun with a little less guilt.

“I believe we can change and do better," Kato said. "We have great resources to make our Mardi Gras celebrations more sustainable and to protect our environment and health."

We May Not Be Catching as Many Fish as We Were Two Decades Ago
2. 22. 18
Read More
Hey Cousin
Elon Musk Is Hiring Relatives at Twitter in Literal Nepotism
4:04 PM
Read More
Shark Week
Scientists Stumble Upon Huge Graveyard of Sharks, Deep Under Ocean
3:21 PM
Read More
+Social+Newsletter
TopicsAbout UsContact Us
Copyright ©, Camden Media Inc All Rights Reserved. See our User Agreement, Privacy Policy and Data Use Policy. The material on this site may not be reproduced, distributed, transmitted, cached or otherwise used, except with prior written permission of Futurism. Articles may contain affiliate links which enable us to share in the revenue of any purchases made.
Fonts by Typekit and Monotype.