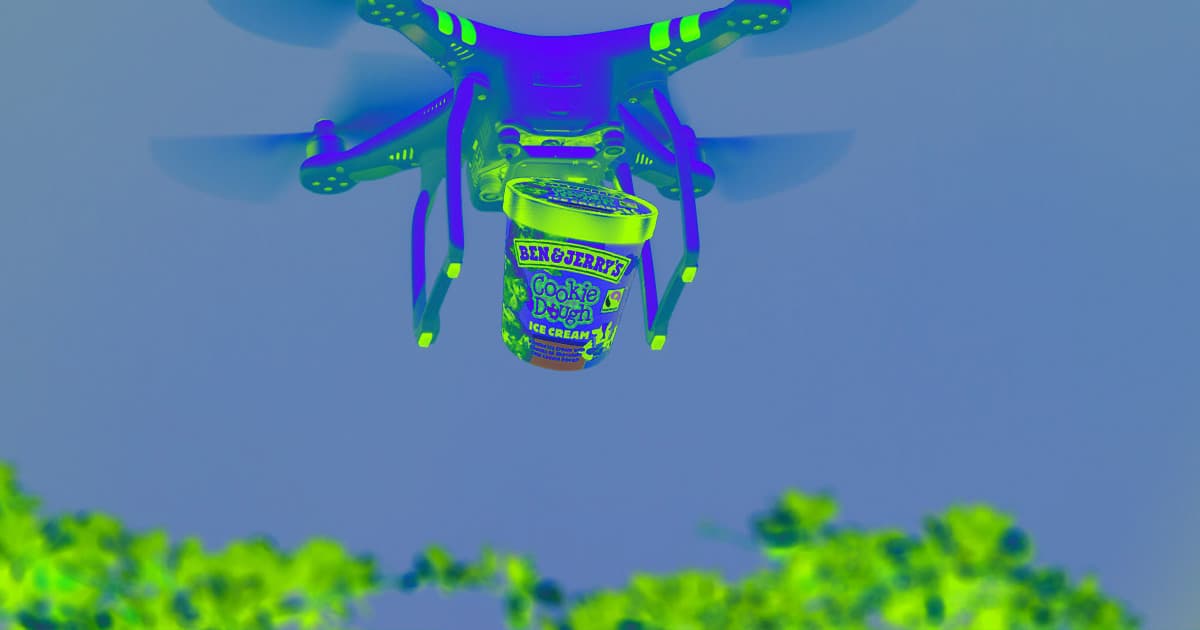 The only thing better than ice cream might be ice cream that flies directly to your house.

The only thing better than ice cream might be ice cream that flies directly to your house.

Soon, you might not have to go to the nearest grocery store to satisfy your ice cream craving. Your ice cream could come to you — via a drone.

On Tuesday, drone startup Terra Drone Europe announced that it had partnered with Unilever, the parent company of Ben & Jerry's, to test a drone delivery system for the ice cream maker's beloved ice cream cups.

Terra Drone demonstrated how the ice cream delivery system would work at a recent Unilever investor event, according to a press release.

For the demo, Terra fitted a multi-copter drone with a special container designed to house three of Ben & Jerry's 72-gram mini cups. After loading up the container, Terra Drone showed how the drone could fly a predetermined path within the Unilever facility.

The next step in the partnership will see Terra Drone delivering Ben & Jerry's to people in New York, according to the press release.

However, the release doesn't say when those deliveries might kick off, or whether they'll be statewide or limited to just certain parts of New York. Neither Unilever nor Ben & Jerry's responded to PC Mag's request for comment on the program, either.

That means that, for now, we'll just have to be satisfied with the knowledge that ice cream will reportedly be zipping around overhead somewhere in New York at some point in time.

Matternet Is Expanding Drone Delivery to Hospitals in Switzerland
9. 27. 17
Read More
A Flying Warehouse? New Amazon Patent Reveals the Potential Future of Retail
1. 3. 17
Read More
Autonomous Drones Are Delivering the Mail in France
12. 20. 16
Read More
+Social+Newsletter
TopicsAbout UsContact Us
Copyright ©, Camden Media Inc All Rights Reserved. See our User Agreement, Privacy Policy and Data Use Policy. The material on this site may not be reproduced, distributed, transmitted, cached or otherwise used, except with prior written permission of Futurism. Articles may contain affiliate links which enable us to share in the revenue of any purchases made.
Fonts by Typekit and Monotype.