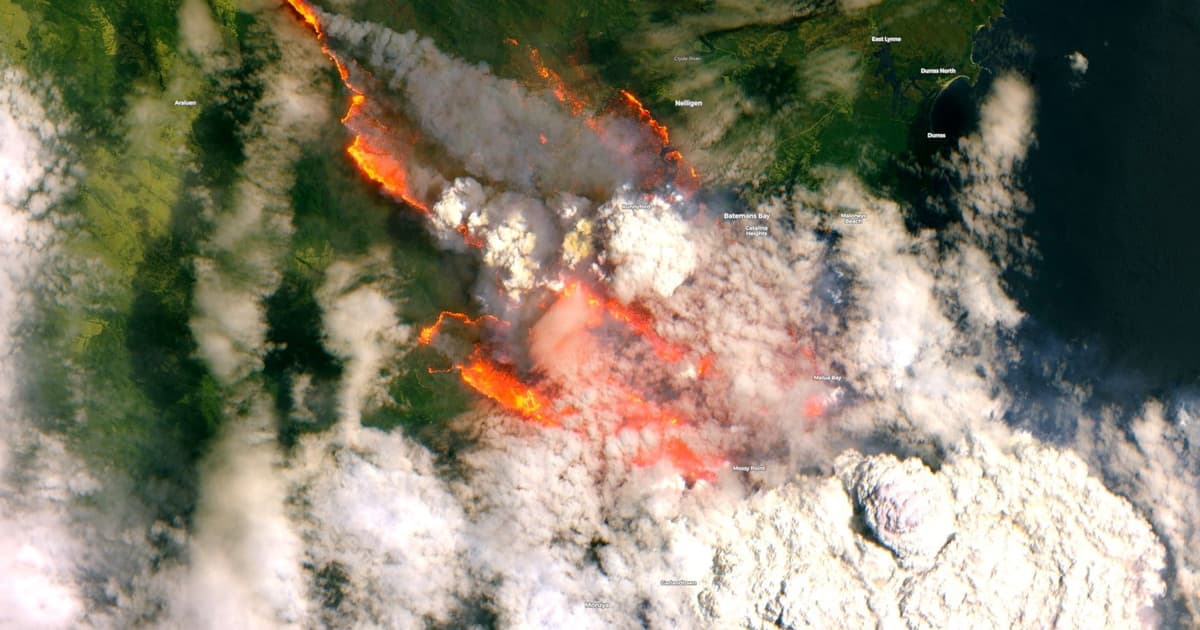 These satellite images put the catastrophe in terrifying context.

These satellite images put the catastrophe in terrifying context.

Australia is in the midst of an environmental catastrophe, with raging wildfires making parts of the nation look like a blood-red apocalyptic hellscape.

As dramatic as the scene on the ground might be, though, the view from above may be even more disturbing — as images of the wildfires taken from space show the full extent of the devastation.

On Friday, Business Insider published a series of images and videos of the wildfires taken from space.

One particularly striking visual is courtesy of the Japan Meteorological Agency's Himawari-8 satellite, which photographs the Earth every 10 minutes. The agency produced an animation of the scene in Australia from space by stringing together a day's worth of the images, providing a grim off-world view of both the brushfires and their smoke plumes.

Another powerful image shared by Business Insider shows what the situation looks like during the day from the perspective of the European Space Agency's Sentinel-2 satellite. It was taken on December 31 over the bushfire in Bateman Bay, Australia, and it's impossible to even see the ground in some parts of the photo through all of the heavy smoke.

As many of us in the #EU are getting ready to celebrate #NYE2020, our thoughts are with all those affected by disasters, with refugees, with firefighters, emergency managers, paramedics etc. that are on duty in 🇦🇺 & all over#Sentinel2🇪🇺🛰 image of the Bateman Bay #NSW area 31/12 pic.twitter.com/L9Do8wKRPc

As of Friday, the wildfires have killed at least 19 people and destroyed more than 1,400 homes. They're now so big, they're even generating their own self-perpetuating weather phenomena — and according to experts, Australia's situation will likely get worse before it gets better.

"We don't usually see fires like this until January or February, but these have been going on since spring," Australia-based climate scientist Sarah Perkins-Kirkpatrick told NBC News. "It's already the worst fire season on record, and we're really just in our first month of summer."

More on wildfires: Devastating Fires in Amazon Rainforest Can Be Seen From Space

Tech Hub
The Skies in California Basically Look Like the Apocalypse Right Now
9. 9. 20
Read More
Fire Starters
Australia Arrests Dozens for Starting Bushfires on Purpose
1. 7. 20
Read More
Three Seasons
By 2050, Winter Will No Longer Exist in Australia, Say Researchers
3. 12. 19
Read More
+Social+Newsletter
TopicsAbout UsContact Us
Copyright ©, Camden Media Inc All Rights Reserved. See our User Agreement, Privacy Policy and Data Use Policy. The material on this site may not be reproduced, distributed, transmitted, cached or otherwise used, except with prior written permission of Futurism. Articles may contain affiliate links which enable us to share in the revenue of any purchases made.
Fonts by Typekit and Monotype.