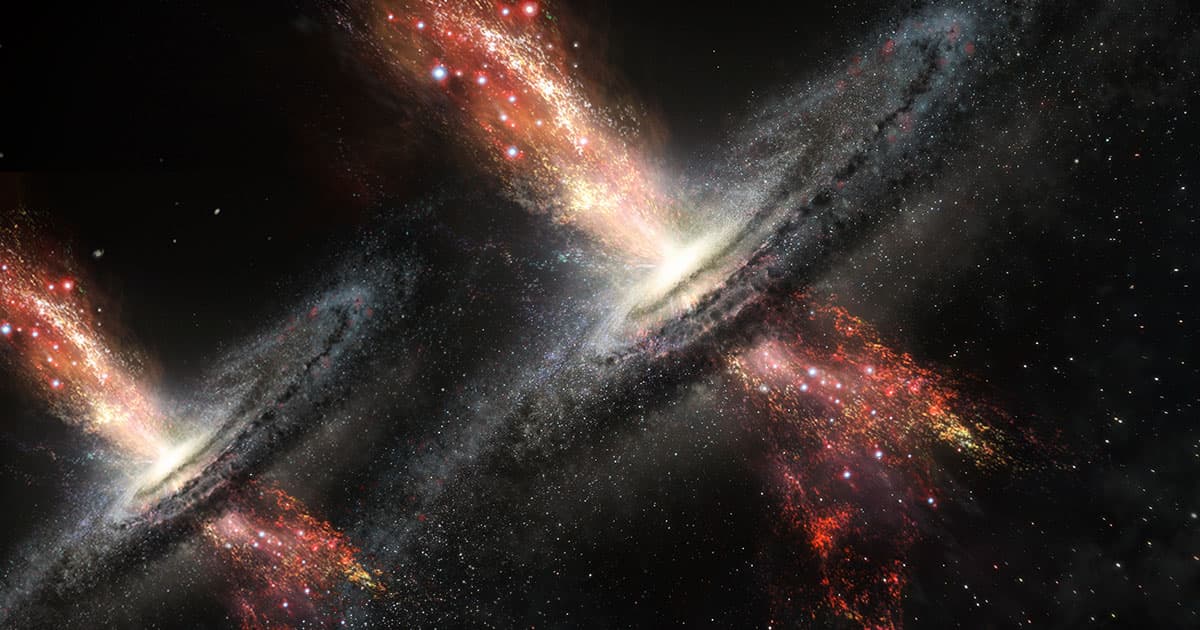 Astrophysicist Says That Supermassive Black Holes May Have "Friends"

At least someone in the universe isn't alone.

At least someone in the universe isn't alone.

Oh my god, y'all — the supermassive black holes at the heart of galaxies like our Milky Way may have BESTIES.

As researchers at the University of California Los Angeles announced today, there's new evidence to suggest that Sgr A* — the supermassive black hole at the center of our home galaxy — may have a "friend," or neighboring black hole that orbits it.

But first, let's back up to a larger astrophysics theory to get the full picture of this galactic bromance.

Nobody is exactly sure, UCLA astrophysicist Smadar Naoz wrote in the announcement, why most galaxies revolve around supermassive black holes like Sgr A*. Noaz's and her team's theory is that they do so because we are orbiting not one but two black holes that may be in similar formations to binary star systems.

The prevailing concept behind galaxy formation is that way back, around 100 million years into the universe's existence, when the first stars began dying, their deaths also created the first black holes, whose gravitational pulls were so dense that they became the center of "modern" galaxies.

Galaxies evolved, Naoz wrote, by colliding and merging with each other — and those collisions resulted in supermassive black holes that are exponentially denser than our Sun.

But what if, instead of just creating one black hole around which galaxies formed, these intergalactic mergers and acquisitions resulted in two — one supermassive, and one smaller?

"But that doesn’t mean that a smaller companion black hole cannot still hide there," she wrote, adding that it's possible Sgr A*'s smaller friend "may not alter the orbit of SO-2 in a way we can easily measure."

While it's just a theory for now, this insight into galactic formation and its symbiotic relationship with these gigantic atom-eating celestial bodies could change the game when it comes to how we study black holes, both supermassive and otherwise.

And if nothing else, it's nice to know that even black holes may not be alone in the universe.

READ MORE: "Supermassive black hole at the center of our galaxy may have a friend" [UCLA]

More on black holes: Uh Oh, Turns Out the Universe Might Be Making Black Holes Even Bigger

Outing Life
Swiss Government Scientist Says We May Be on the Brink of Discovering Alien Life
Sep 13
Read More
Planetary Seeds
Interstellar Visitor Like 'Oumuamua May Have Formed Earth's Core
3. 14. 19
Read More
Black Hole Sun
Here's the Best-Ever Image of the Black Hole Devouring Our Galaxy
1. 21. 19
Read More
+Social+Newsletter
TopicsAbout UsContact Us
Copyright ©, Camden Media Inc All Rights Reserved. See our User Agreement, Privacy Policy and Data Use Policy. The material on this site may not be reproduced, distributed, transmitted, cached or otherwise used, except with prior written permission of Futurism. Articles may contain affiliate links which enable us to share in the revenue of any purchases made.
Fonts by Typekit and Monotype.