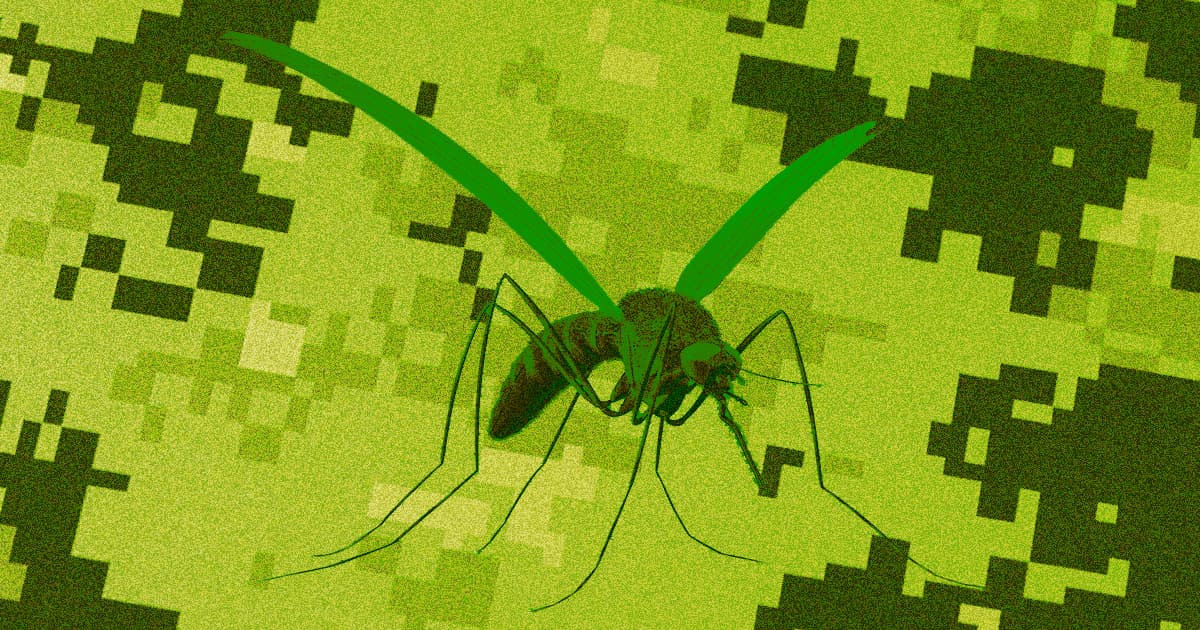 The Army Gene-Hacked Disease-Spreading Mosquitoes To Make Them Infertile

Scientists working for the US Army Research Laboratory found a new way to genetically alter the mosquito Aedes aegypti in a way that can decimate wild populations, hopefully keeping diseases like Zika or dengue from spreading.

Not only did the genetic alteration render males infertile, but those male mosquitoes could actually transfer that infertility to the female population by mating with them, according to research published in the journal PNAS.

"This is yet one more important and exciting example of how synthetic biology tools are demonstrating unparalleled utility," James Burgess, a DEVCOM program manager for the Army Research Laboratory, said in a press release. "In this case, it's a precision increase from chainsaw to a scalpel leading to the correct biochemical outcome that could substantially reduce the population of a very infectious mosquito."

In order for the system to work, however, the females need to be isolated with the males. The researchers found that females needed to mate with multiple different mosquitoes before they also became infertile. After four hours of being in a cage with only gene-hacked males, the fertility rates of the females dropped down to just 20 percent.

"Essentially, all of the females remained sterile," University of California Santa Barbara biologist and study coauthor Craig Montell said in the press release. "This confirmed that males could suppress female fertility without producing sperm."

That number improved alongside longer exposure to the males, but that raises questions of real-world feasibility since both gene-hacked and healthy, wild-type males will be competing for mates out in the wild.

The challenge is that even if wild females mate with gene-hacked males, a wild Aedes aegypti population could easily recover from an 80 percent drop in fertility, Montell explained in the release.

That doesn't necessarily mean that the infertility alterations don't work, but that any successful deployment of this mosquito gene-hacking tech would require repeat drops of males in order to actually keep the population down and make a noticeable difference when it comes to disease transmission.

Logistical questions of that sort also bogged down a controversial experiment in the Florida Keys, where the biotech company Oxitec released similarly gene-hacked mosquitoes. The Oxitec experiment drew the local community’s ire for a number of reasons, including the fact that it involved a live release, making it a different situation from this new lab experiment. But it does illustrate where this Army research must inevitably head — gene-hacked bugs released into the wild — if it progresses at all.

There They Go
Biotech Company Officially Unleashes Gene-Hacked Mosquitoes in Florida
5. 5. 21
Read More
Gene-Hacked Blood Suckers
Residents Furious at Release of 500 Million Gene-Hacked Mosquitoes
4. 26. 21
Read More
Greater Good
China Isn’t Afraid to Be the "Bad Guy" of CRISPR Research
7. 31. 19
Read More
+Social+Newsletter
TopicsAbout UsContact Us
Copyright ©, Camden Media Inc All Rights Reserved. See our User Agreement, Privacy Policy and Data Use Policy. The material on this site may not be reproduced, distributed, transmitted, cached or otherwise used, except with prior written permission of Futurism. Articles may contain affiliate links which enable us to share in the revenue of any purchases made.
Fonts by Typekit and Monotype.