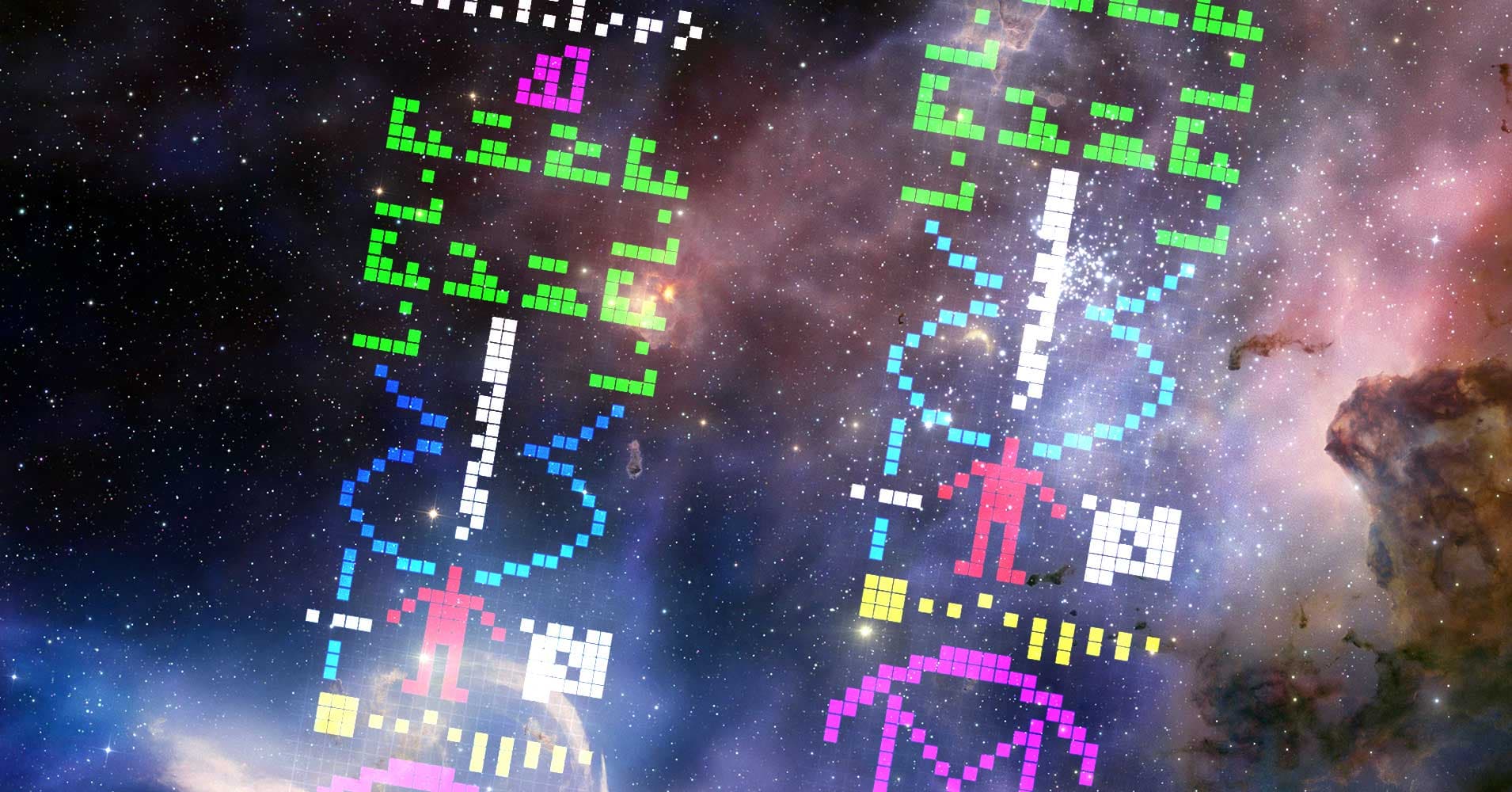 Scientists Want Your Help Crafting a Message to Aliens

They want to update humanity's most famous message to ET.

They want to update humanity's most famous message to ET.

Humans aren't just on the hunt for aliens with radiotelescopes and exoplanet research  — we're also actively trying to help aliens find us.

One of the most well known of these efforts kicked off 44 years ago with the transmission of the Arecibo Message from Puerto Rico's Arecibo Observatory, which was sent to a star cluster roughly 21,000 light-years away. That radio signal marked humanity's first deliberate attempt to draw the attention of extraterrestrials, and now the Observatory is asking the world to help it write an updated message to aliens.

The original Arecibo Message consists of 1,679 binary digits that convey a wealth of information about life on Earth, including the elements that comprise DNA, the location of our planet within the solar system, and the basic dimensions of the average human.

When converted into graphics, the message looks something like the world's weirdest game of Tetris.

On Sunday, the Planetary Habitability Laboratory at the University of Puerto Rico Arecibo announced the Arecibo Observatory's "global challenge to construct a new Arecibo Message."

According to a press release, the observatory kicked off a week-long celebration of its 55th year in operation on Sunday, and at some point during the week, it will reveal more details on what it's calling "the #NewAreciboMessage global challenge."

This challenge stirs up mixed feelings.

American astronomer Frank Drake wrote the first Arecibo Message with the help of Carl Sagan and others, and there's no word yet on how the observatory thinks we might be able to improve upon a message crafted by some of the most brilliant minds in science.

Then there's the issue of whether we should even be reaching out in the first place — after all, there's no telling who our message might reach, and their reaction could be less-than-friendly.

Still, if you've ever wanted to "talk" to aliens, looks like this just might be the opportunity you were waiting for. We suggest thinking long and hard about what you want to say.

A Beautiful, 20-Year Old "New" Discovery: Jupiter Moon's Massive Liquid Plumes
5. 14. 18
Read More
Despite Opposition, METI Will Still Reach Out to Alien Life in 2018
9. 16. 17
Read More
Scientists Assert That We Will Make Contact With Aliens in the Next Decade
5. 14. 17
Read More
+Social+Newsletter
TopicsAbout UsContact Us
Copyright ©, Camden Media Inc All Rights Reserved. See our User Agreement, Privacy Policy and Data Use Policy. The material on this site may not be reproduced, distributed, transmitted, cached or otherwise used, except with prior written permission of Futurism. Articles may contain affiliate links which enable us to share in the revenue of any purchases made.
Fonts by Typekit and Monotype.