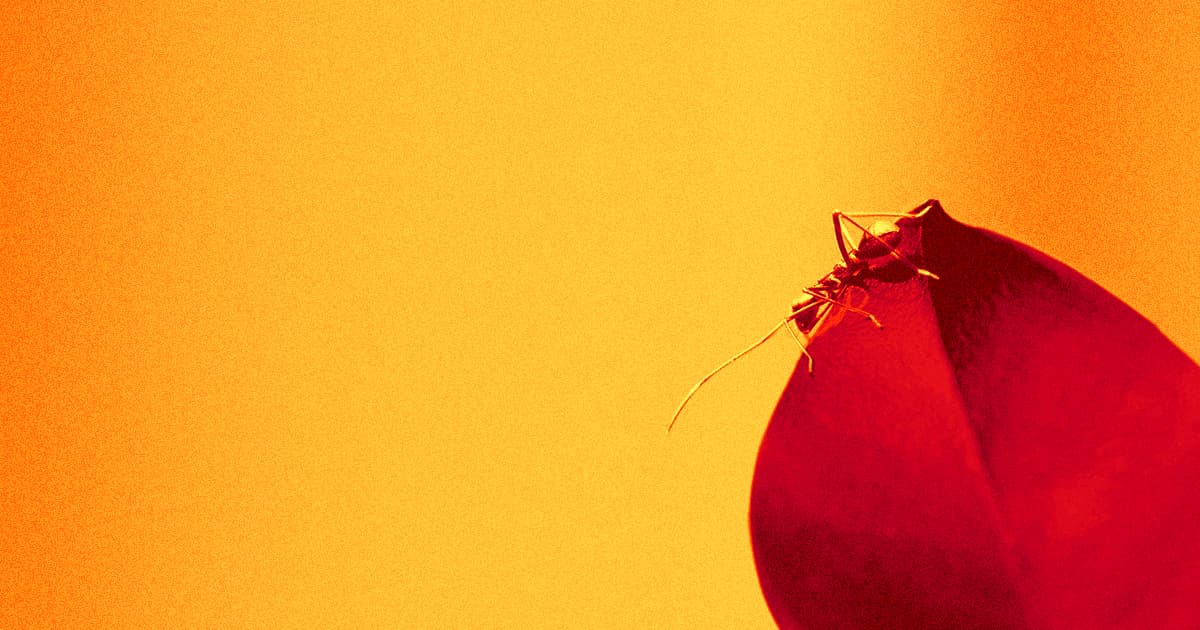 This Type of Ant Can Shrink and Regrow Its Brain

The ants undergo a bizarre transformation while they fight over their colony's throne.

The ants undergo a bizarre transformation while they fight over their colony's throne.

When the queen of an Indian jumping ant dies, other females immediately begin to compete for the throne, undergoing a bizarre internal transformation in the process.

A team of scientists studying the bizarre ritual found that the Indian jumping ant can actually change the size of its brain, according to research published in the journal Proceedings of the Royal Society B on Wednesday. So far, it's the only insect known to be capable of both shrinking and regrowing its brain later on, The New York Times reports, thanks to a complex process that's likely meant to reallocate and conserve energy as the ants vie to take on a new role.

When the queen croaks, most of the female ants in a colony will immediately begin to lash each other with their antennae in a grand battle for the throne. Eventually, a handful of victors — called, and we are not joking, "gamergates" — emerge and begin to reproduce en masse.

Gamergates and female worker ants look very similar, but gamergates actually have much tinier brains, according to the study — especially in regions related to vision and cognition.

"If you look inside their bodies, you can see the huge transformations that they undergo," lead study author and Kennesaw State University biologist Clint Penick told the NYT.

Because the queen-like gamergates live out their lives mating and laying eggs in the darkness of the colony, they don't really need to be able to see or scavenge for food. And since the brain is an extremely energy-intensive organ, the ant simply does away with those parts to save on fuel.

"Worker ants need a large brain to deal with these cognitive tasks, but gamergates don’t need to think that much," Penick told the NYT. "Once they win the tournament, they become little more than egg-laying machines."

The scientists thought that gamergates would die off when they plucked them out of the colony — but instead they transformed right back into their former worker ant selves, regrowing their brains to the exact same size they had been before the tournament.

READ MORE: These Ants Shrink Their Brains for a Chance to Become Queen [The New York Times]

More on ants: Researchers Used CRISPR to Manipulate the Social Activities of Ants

Buzz Buzz
Scientists Hijack Fruit Fly Brains to Remote Control Their Wings
Jul 20
Read More
Heady Stuff
Experiment Suggests That Consciousness May Be Rooted in Quantum Physics
Apr 19
Read More
Gene-Hacked Blood Suckers
Residents Furious at Release of 500 Million Gene-Hacked Mosquitoes
4. 26. 21
Read More
+Social+Newsletter
TopicsAbout UsContact Us
Copyright ©, Camden Media Inc All Rights Reserved. See our User Agreement, Privacy Policy and Data Use Policy. The material on this site may not be reproduced, distributed, transmitted, cached or otherwise used, except with prior written permission of Futurism. Articles may contain affiliate links which enable us to share in the revenue of any purchases made.
Fonts by Typekit and Monotype.