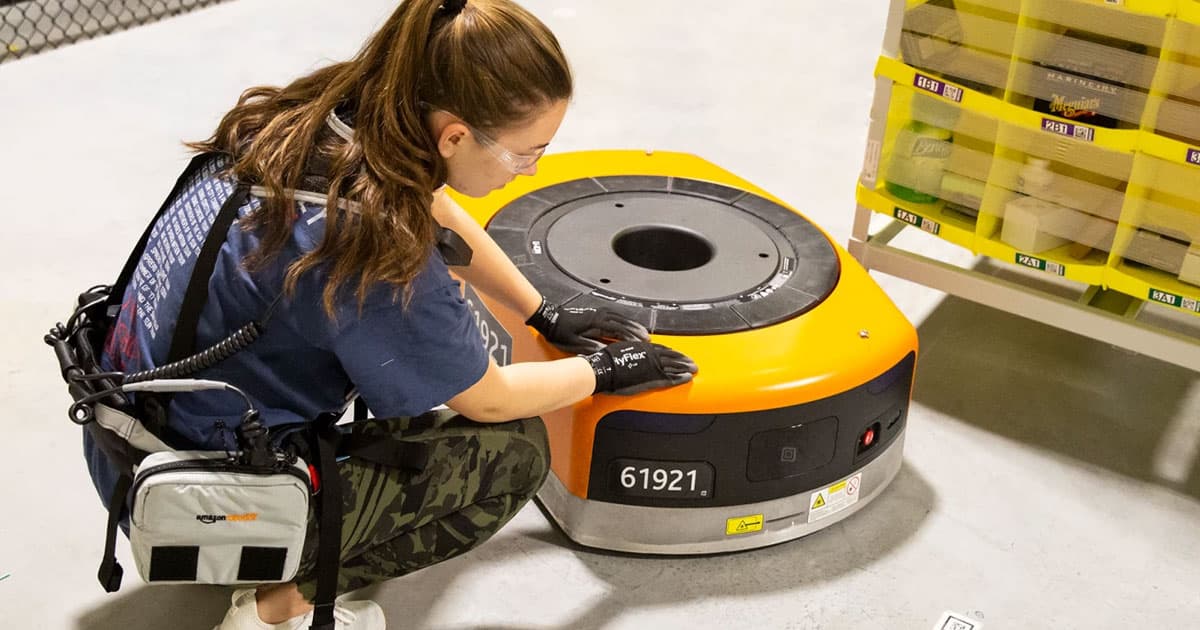 Amazon Built Vests to Protect Warehouse Workers From Its Robots

Don't take off the vest!

Don't take off the vest!

We already knew that working at one of Amazon's warehouses could be hazardous. Amazon Robotics' latest product could protect workers — but its existence is a strange vision of human-robot relations.

TechCrunch reports that the online retail giant's in-house design firm had to come up with a solution — in the form of a vest — to protect workers from warehouse robots. The vest sends signals to nearby robots telling them to slow down in order to avoid a collision.

"In the past, associates would mark out the grid of cells where they would be working in order to enable the robotic traffic planner to smartly route around that region," Amazon Robotics VP Brad Porter told TechCrunch. "What the vest allows the robots to do is detect the human from farther away and smartly update its travel plan to steer clear."

There have been a couple of incidents between robots and warehouse workers in the past. A robot malfunctioned in an Amazon warehouse in New Jersey back in December, tearing open a can of bear spray, and injuring dozens of workers in the vicinity.

But safety advocates are paying attention. Last year, the National Council for Occupational Safety and Health put Amazon on its "dirty dozen" list of the most dangerous U.S.-based companies to work for, nothing that seven workers were killed at Amazon's warehouses since 2013.

It's a gesture of goodwill for Amazon's warehouse workers, but will it be enough to keep the robots at bay? Let's hope we won't find out the hard way.

FROM THE DEPT. OF THINGS TO BUY
The Best Smart Glasses for 2023
10. 18. 22
Read More
From the Dept. of Things to Buy
Get the Echo Show 5 at Half-Price During Labor Day Deals on Amazon Hardware
9. 4. 22
Read More
From the Dept. of Buying Things
How to Stream “Lord of the Rings: The Rings of Power” on Amazon
8. 16. 22
Read More
+Social+Newsletter
TopicsAbout UsContact Us
Copyright ©, Camden Media Inc All Rights Reserved. See our User Agreement, Privacy Policy and Data Use Policy. The material on this site may not be reproduced, distributed, transmitted, cached or otherwise used, except with prior written permission of Futurism. Articles may contain affiliate links which enable us to share in the revenue of any purchases made.
Fonts by Typekit and Monotype.