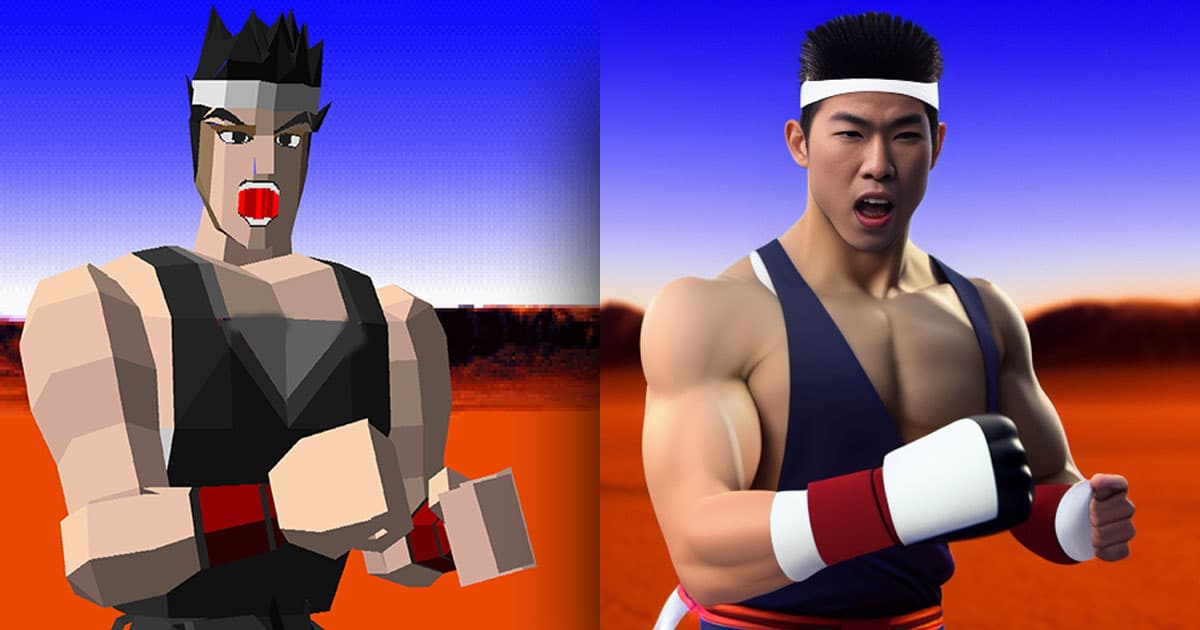 When Sega released Virtua Fighter in 1993, it was a game changer — literally. Widely hailed as the first fighting game with full 3D graphics, it upped the technical prowess of a genre that had been largely confined to 2D sprites, with titles like Tekken following the next year with 3D graphics of its own.

Now, in the age of both remastered gaming classics and the boom in AI generated images, it’s fitting to revisit Virtua Fighter with a technological new coat of paint.

A Twitter thread from artist Colin Williamson shows us just that, thanks to the power of Stable Diffusion. Normally a text to image model, Williamson used an image-to-image variation called Automatic1111, according to Williamson's tweet.

And the results are pretty impressive — not to mention amusing, intentionally or otherwise.

Akira. I never realized how super-jacked these models were. pic.twitter.com/qXrVmZTmRZ

With the help of the AI model, Williamson transports this early 90s titles straight into photorealism territory, looking less like a graphical upgrade and more like actors portraying the characters in a cutscene, to an extremely comical effect.

"When I played this game back in middle school, I was like 'That's it. Graphics can never get better than this,'" said Williamson in a tweet. "And my dad was like 'I'm not so sure, this looks kind of crappy.'"

In hindsight, their dad wasn't wrong. Getting it to look just right though, even with an all powerful AI, takes quite a bit of tinkering.

"Once I found a good prompt, I'd do a batch of around 50 and cherry-pick the funniest ones," Williamson continued. "I tried this thing called 'negative prompting,' where you tell the AI stuff like 'please don't draw messed-up-looking hands,' which does an excellent job in that now your characters have only six fingers instead of seven."

More on AI art: AI Dreams Up What Your Fave Dead Celebs Would Look Like Today

Game AI
A Neural Network Dreams up This Text Adventure Game as You Play
9. 5. 19
Read More
Gamer Fuel
Humans Teamed up With a New Kind of AI to Crush a Notoriously Difficult Video Game
11. 27. 18
Read More
Artificial Intelligence Is Making Video Game Levels So Good That Even Other AI Thinks They’re Man-Made
5. 8. 18
Read More
+Social+Newsletter
TopicsAbout UsContact Us
Copyright ©, Camden Media Inc All Rights Reserved. See our User Agreement, Privacy Policy and Data Use Policy. The material on this site may not be reproduced, distributed, transmitted, cached or otherwise used, except with prior written permission of Futurism. Articles may contain affiliate links which enable us to share in the revenue of any purchases made.
Fonts by Typekit and Monotype.