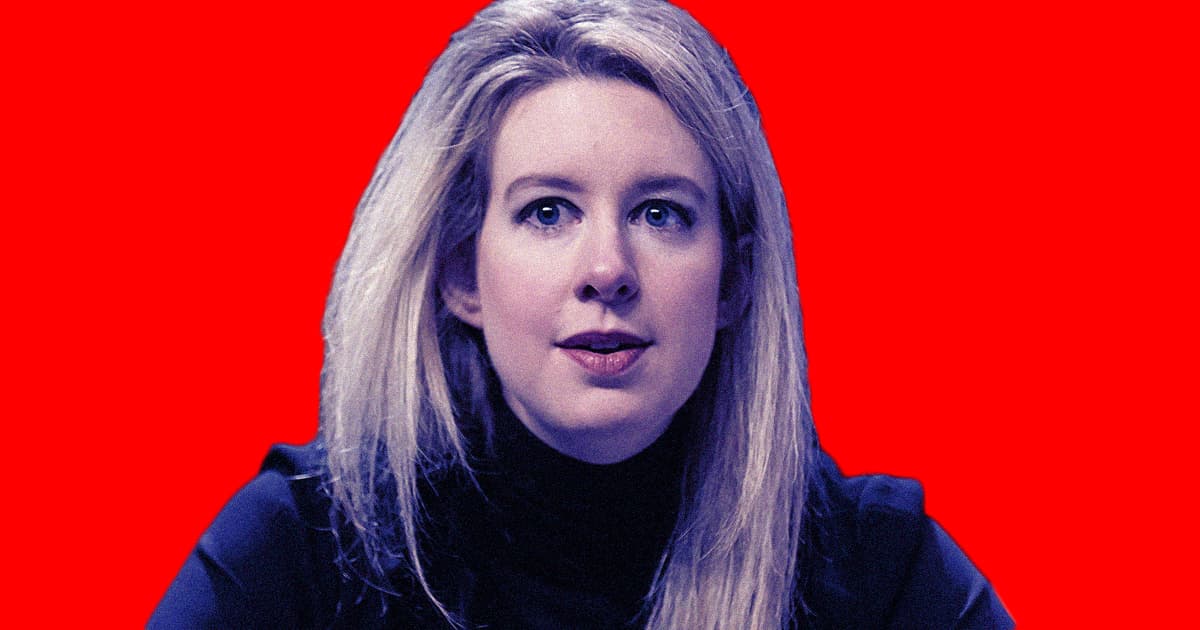 The nearly 600 pages of private text and Skype messages, sent between June 2011 and July 2016, were obtained by CNBC earlier this week.

The texts demonstrate how Holmes professed full confidence in her blood-testing company — despite the venture imploding spectacularly in 2015.

In one notable text, from November 2014, Holmes told Balwani that she had "total confidence in myself best business person of the year," according to CNBC, a rather ironic snapshot given Theranos and Holmes' fate.

Less than a year later after the message was sent, a Wall Street Journal reporter broke a story on the immense troubles plaguing Theranos and Holmes. By 2016, the Food and Drug Administration, the Centers for Medicare & Medicaid Services, and the Securities and Exchange Commission (SEC) were all investigating the company.

Theranos' original goal was to develop a small "lab-on-a-chip" that could deliver specific dosages of various medications and scan the blood for changes, a potentially revolutionary piece of medical equipment.

But the idea never materialized despite billions being poured into the venture. In 2018, both Balwani and Holmes were charged with "massive fraud" by the SEC, according to a statement at the time.

Despite the legal troubles, less than a year before the controversy Holmes still appeared to be fully confident of her company's future.

"My new life as of this night and forever more: - total confidence in myself best business person of the year – focus – details excellence – don’t give what anyone thinks – engage employees in meetings by stories and making it about them (ie prepare well)," Holmes texted Balwani in 2014.

She even had to follow up ten minutes later with "no response?"

Balwani then responded with "awesome. U r listening and paying attention..."

Holmes seemed to have no idea of just how far her billion dollar venture would end up falling, from self-proclaimed "business person of the year" to having one of the most tarnished  reputations in all of Silicon Valley in a matter of a year.

They are now facing the consequences of their actions, though. Holmes' trial started in August. Balwani will be on trial some time next year.

READ MORE: Elizabeth Holmes’ private texts reveal she described herself as the ‘best business person of the year’ [CNBC]

Read This Next
Heating Up
Employees at TikTok Apparently Have a Secret Button That Can Make Anything Go Viral
Nothing's Real Anymore
JPMorgan Says Startup Tricked It Into an Acquisition by Cooking Up Millions of Fake Users
Enemy Mine
Elon Musk Now Denies That His Family's Emerald Mine Existed, In Spite of Previously Bragging About It
Sounding Off
Adult Performers React to Law Requiring Photo ID to Watch Online Porn
Will Somebody Think of the Children?
Mom Horrified by What Her Kids Are Seeing in Roblox
More on Future Society
Spreadsheet Guy
3:23 PM on the byte
Sam Bankman-Fried Posts Excel Docs That He Says Shows Nothing Was His Fault
Nip Split
Jan 22 on the byte
Meta Board Trashes Facebook's "Convoluted and Poorly Defined" Female Nipple Rule
Crypto Cacophony
Jan 22 on the byte
Residents Annoyed by Crypto Mine That Emits Constant, Horrible Noise
READ MORE STORIES ABOUT / Future Society
Keep up.
Subscribe to our daily newsletter to keep in touch with the subjects shaping our future.
+Social+Newsletter
TopicsAbout UsContact Us
Copyright ©, Camden Media Inc All Rights Reserved. See our User Agreement, Privacy Policy and Data Use Policy. The material on this site may not be reproduced, distributed, transmitted, cached or otherwise used, except with prior written permission of Futurism. Articles may contain affiliate links which enable us to share in the revenue of any purchases made.
Fonts by Typekit and Monotype.