Heavy elements primarily formed, not from supernova explosions, but from more exotic catastrophes. 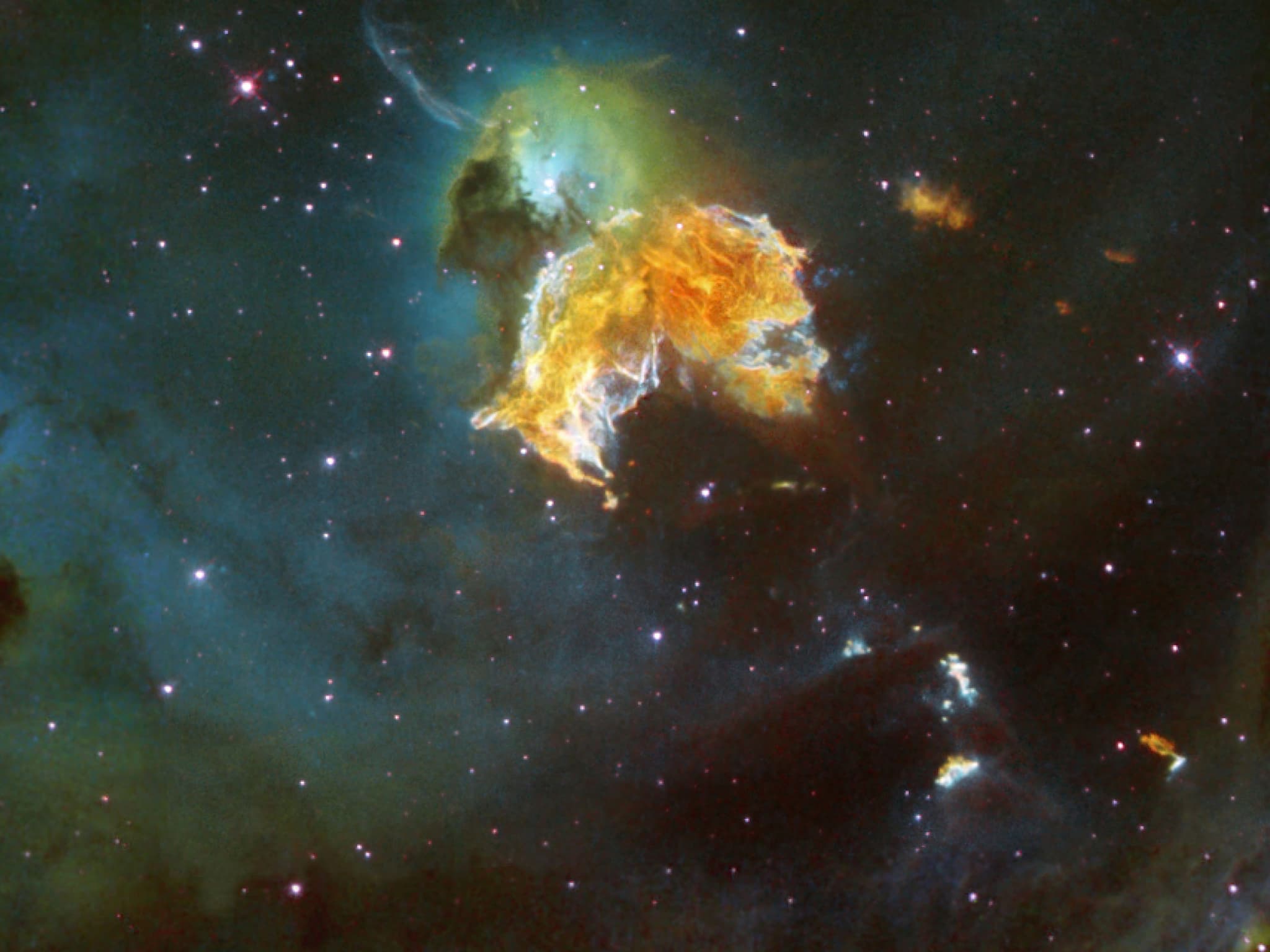 Astrophysics has managed to paint a pretty accurate picture of how the elements were formed. Hydrogen and helium were created in those first staggering moments after the Big Bang; “metals” (all heavier elements) were later created through nuclear fusion in the central furnaces of supermassive stars.

The problem is, once iron and nickel are formed, the fusion process requires more energy than it releases, which has predictable results—the star collapses. So how do heavier elements such as gold, lead, copper, and platinum form?

The explanation is “neutron capture,” in which existing heavy elements accrete neutrons one at a time; subsequently, these neutrons beta decay into protons and voilà—you have a ready-made new element. Neutron capture may happen slowly, over long periods in stellar cores, or all at once, through a catastrophic neutron bombardment.

Ultimately, astronomers are undecided about how such elements are formed—in supernova explosions, which are relatively common, or in something rare and exotic, such as the merger of neutron stars.

Surprisingly, a new study of the dwarf galaxy Reticulum II hints that it is the latter.

Reticulum II was only discovered last year. Located in the southern constellation of “The Net,” it is an ultra-faint dwarf galaxy that is only about 200 light-years long. At 97,000 light-years away, it is a close companion of the Milky Way—in fact, our galaxy is slowly tearing it apart.

But its nearness, and the high number of bright stars it possess, makes it ideal for studying stellar chemistry. Furthermore, such dwarf galaxies are primitive survivals of ancient cosmic history—like “galactic coelacanths,” whose primitive stellar anatomy serves as a window onto distant times.

The new research shows that of Reticulum II’s nine brightest stars, seven have a greater amount of heavy elements formed from rapid neutron capture than other dwarf galaxies; this fact, coupled with the excessive amounts of neutron capture-derived elements in the galaxy, seems to prove that a rarer mechanism than supernovae.

“Producing rapid neutron capture elements in a neutron star merger explains these observations beautifully,” says Anna Frebel of MIT, a coauthor of the paper, which appears in Nature.

Ancient stars in the Milky Way betray the same signatures of neutron capture, suggesting that an identical process obtains in larger galaxies as in the dwarfs—and that even Earth’s heavy elements were similarly formed.

Which means the gold in that piece of jewelry you’re wearing may have been born inside colliding neutron stars.

Read This Next
Name Game
NASA May Still Rename James Webb Telescope Over Homophobia Controversy
Search for Life
Former Astronaut Suggests Specific Planet for James Webb to Search for Life
Far Out
Proposed Mission Would Explore Interstellar Object ‘Oumuamua
History Repeating
Astrobiologist: Humans Are Going to Ruin Outer Space
On The Event Horizon
Here's Why Everyone's so Excited About the Black Hole Image
More on Off World
EDM in Space
9:35 PM on the byte
Billionaire Paying for Steve Aoki to Join Him on SpaceX Moon Vacation
Pale Blue Shat
5:28 PM on futurism
William Shatner Explains Why His Trip to Space Was Horrible
Cubesat Death
Yesterday on the byte
Another Satellite Released by NASA's Artemis I Just Croaked
READ MORE STORIES ABOUT / Off World
Keep up.
Subscribe to our daily newsletter to keep in touch with the subjects shaping our future.
+Social+Newsletter
TopicsAbout UsContact Us
Copyright ©, Camden Media Inc All Rights Reserved. See our User Agreement, Privacy Policy and Data Use Policy. The material on this site may not be reproduced, distributed, transmitted, cached or otherwise used, except with prior written permission of Futurism. Articles may contain affiliate links which enable us to share in the revenue of any purchases made.
Fonts by Typekit and Monotype.