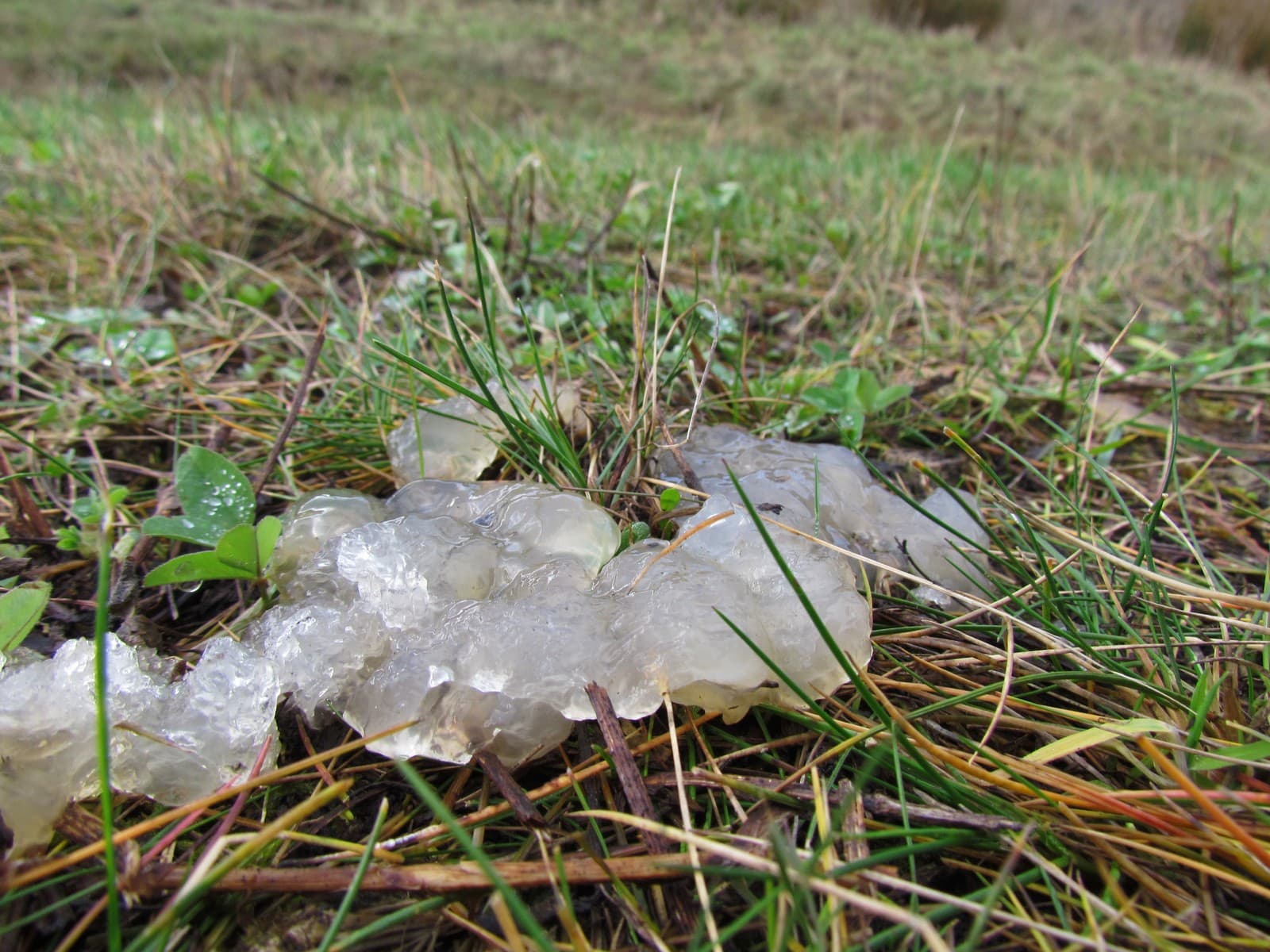 I was reading through a BBC article the other afternoon and saw the term “star jelly” being used by concerned citizens in Scotland. They were sharing experiences where they found “large piles” of the goo around their porches, in wooded areas, and even in their trees.

From the photos of Star Jelly, one can see globs of a gelatinous substance that appears grayish-white or translucent. One citizen even reported seeing a purple version. It often evaporates, according to witness accounts, shortly after appearing. Folklore suggests that the blobs fall from the stars during meteor showers—very Jordy Verill in my opinion (has anyone else seen Creepshow?).

Theories by eye-witnesses (which interestingly, mostly come from the UK) on the origin of the jelly range from it being a communication method from the dead, to a kind of fungus, to stag semen, to something excreted by aliens. Some skeptical citizens even present their case for it being part of a government conspiracy to poison us all. The more I read, the more strange the theories seemed to get. It was evident that this was a mystery to the townspeople, as well as any scientist who had tried to uncover the origins of the goo.

Here are some of the more plausible theories on this star jelly and also some of the more "out-there" ideas. Let me begin by noting that, although one article claimed that the stuff might be edible, I don’t suggest spreading this gunk on your morning toast...

The Beginning of Star Jelly

Let's begin with the first recorded mention of the jelly. Josh Gaddesden wrote about it in the 14th century, suggesting it be used to treat abscesses. Gaddesden's also believed that doctors and midwives were "idiots" who are all trying to kill us rather than cure us, so I don't know if I'd be the first to take his advice and rub mysterious foreign jelly on any of my wounds (or even my body). Throughout the 14th century, the name evolved from "a star which has fallen" to "star slime" then finally to "star jelly." In Veracrus, Mexico, locals even refer to it as “caca de luna,” or, Moon excrement.

The subject even found its way into 19th century literature. Sir Walter Scott mentioned the jelly in his 1825 novel, "The Talisman. He writes, "And thou shalt only light on some foul jelly, which, in shooting through the horizon, has assumed for a moment an appearance of Splendour."

It's actually a pretty funny image; a gelatinous blob flying through the night sky like a shooting star. How majestic.

Perhaps the most widely-read recent mention of star jelly was in Fate Magazine, which focuses on strange and unexplained phenomenon. In 1979 they published an article claiming they'd solved the mystery. They wrote that the substance "consisted of extra terrestrial cellular organic matter which exists as presetellar molecular clouds."  Now if you're like me and had a bit of trouble following that sentence, let me made it a bit easier: Essentially, star jelly came from cosmic objects like the Eagle Nebula.

Pretty, huh? However, as great as it would be to have a chunk of a nebula land in your yard, it is very unlikely that the jelly comes from these clouds. Even the closest molecular cloud to Earth, the Tarus molecular cloud, is 430 lightyears away. In addition, most of the material in these clouds consists of gasses and dust; no globby-goo (that we've observed, at least).

It is also unlikely that the substance comes from meteors (aka, falling stars). Fist, meteors rarely make it to the ground. They burn up in our atmosphere. Second, they are made of rocks or even iron. If they did have a jelly element, it would fry on the way here. Third, none of the accounts  have actually seen it fall from the sky—they just reported seeing it the morning after a meteor shower.

More recent ideas, based on the 2009 sightings across Scotland, suggest that the gelatinous substance could be the remains of frogs, toads, worms, or other creatures. Perhaps a predator spit out a toxic frog after the meal didn't agree with its stomach. Another theory is that the substance is actually a type of algae. The blue-green algae, for example, forms colonies made up of cells in a gelatinous sheath. It’s hard to see on the ground typically, but once it rains, it swells up.

Tony Whitehead, the RSPB's (Royal Society for the Protection of Birds) Public Affairs officer attributed the origins to female amphibian reproduction. He explained, “the spawn is held in a substance known as glycoprotein which is stored in the female’s body...If an animal is attacked by a predator it will quite naturally drop its spawn and the associated glycoprotein.” The glycoprotein is designed to swell on contact with water (in this case, a dewy ground)-- much like the algae mentioned earlier.

The interesting part about all of these theories is that, when tested, it was concluded that the specimen didn't contain any DNA (plant or animal). So it is actually unlikely that the substance has a connection with the animal or plant-life in question. This was just one sample, though. Perhaps the sample taken from the RSPB case was different. Maybe it was the glycoprotein and was just similar in look, but not in composition.

Ultimately, the jury is still out on this one. Perhaps a new paper will solve this conundrum; however, no matter what you read, please don't eat any strange goo you find in the woods. Just don't.