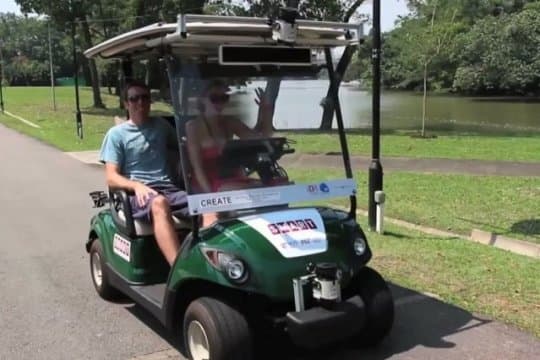 An experiment which was conducted in the span of six days at a public garden in Singapore to test how self-driving golf carts can ferry 500 tourists around winding paths has been made by members of the Singapore-MIT Alliance for Research and Technology. Daniela Rus, a professor in MIT's Department of Electrical Engineering and Computer Science says "We would like to use robot cars to make transportation available to everyone."

During the experiments, they have also tested their online booking system which allows visitors to schedule their own pickup and drop-off trips in 10 specific
stations all over the garden.

The primary difference that SMART's autonomous vehicles have over other experiments and attempts is that they are taking a minimalist solution to the problem with self-driving cars. Rus stated that their vehicles have the necessary instruments needed to operate, but they're not as heavy as those DARPA vehicles or even the Google car.

Read This Next
Deepfaked Neighbors
Trashy TV Prank Show Deepfakes Celebrities Into Jackass-Style Situations
I Have a Dream of Mass Layoffs
ChatGPT Shamelessly Writes Letter Announcing Layoffs While Promoting Execs and Quoting MLK
Bot My Fault
News Site Admits AI Journalist Plagiarized and Made Stuff Up, Announces Plans to Continue Publishing Its Work Anyway
Unforgettable
Guy "Outsources" His Own Memory to AI
Botulism Toxin
CNET's AI Journalist Appears to Have Committed Extensive Plagiarism
More on Artificial Intelligence
AI Asshole
Yesterday on the byte
BuzzFeed Columnist Tells CEO to "Get F*cked" for Move to AI Content
Bad Bots
Yesterday on the byte
Oxford Scientists Warn AI Could Be More Deadly Than Nuclear Weapons
Once a Cheat
Yesterday on the byte
89 Percent of College Students Admit to Using ChatGPT for Homework, Study Claims
READ MORE STORIES ABOUT / Artificial Intelligence
Keep up.
Subscribe to our daily newsletter to keep in touch with the subjects shaping our future.
+Social+Newsletter
TopicsAbout UsContact Us
Copyright ©, Camden Media Inc All Rights Reserved. See our User Agreement, Privacy Policy and Data Use Policy. The material on this site may not be reproduced, distributed, transmitted, cached or otherwise used, except with prior written permission of Futurism. Articles may contain affiliate links which enable us to share in the revenue of any purchases made.
Fonts by Typekit and Monotype.