They want to drop swarms and fill the air. 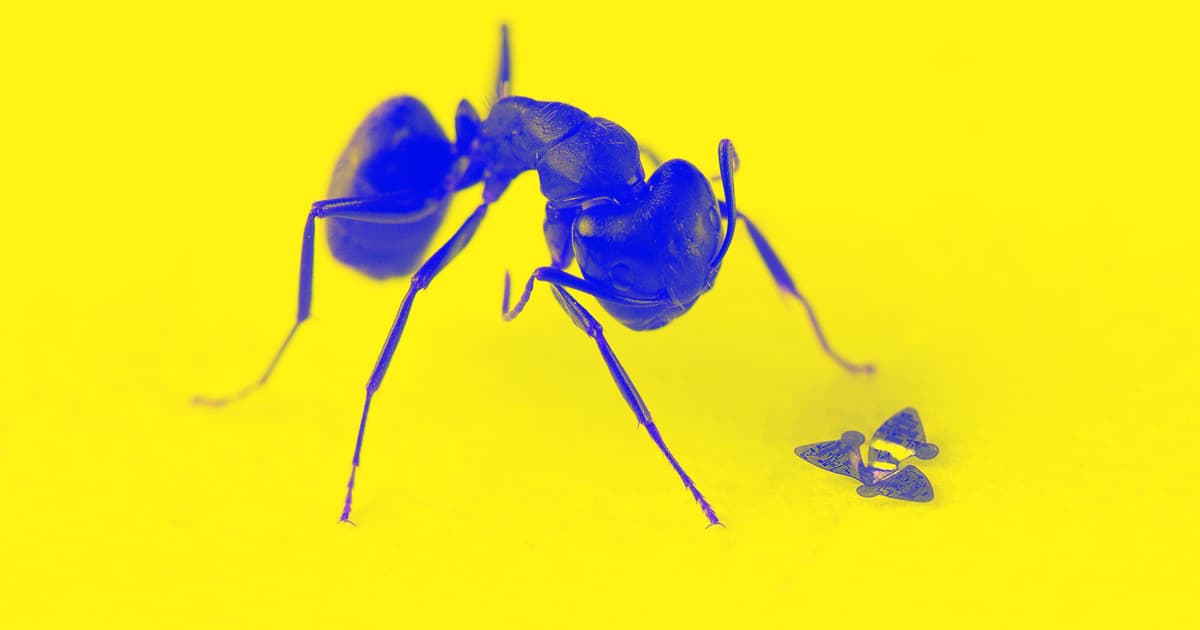 A team of engineers at Northwestern University have built tiny microchips with wings that glide like a maple tree's winged seeds — and they're only about the size of a grain of sand, making them the "smallest-ever human-made flying structures," according to a statement by the university.

The tiny "microfliers" could serve an important purpose by monitoring pollution, airborne diseases, and other environmental contaminants in the air after being ejected from a plane or a tall building.

Swarms of the tiny gliders could form a massive wireless network, gathering important and valuable environmental data without the downsides of bulky monitoring equipment.

The design was inspired by trees that disperse small seeds capable of spinning to slow their descent and allow them to cover a wider area on the ground.

That means the tiny microchips don't have their own means of propulsion or engines. But despite their tiny size, the engineers managed to stuff sensors, power sources, and even antennas for wireless communication into them.

"Over the course of billions of years, nature has designed seeds with very sophisticated aerodynamics," said John Rogers, team lead at Northwestern and co-author of a paper about the microfliers published in Nature this week, in the statement. "We borrowed those design concepts, adapted them and applied them to electronic circuit platforms."

The fact that they can glide for longer periods of time allows them to collect a lot more environmental data over the course of their descent, according to the team.

Rogers and the team were also inspired by pop-up books, which are two dimensional books that can turn into three-dimensional structures when opened, to come up with a novel manufacturing process for the devices.

The team was able to "exploit the most advanced materials and manufacturing methods used by the consumer electronics industry" by printing the devices in "flat, chip-like designs," according to Rogers.

In tests, the engineers were able to include gadgets harvest energy from the ambient environment to power a wireless antenna to transfer data to a smartphone.

This way, prototypes were able to detect particulates in the air or take pH readings, something that could be used to monitor water quality.

The engineers are now working on a fully "bioresorbable" version that dissolve in water once it hits the ground, leaving no trace behind.

"We recognize that recovery of large collections of microfliers might be difficult," Rogers said in the statement. "To address this concern, these environmentally resorbable versions dissolve naturally and harmlessly."

It's an elegant approach to monitoring air pollution — and it's only appropriate that the original idea came from nature itself.

More on air pollution: Something Is Frizzling Up the Brains of Old White Guys

Read This Next
Futurism
Saving Moore's Law: Physics Could Let Us Make Chips Faster Without Making Them Smaller
More on Robots & Machines
From the Dept. of...
12:00 AM on futurism
The Best Wireless Mouse of 2023
Balloon Boy
Yesterday on the byte
Other Chinese Balloons Apparently Flew Over America, But Nobody Noticed Them
From the Dept. of...
Yesterday on futurism
The Best Earbuds Under $50 in 2023
READ MORE STORIES ABOUT / Robots & Machines
Keep up.
Subscribe to our daily newsletter to keep in touch with the subjects shaping our future.
+Social+Newsletter
TopicsAbout UsContact Us
Copyright ©, Camden Media Inc All Rights Reserved. See our User Agreement, Privacy Policy and Data Use Policy. The material on this site may not be reproduced, distributed, transmitted, cached or otherwise used, except with prior written permission of Futurism. Articles may contain affiliate links which enable us to share in the revenue of any purchases made.
Fonts by Typekit and Monotype.