That's one hell of a gardening challenge. 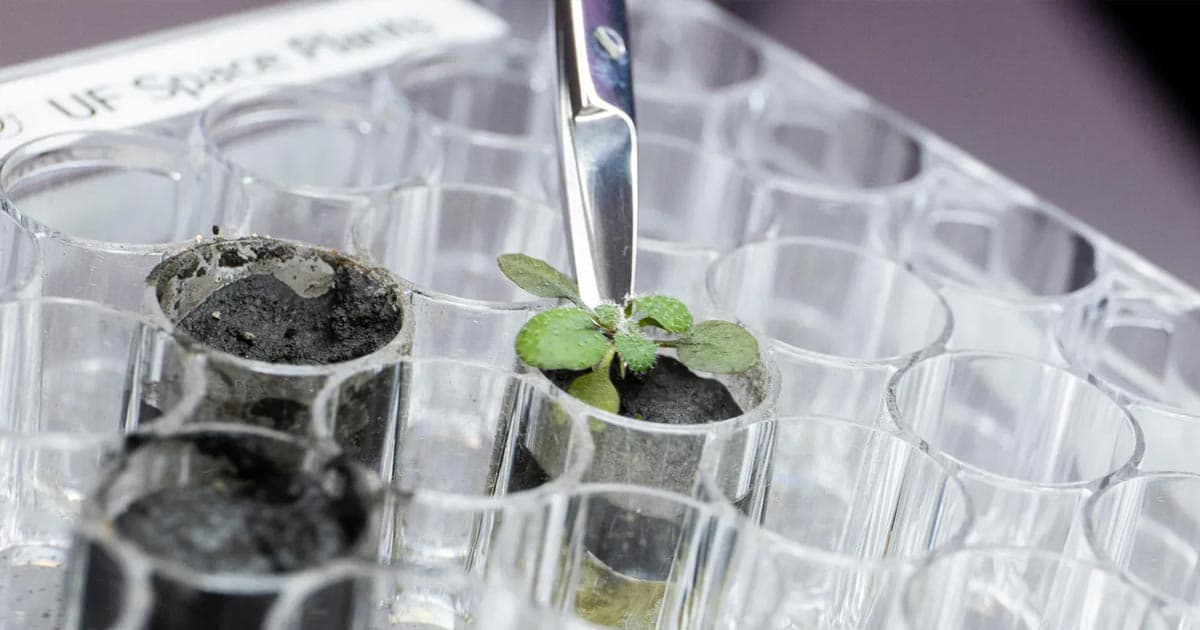 A new skill may soon be in high demand among potential astronauts: gardening.

The team used samples from Apollo 11, 12, and 17, along with a control group of volcanic soil from Earth, which has a similar composition to lunar dirt.

Unsurprisingly, the cress grew best in the Earthly volcanic ash and worse in lunar soil, but it did indeed grow in the alien dirt. Dr. Stephen Elardo, assistant professor of geology at the university, said they included a water-based nutrient solution to stimulate growth, sort of like a Moon-y Miracle Gro.

"It’s all rock-based," Elardo said of lunar soil on a phone call with Futurism this morning. "There’s almost no carbon, no water, no phosphorous, no nitrogen, all the standard things a plant needs."

Soil amendments, like the water-based solution Elardo's team used, are almost certainly going to be involved in any successful lunar gardening project. On Earth, gardeners and agricultural producers alike still need to make sure soil composition matches a plant's needs, which are predominantly nitrogen, carbon, potassium and phosphorus.

Cheap soil tests allow us to identify deficiencies and add specific amendments like compost, blood meal, egg shells or synthetic nutrients. But on the Moon, it's not really clear yet how we properly fertilize plants and make up for the rough, aggressive particles of lunar soil. It's important though, because the gap between wimpy seedling and fully fruited, productive plant is wide.

Elardo said the study is important because not only did the team find that younger lunar soil is more hospitable to plant life, but also because we now know we won't have to take all the gardening resources we need to the Moon. Instead, we just have to figure out how to transport or create the best lunar compost the solar system has ever seen.

"If we ever get to the point of being able to do this on the Moon we’re going to have to bring some materials with us, some organic nutrients, a source of carbon and nitrogen," Elardo said. "The real benefit of our study, and hopefully follow ups, is it shows that we don’t need to bring all the soil with us. We can use the lunar soil that’s already there, add some amendments to it and hopefully be in a position to grow crops."

More on lunar missions: NASA Is Now Running Into Serious Issues With Its Mars Helicopter

Read This Next
Moon Wrestling
The Head of NASA Is Scared Chinese Astronauts Will Seize Portions of the Moon
Next Time
NASA Cancels First Launch Attempt of Uber Expensive Moon Rocket
Back to the Moon
NASA: SpaceX Only Has to Prove It Can Land Astronauts on Moon, Not Bring Them Home Again
Moon Vacation
NASA Finds Holes on the Moon Where It's Always a Comfortable Temperature
So Long
Tragedy! NASA Says the Voyager Space Probes are Powering Down
More on Off World
Stunning Centaur
3:13 PM on the byte
James Webb Spots Asteroid With Its Own Saturn-Like Rings
Grrrrrrrr
Yesterday on the byte
Internet Erupts as NASA Spots Cartoon Bear on Surface of Mars
Gl1tc4
Yesterday on the byte
NASA Says Another James Webb Instrument Has Suffered a Glitch
READ MORE STORIES ABOUT / Off World
Keep up.
Subscribe to our daily newsletter to keep in touch with the subjects shaping our future.
+Social+Newsletter
TopicsAbout UsContact Us
Copyright ©, Camden Media Inc All Rights Reserved. See our User Agreement, Privacy Policy and Data Use Policy. The material on this site may not be reproduced, distributed, transmitted, cached or otherwise used, except with prior written permission of Futurism. Articles may contain affiliate links which enable us to share in the revenue of any purchases made.
Fonts by Typekit and Monotype.