The D
Feb 10 by Victor Tangermann
The D
/Off World

"The discovery shows that our closest stellar neighbor seems to be packed with interesting new worlds, within reach of further study and future exploration." 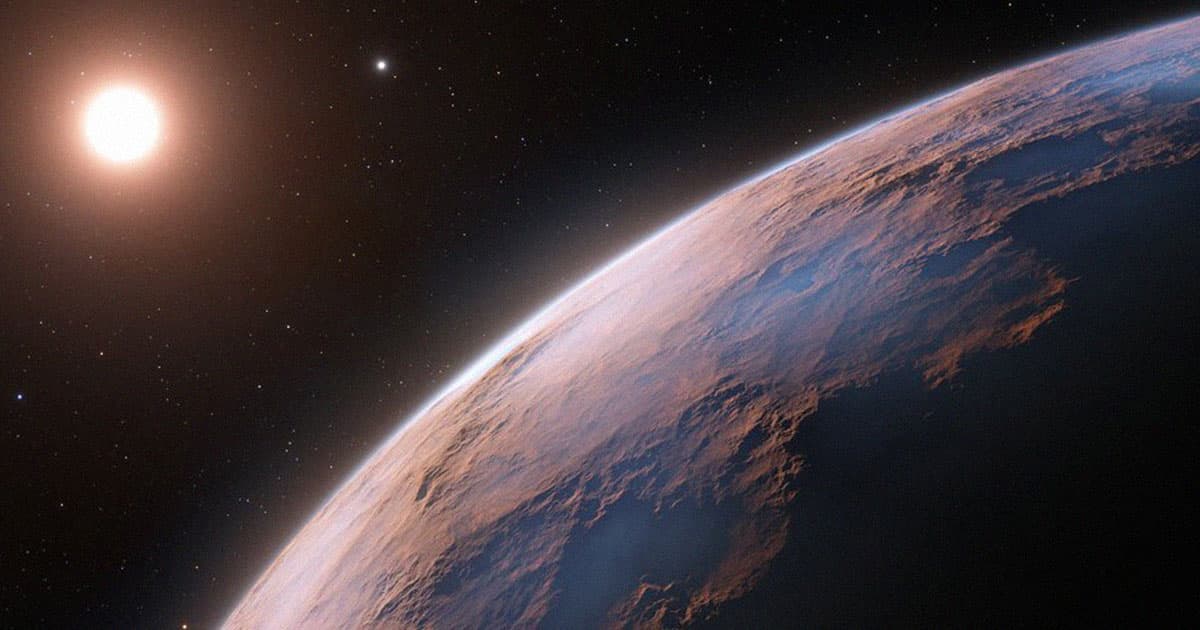 A team of astronomers have discovered evidence for yet another exoplanet orbiting Proxima Centauri, our closest neighboring star just over four light-years away.

The planet, dubbed Proxima d, is the third planet detected in the system. It’s also pretty tiny, at only a quarter of the Earth’s mass, making it one of the lightest exoplanets ever discovered, according to a press release.

“The discovery shows that our closest stellar neighbor seems to be packed with interesting new worlds, within reach of further study and future exploration,” said João Faria, a researcher at the Instituto de Astrofísica e Ciências do Espaço in Portugal and lead author of the study published today in the journal Astronomy & Astrophysics, in the statement.

The tiny planet orbits its star at around 2.48 million miles, less than a tenth of the distance between Mercury and the Sun, completing a full rotation in just five days.

Even more excitingly, its orbit is also within the habitable zone of the Proxima Centauri system, the area where liquid water could exist on its surface.

In other words, Proxima d could theoretically harbor life as we know it.

The team got first glimpses of Proxima d during 2020 observations, but the signal was too weak to confirm its existence, requiring follow up observations with the even more precise Echelle SPectrograph for Rocky Exoplanets and Stable Spectroscopic Observations (ESPRESSO).

“After obtaining new observations, we were able to confirm this signal as a new planet candidate,” Faria explained in the statement. “I was excited by the challenge of detecting such a small signal and, by doing so, discovering an exoplanet so close to Earth.”

The team was able to find evidence for the tiny planet’s existence by using the radial velocity technique, which involves detecting wobbles in the motion of a star caused by an orbiting planet’s gravitational pull.

The ESO’s instrument was accurate enough to pick up Proxima Centauri wobbling a mere 15 inches per second.

Experts are now excited to use the same technique to “unveil a population of light planets, like our own, that are expected to be the most abundant in our galaxy and that can potentially host life as we know it,” as Pedro Figueira, ESPRESSO instrument scientist at ESO, put it in the statement.

Proxima Centauri is tantalizingly close — and we may only see whether it hosts life once we have a look for ourselves.

Read This Next
Search for Life
Former Astronaut Suggests Specific Planet for James Webb to Search for Life
Enhance! Enhance! Enhance!
NASA Telescope Idea Could Spot Vegetation on Distant Exoplanets
Water Worlds
Exoplanet “Water Worlds” Could Hold Unfathomably Deep Alien Oceans
Futurism
SpaceX Just Launched NASA’s Exoplanet-Hunting Telescope (Gee I Wonder What They’ll Find)
Futurism
Now Anyone Can Hunt For Exoplanets
More on Off World
Open Sesame
Yesterday on the byte
It Turns Out That “Door” on Mars Is Hilariously Tiny
At Last
May 21 on the byte
Astronauts Enter Starliner After It Finally Docks To Space Station
Fire Up the Backup
May 20 on the byte
Boeing Starliner Limps Into Orbit After Two Engines Fail
READ MORE STORIES ABOUT / Off World
Keep up.
Subscribe to our daily newsletter to keep in touch with the subjects shaping our future.
+Social+Newsletter
TopicsAbout UsContact Us
Copyright ©, Camden Media Inc All Rights Reserved. See our User Agreement, Privacy Policy and Data Use Policy. The material on this site may not be reproduced, distributed, transmitted, cached or otherwise used, except with prior written permission of Futurism. Fonts by Typekit and Monotype.