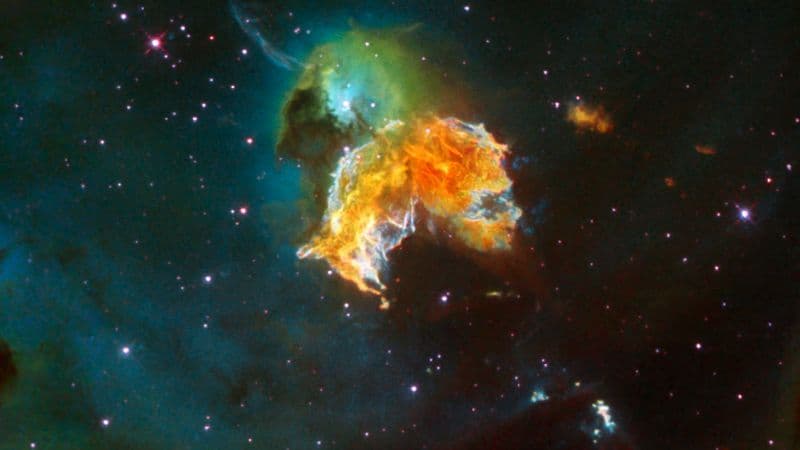 Although life on Earth may seem rather stable and unchanging—the tide goes in and out, the Sun rises and sets, and the months bleed on the same as always—in the grand scheme of things, our universe is actually a rather dynamic place.

Everyday, millions of stars are born and die, and in the end, the same thing will happen to our own Sun.

A few billion years from now, as our star begins to transition into a red giant, temperatures on our world will increase, and life will be extinguished.  Just a few billion years after that, once the Sun exhausts its supply of material to sustain nuclear fusion, it will begin its death throes. When this happens, it will cast off its outer layers and, eventually, fade into darkness.

Nothing in our universe is eternal...or is it?

Atoms are the building blocks of matter. They, quite literally, make our universe what it is. When we die, our bodies do not turn into nothing; rather, they are broken down into their constituent parts and recycled into the ecosystem. In short, our atoms go on long after we are gone.

But just how long can atoms last? Will they eventually be broken down into...nothing?

To answer this question, you need to understand a little bit about how atoms work. As you may know, atoms contain protons and neutrons, and they are surrounded by a "shell" of electrons. The number of electrons that are found in the cloud are equal to the  number of protons. This helps create stability.

Ultimately, the number of protons is what determines the atomic number. For example, helium has two protons, so its atomic number is two (and it appears second on the periodic table of elements). The number of neutrons that are found in an atom are generally consistent, but not always. And if an atom doesn't have the "correct" number of neutrons, sometimes, the atom may lose a neutron (kind of like how you lose a sock in the wash). When this happen, the atom becomes unstable and, in an attempt to become a stable atom, it shoots off subatomic particles. Most often, the atom will shoot off an electron.

This is how atoms breakdown.

Anytime that you have a heavy atom, there is some risk that it will spontaneously start to break down into smaller particles. This is known as "radioactive decay." This is just a very basic breakdown. Please see the link for more on radioactive decay.

To return to the point at hand, unfortunately, this is a stochastic process (which means that it has "a random probability distribution, or pattern that may be analyzed statistically, but may not be predicted precisely"). In other words, we can't pinpoint exactly when a breakdown will occur - when a subatomic particle will be shot off; however, since we can analyze the pattern, we can determine how many atoms will decay over an average time, which is called the"half-life," and it is a very reliable estimate.

Since an atom has a finite number of protons and neutrons, it will generally emit particles until it gets to a point where its half-life is so long, it is effectively stable. For example, Bismuth-209 is believed to have the longest decay rate. It undergoes something known as "alpha decay," and it's half-life is over a billion times longer than the current estimated age of the universe.

So for all intents and purposes, Bismuth-209 is basically eternal.

That said, true eternal life depends on whether or not protons can decay. Some scientists have put forth hypotheses related to this, and it is referred to as "proton decay" (a hypothetical form of radioactive decay). According to one idea, the Georgi–Glashow model, protons transition into a  positron and a neutral pion, which then decays into 2 gamma ray photons. Estimates put the half-life for protons at 1.29×1034 years.

That, if you don't know, is a super long time; however, there is no experimental evidence to confirm proton decay. But research that is being conducted at some of the world's mega laboratories may, with a bit of luck and hard science, reveal something in the future.