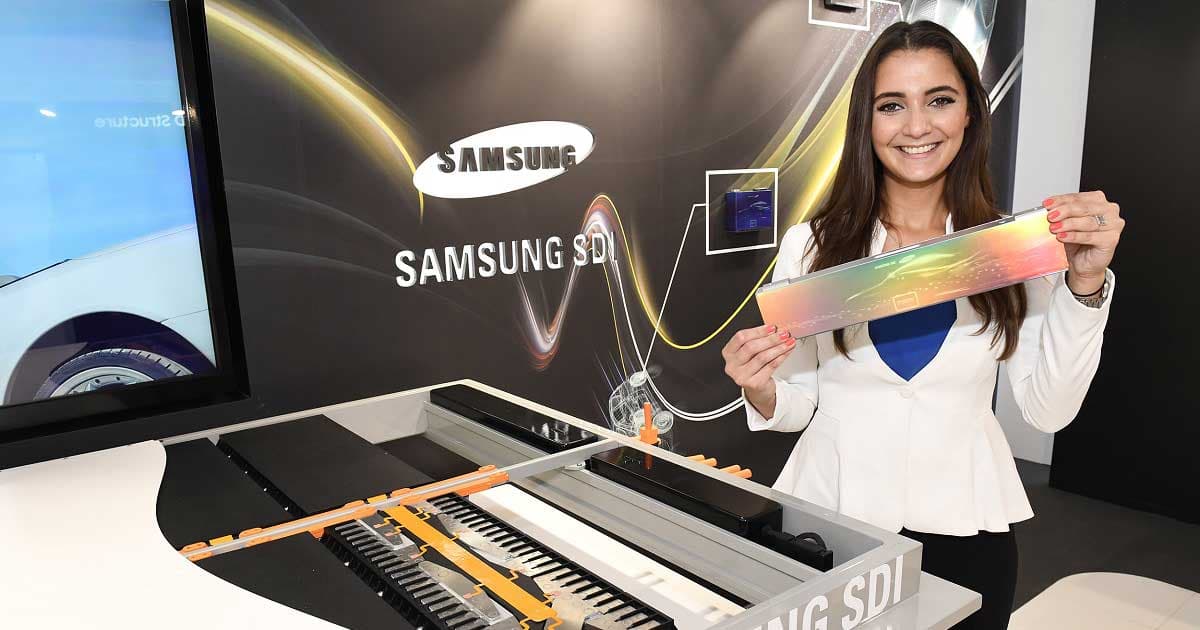 At the Frankfurt Motor Show (IAA Cars 2017) in Germany earlier this week, Samsung SDI — the battery-focused division of Samsung — unveiled a new multi-functional battery pack capable of increasing the current range of electric vehicles. As explained by the Korean company, the battery enables cars to go between 600-700 kilometers (372-435 miles), provided the right number of modules are installed.

"Its users can change the number of modules as they want as if they place books on a shelf," says Samsung. "For example, if 20 modules are installed in a premium car, it can go 600 to 700 kilometers. If 10 to 12 modules are mounted on a regular sedan, it can run up to 300 kilometers. This pack is expected to catch the eyes of automakers, because they can design a car whose mileage may vary depending on how many modules of a single pack are installed."

Electrek explains that automakers like Nissan and GM have been using prismatic cells in their battery packs. Samsung SDI began developing new "2170" cylindrical cells earlier this year, following the footsteps of Tesla, which was the first to do so with their "2170" battery cell.

No other details for the new battery pack were disclosed at the event, but it's still an impressive range compared to what existing electric vehicles are capable of. The Tesla Model S, for example, is expected to have a range of 416 kilometers (259 miles), while the Chevy Bolt has an estimated range of 383 kilometers (238 miles) — a recent test conducted by Consumer Reports says otherwise, however.

Upcoming electric vehicles like the recently revealed 2018 Nissan Leaf are good for 241-257 kilometers (150-160 miles), while the highly-anticipated Tesla Model 3 is said to have a range of 354-498 kilometers (220-310 miles). We'll have to wait and see how well Samsung's battery performs in a realistic environment.

Read This Next
LIDARally
Volvo's New Electric Car Won't Drive if It Detects That You're Drunk
Charged Up
Startup Says Amazing New Battery Lets EVs Drive 400 Miles, Recharge in 15 Minutes
Shots Fired
Ford CEO Mocks Tesla For Rolling Out Half-Finished Autonomous Driving
Poor Comms Team
Volkswagen Says It Lied to Reporters About Name Change
Weather Advisory
It's So Cold, Even Teslas Are Freezing Shut
More on Advanced Transport
Quelle Surprise!
Yesterday on the byte
Of Course Elon Musk Is Pushing The Cybertruck Back Again, What Did You Expect?
Stay Away
Wednesday on the byte
New SUV Features Electrified Door Handles and Pepper Spray Guns
No Fly
Monday on the byte
The TSA's Entire No Fly List Appears to Have Just Leaked
READ MORE STORIES ABOUT / Advanced Transport
Keep up.
Subscribe to our daily newsletter to keep in touch with the subjects shaping our future.
+Social+Newsletter
TopicsAbout UsContact Us
Copyright ©, Camden Media Inc All Rights Reserved. See our User Agreement, Privacy Policy and Data Use Policy. The material on this site may not be reproduced, distributed, transmitted, cached or otherwise used, except with prior written permission of Futurism. Articles may contain affiliate links which enable us to share in the revenue of any purchases made.
Fonts by Typekit and Monotype.