More than half of people can't tell the difference. Can you? 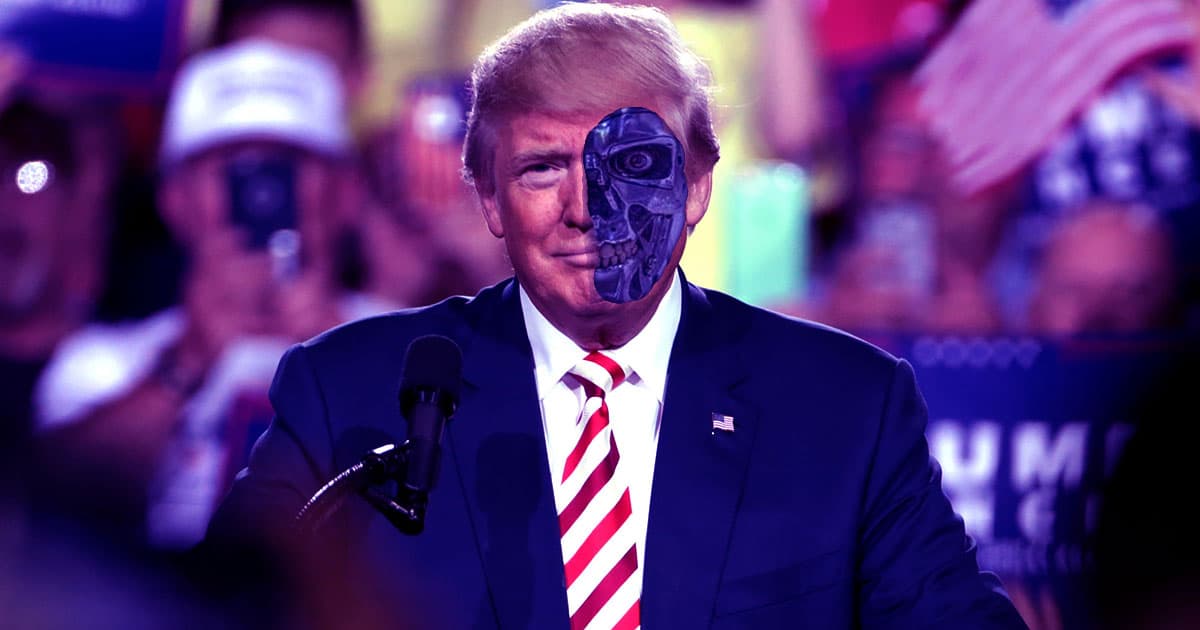 Pop quiz: Which of the following paragraphs was said by U.S. President Donald Trump? No cheating with Google.

Paragraph 1: I am going to win the 2020 election by a landslide, and we are not even there yet. We have just started. And you know what? We’re doing great. But we’re getting there. You know, they say that if Trump doesn’t run, it’s over. It’s over, folks. If he runs, they’re never gonna beat him. They’re never gonna — he’s got such great support. He’s done an incredible job for us. So we’ll see what happens, but I’m telling you, this is one of those things.

Paragraph 2: When the radical Democrats get control, they will try to erase every single thing that we've achieved. Democrats want to raise your taxes. They want to impose socialism. That's what they're doing. They want to take away your Second Amendment. Take away your strong health care that we're making stronger and stronger every single day. By the way, nobody talks about, but we got rid of the individual mandate, the most unpopular aspect of Obamacare.

The correct answer is the second paragraph, but if you got the question wrong, you aren't alone.

In September, Salesforce Research unveiled CTRL, an AI-powered system capable of writing text in the same style as its training data. The team at Lawsuit.org, a blog focused on U.S. law, later decided to feed the AI text generator a diet of Trump speeches.

They then challenged 1,000 people to tell the difference between paragraphs written by their "RoboTrump" model and things the president had actually said or written — and, in a surprise result, they guessed wrong 60 percent of the time.

Conservatives, for example, were more likely to believe the real Trump said something — and not RoboTrump — than respondents who identified as liberal. Younger people were also more likely than older participants to believe a paragraph was written by Trump.

The researchers note that their volunteers may have scored so poorly on the quiz because "Trump's rambling style probably makes differentiating between real and fake more difficult than it would be for a more eloquent and talented speaker." Ouch.

Thankfully, it seems the quiz did serve as something of a wake-up call for participants as to how convincing an AI text generator can be — after finding out their scores, 43 percent said they were "more concerned" about the tech's potential impact on the 2020 election than they were prior to taking the quiz.

READ MORE: RoboTrump — An AI Trump From Your Nightmares [Lawsuit.org]

Read This Next
Truth, Shmuth
Experts Warn of Nightmare Internet Filling With Infinite AI-Generated Propaganda
MSNBS
MSN Deletes Fake News About Mermaids and Bigfoot, Runs New Story About Haunted Ventriloquist Dummy
Paper Chaser
Researcher Tells AI to Write a Paper About Itself, Then Submits It to Academic Journal
Propaganda Machine
This Site Uses AI to Generate Fake News Articles
Bad GROVER!
New AI Generates Horrifyingly Plausible Fake News
More on Artificial Intelligence
AI Asshole
Yesterday on the byte
BuzzFeed Columnist Tells CEO to "Get F*cked" for Move to AI Content
Deepfaked Neighbors
Yesterday on futurism
Trashy TV Prank Show Deepfakes Celebrities Into Jackass-Style Situations
Bad Bots
Yesterday on the byte
Oxford Scientists Warn AI Could Be More Deadly Than Nuclear Weapons
READ MORE STORIES ABOUT / Artificial Intelligence
Keep up.
Subscribe to our daily newsletter to keep in touch with the subjects shaping our future.
+Social+Newsletter
TopicsAbout UsContact Us
Copyright ©, Camden Media Inc All Rights Reserved. See our User Agreement, Privacy Policy and Data Use Policy. The material on this site may not be reproduced, distributed, transmitted, cached or otherwise used, except with prior written permission of Futurism. Articles may contain affiliate links which enable us to share in the revenue of any purchases made.
Fonts by Typekit and Monotype.