This guy is in charge of the US's nuclear arsenal. 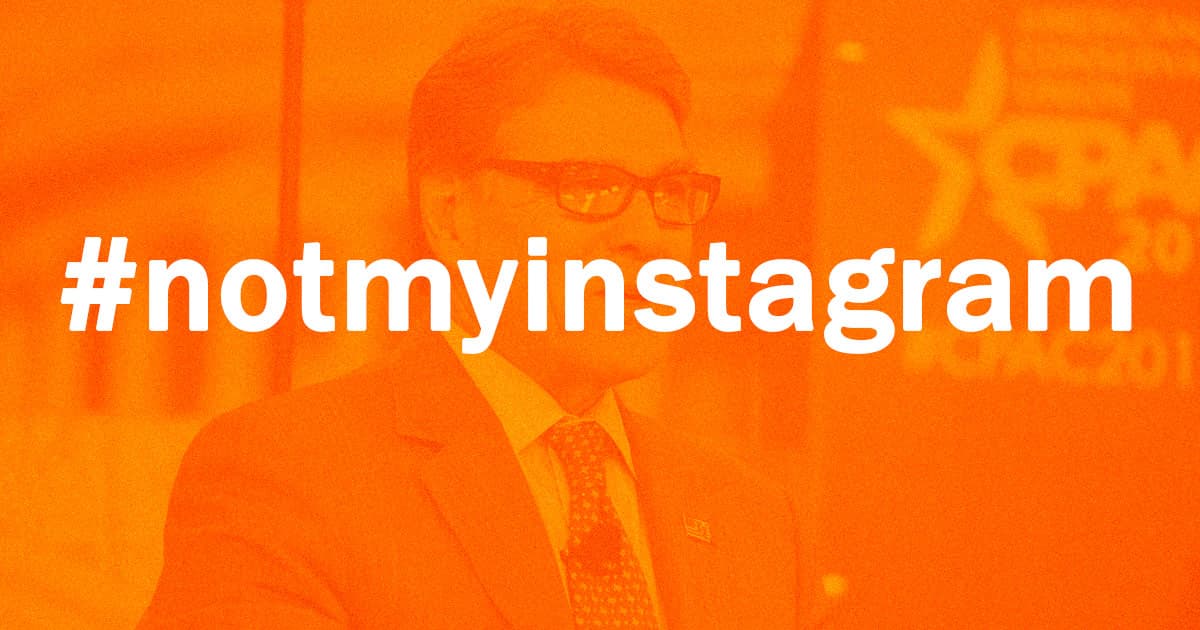 A hoax meme is currently spreading across Instagram — and Rick Perry, the head of the United States Department of Energy, just fell for it.

The image is nothing more than a huge paragraph of text warning users that Instagram is changing its privacy policy "tomorrow," and if they don't repost it, Instagram will have "permission" to use everything they've shared on the platform.

"Feel free to repost!! #nothanksinstagram," Perry wrote alongside the image, which has since been deleted from his Instagram page but still up on his Twitter account at the time of writing.

If we saw the post on our not-so-internet-savvy parents' Instagram feed, we'd probably roll our eyes and scroll on — but the idea that the person responsible for the United States' nuclear arsenal fell for the hoax is downright terrifying.

The post is clearly fake for countless reasons, some of which are obvious — part of the word "now" is missing, for example, and some words are only partially bolded.

Others are a bit less conspicuous, such as the reference to the Rome Statute.

The average person might not know that that's an agreement that established the International Criminal Court, an entity — which, as The Next Web pointed out, the United States isn't even a member of — tasked with investigating such atrocities as genocide and crimes against humanity.

Think they would care about a social network "stealing" photos of your newborn nephew or your barista's stellar latte art?

Oh, and that's the other thing: Instagram doesn't need to "steal" those photos.

Take a look at the platform's Terms of Use, and you'll find that, when you post anything on the site, you "grant to [Instagram] a non-exclusive, royalty-free, transferable, sub-licensable, worldwide license to host, use, distribute, modify, run, copy, publicly perform or display, translate, and create derivative works of your content (consistent with your privacy and application settings)."

So, to recap, Perry not only couldn't tell that something was off about the hoax just by looking at it, he also apparently doesn't know what the Rome Statute is or how social media works in general.

Again, this man is in charge of the U.S.'s nuclear arsenal — and a person with so much power really shouldn't be this easily fooled.

Read This Next
I Silence Thee
Leaked Messages Seem to Show Elon Musk Using Twitter to Punish His Enemies
Heating Up
Employees at TikTok Apparently Have a Secret Button That Can Make Anything Go Viral
Hardcore Mode
Even Twitter's Intern Just Resigned in Disappointment
Confrontation is Hard
Former Facebook Exec Says Zuckerberg Has Surrounded Himself With Sycophants
Uh Oh
Research Confirms TikTok Is a Cesspool of Misinformation
More on Future Society
Bird Crap
Feb 4 on the byte
It Looks Like Elon Musk Is Actually Building a Twitter Payment Platform
Balloon News
Feb 3 on futurism
China Says "Spy Balloon" Soaring Over America Is Completely Innocent
Down in Flames
Feb 1 on the byte
Elon Musk Apparently Thinks Twitter Is a "Flaming Dumpster Rolling Down the Street"
READ MORE STORIES ABOUT / Future Society
Keep up.
Subscribe to our daily newsletter to keep in touch with the subjects shaping our future.
+Social+Newsletter
TopicsAbout UsContact Us
Copyright ©, Camden Media Inc All Rights Reserved. See our User Agreement, Privacy Policy and Data Use Policy. The material on this site may not be reproduced, distributed, transmitted, cached or otherwise used, except with prior written permission of Futurism. Articles may contain affiliate links which enable us to share in the revenue of any purchases made.
Fonts by Typekit and Monotype.