Review: Can the Thermacell E55 Mosquito Repellant Hold a Candle to Citronella? 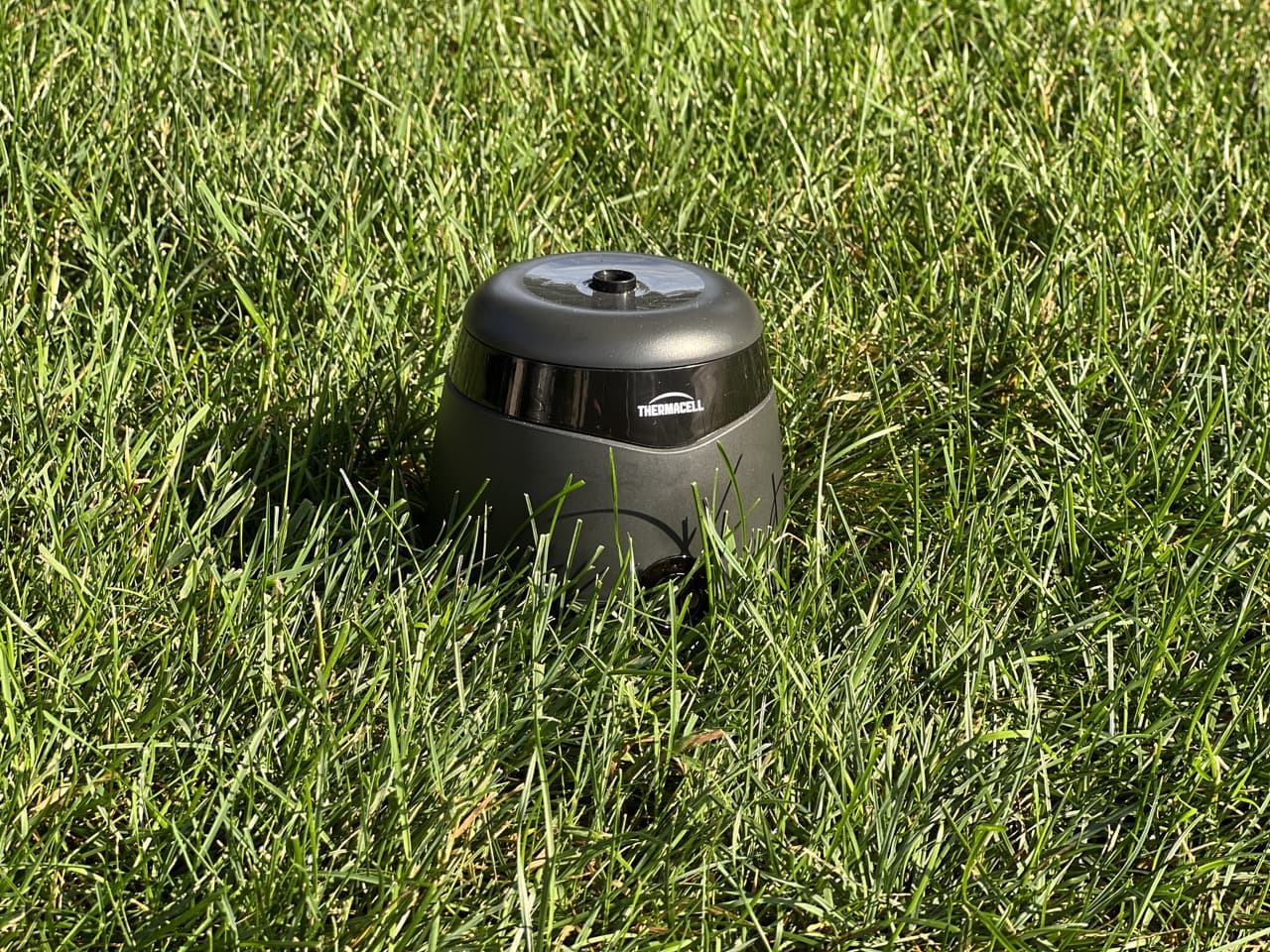 When I first heard about Thermacell's solution to mosquito repellants, it seemed too good to be true. Rather than messing with sprays or the strong scent of Citronella candles, their devices could create a scentless, invisible barrier to keep mosquitos out without interruption. After getting to test out its E55 model, I'm here to say that the company's gear mostly lives up to its claims, though it's not a one-stop-shop to keep every bug from your next cookout. The E55 is the entry-level model in Thermacell's lineup and is designed to keep small gatherings mosquito-free. The device has a squat, oval shape with limited branding, and I was happy that it didn’t scream “I’m a gadget,” since it’s designed to be used in public settings. If it ends up in your pictures, you’ll hardly notice. Here's our Thermacell E55 review.

Unboxing and setting up the device was straightforward, required no tools, and took about five minutes. Blissfully, there’s no app involved — a relative rarity nowadays. All I had to do was take the E55 out of its box, twist its top to reveal a chamber for the device’s liquid cartridge, insert the cartridge, and close it back up. The E55’s battery came partially charged, but I plugged it into a charger using the included USB-C cable to top it up fully.

The cartridge inside the E55 contains Thermacell's "repellant formula," which is derived from compounds called pyrethroids, which are found in certain plants. The company cites chrysanthemums as an example of a pyrethroid-rich organism. The natural ingredient is EPA approved, but the agency has developed recommendations for its use.

Using the E55 was as easy as setting it up. The single button on its frontside chimes when you press it for a couple of seconds, and a grid of LEDs illuminate to show the device's current battery level. Four lit lights means the device is fully charged, one means it’s probably time to find its charging cable. Thermacell says it takes up to 15 minutes for the heating element inside the E55 to get hot enough to begin evaporating the liquid inside its cartridge. The E55 is scentless because the heating element isn't burning anything. Instead, puffs of white, papal-like smoke billows out of the top of the E55 at regular intervals. True to form, the E55 was both silent and scentless every time I turned it on.

As for its effectiveness, the E55 is kind of a mixed bag depending on your expectations. It was able to keep mosquitoes away from an outdoor homemade pizza party on the Connecticut shoreline, complete with a table full of raw toppings. Thermacell says the barrier created by the E55 is a 20-foot circle, and recommends placing it in the center of the place you’re gathering for it to be most effective. There was roughly 20 feet between the pizza oven and the edge of our oven, and nobody complained about mosquitoes for the duration of our multi-hour dinner, so I’m confident in Thermacell’s claims.

That said, other bugs — including larger flies synonymous with summer — could break through the E55's invisible barrier. There were fewer of them than normal, but you shouldn't consider this device to be a pest-control panacea. Thermacell never says the E55 is designed to repel all bugs, but it's easy to see the anti-mosquito picture on its packaging and make that assumption. Other factors, like strong wind, can limit the E55’s effectiveness as the vapor it emits will be carried away. In that situation, bugs of all types will have a tougher time getting to you anyway, so it ends up being a non-issue

The good news is that Thermacell says the E55 is equipped to handle different types of mosquitoes, which can carry diseases as deadly as Zika and West Nile virus. You may have to wave your hand over your food when dining outdoors, but you won't have to worry about contracting a deadly disease without knowing it. I should say that the E55 did a very good job during late-night hangouts where food wasn't present. That's the time when mosquitoes are most annoying, and houseflies aren't as persistent.

I could see the Thermacell E55 being an especially helpful tool to take during camping trips, where they can keep mosquitos at bay while you sleep under the stars. You'll need to time your usage appropriately, though, because the E55 only lasts six hours on a single charge. You can recharge the E55 using the included USB-C cable, and plugging it into either an outlet using a power adapter, or a power bank. The second option is a great choice for campers, boaters, hunters, or anyone who spends time outdoors, as you can extend the life of the E55 as needed.

The cartridge Thermacell includes with the E55 is rated to last 12 hours — or two complete battery cycles. We’re happy Thermacell bundled the E55 with a cartridge, so you can gauge its effectiveness right out of the box. By the end of your trial cartridge, you’ll know whether this device can handle the mosquito situation in your area. If you like how the E55 works, the company offers a cartridge that lasts 36 hours for $17.99. A three-pack of refills that last 40 hours a piece goes for $54.99. The E55 costs $39.99 on its own, so if you intend to rely on it regularly you should budget about $100 all-in. You could get a lot of bug spray and Citronella candles for that cost, but I still find the Thermacell E55 compelling based on the results of my tests.

Its ease of use and effectiveness were both top-notch, even if the other bug repellant solutions are less expensive and work on more than just mosquitos. If you're a fan of natural-based solutions to annoyances, and are specifically looking to get rid of mosquitos, the E55 is worth a try. Thermacell also offers a much more powerful smart mosquito repellant system called Liv, which lasts longer, covers a larger area, and can be controlled and monitored using an app on your phone. The highest-end version of this system costs $900, which is a major investment for homeowners.