Review: The "Out of This World Cook Book" Chronicles the Early Meals of the Space Age

Explore recipes that were beloved by the families of the Space Coast 50 years ago. 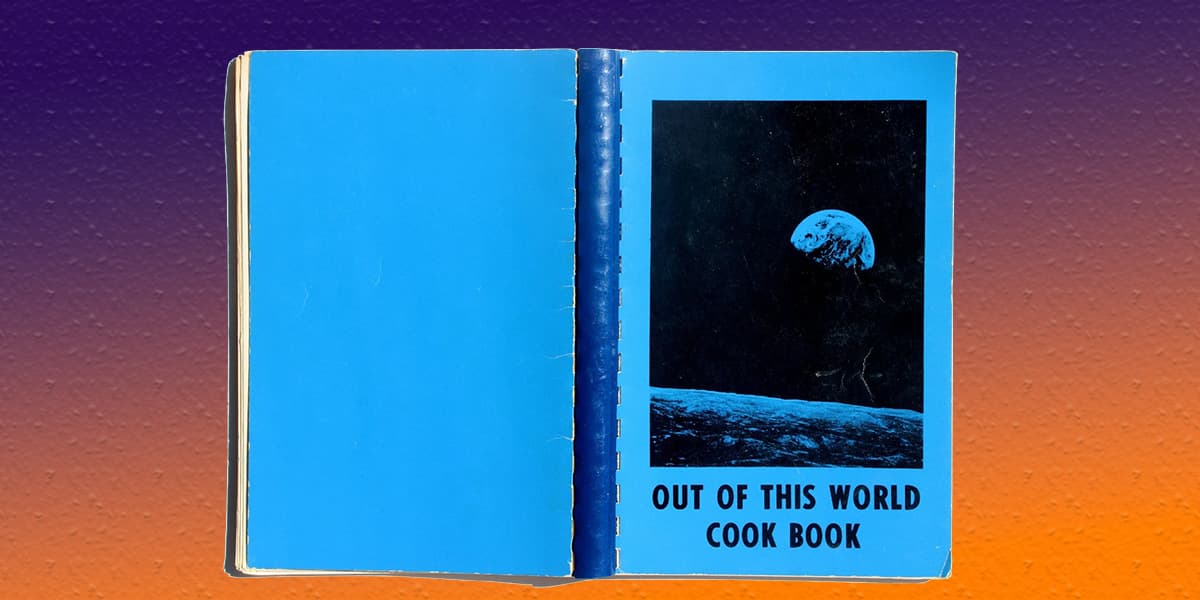 The Space Age launched a quaint, coastal Florida town into cosmic fame when it became the site for the space program, and the wives of the engineers, scientists, and future astronauts were thrown into the deep end. Their primary concerns would soon expand beyond what was for dinner and would help capture the history of the groundbreaking era.

The “Out of This World Cook Book” transports you back in time to when the wives of Cocoa Beach entertained visitors with hors d'oeuvres, casseroles, and Jello salads, while they worried over their husbands orbiting in space. This homespun cookbook is composed of recipes that are reminiscent of your mother’s or grandmother’s cooking, with passages that detail the history of the Cocoa Beach Space Station and those who kept it thriving.

The first American suborbital flight, the Freedom 7, launched in 1961. It drew a large crowd of spectators to the Florida beach where they had a great vantage point. The next year, the Cocoa Beach Pier was built, and locals got to witness more launches.

These first few space launches begged the important question: As the astronauts spent more and more time in orbit, what would they eat up there? Mary Leeds, a contributor to the cookbook, noted that, “A roast beef sandwich wouldn’t suffice, although one astronaut did smuggle one aboard.” The experts at NASA spent a lot of time and money finding new ways to store, heat, and enjoy meals in space; meanwhile, the wives of the crew kept the home fires burning as they struggled with their husbands’ odd schedules, and catered to guests who were excited to visit the new Space Age landmark (as was expected of them, it was the 60s, after all).

In 1969, Apollo 11 launched from Cape Kennedy (now known as the Kennedy Space Center Center at Cape Canaveral) and the Space Coast was the prime spot for watching this historical moment. Cocoa Beach is about 14 miles from the space center and visitors flocked to the area by the thousands and VIPs from around the globe came to congratulate the families. The wives had to kick it up a notch. They went from cooking simple, easy dinners to preparing gourmet feasts for cocktail parties that would host foreign diplomats, celebrities, and old friends.

The “Out of This World Cook Book”

Published in 1973, the "Out of This World Cook Book" was compiled by the Cocoa Beach Women’s Club as a fundraiser for the Space Coast Community Center of Cocoa Beach. When it was published, each copy was sold for $6, plus a dollar for mailing, translating to roughly $40 in today’s money. The Women’s Club wanted the book to serve as a souvenir of the space program, Cape Kennedy, and the Space Coast, and while this was achieved, it also functions as a timestamp for what life was like 50 years ago.

While the vintage cookbook may not look up to snuff compared to the beautifully published ones on your shelf, it’s full of heart and history. The cover image was contributed by NASA, and the illustrations by artists Muriel Hallett and Dorothy Taylor bring depth to the many pages of text.

The cookbook also features the verse of Alice Dishman, who contributed gems like:

"It was the Astronauts who told me
The moon is not made of green cheese
So pass me some Swiss, Edam, or Brie
From our good planet Earth, if you please.”

She also solicited recipes, asking Ron Evans, an astronaut on Apollo 17, what he would like to eat when he returned to Earth.

He replied: “Dear Alice, Sorry, but I don’t cook — However, some good old steak and eggs would taste delicious. Best wishes, Ron Evans.”

Dotty Duke, meanwhile, contributed a recipe that was a favorite of Astronaut Charles Duke. "I am sending you a recipe for a delicious grits casserole — since grits was (sic) first carried to the moon by Charlie. Being a South Carolinean, he is very fond of grits and asked the NASA dietitians to prepare it for him for Apollo 16."

You’ll be spoiled for choice with over 380 recipes to pick from. The dishes within this book are broken down into quirky categories like “Sips, Nips and Dips for V.I.P.s,” “Satellite Salads,” “Manna from Heaven,” and “‘Missile’-laneous.” Because so many of the families involved in the space program were from around the world, there’s a fantastic assortment of recipes from England, Germany, Mexico, Hungary, and other parts of America, like Hawaii. Each entry begins with who provided the dish and how they were related to the space station, then lists ingredients and the steps for making the recipes.

There’s an element of familiarity in the descriptions, as the instructions are fairly informal, as if told to you from memory. They may not all be comprehensive but there’s certainly some winners in the mix, like teriyaki steak, Mexican cornbread, apricot brandy, and dump cake. Although you might not try all of the recipes (unless you’re a big fan of roast pheasant or sauteed liver), just flipping through the pages is entertaining, and you can get a real sense of what Joan Aldrin’s kitchen looked like on a Wednesday night. Ever wondered what President Nixon was having for dessert? Mrs. Nixon’s avocado salad might be worth a try, although avocado mashed with lemon gelatin doesn’t seem to be for the faint of heart.

It certainly wasn’t the easiest life as a housewife back then, let alone for these unsung heroines who certainly did more than they received credit for. As they supported their husbands through one of the most innovative times in American history, they cared for the children, fueled the growth of their once small town, and always made sure to have a delicious dinner on the table.

The “Out of This World Cook Book” is a delight to read, and even more fun to put into practice. Whether you want to bring something new to the table, looking for a space-themed gift (or a culinary one), or are interested in what it was like to eat like an astronaut during the dawn of the exploration of space, you can’t go wrong picking up a copy. It’s not an easy one to find, but copies have been floating around the internet for some time. Amazon, eBay, Etsy, and vintage bookstores have limited copies as well. So when you see one, nab it quickly.