Review: NIU KQi3 Pro Scooter is the Future of Transportation 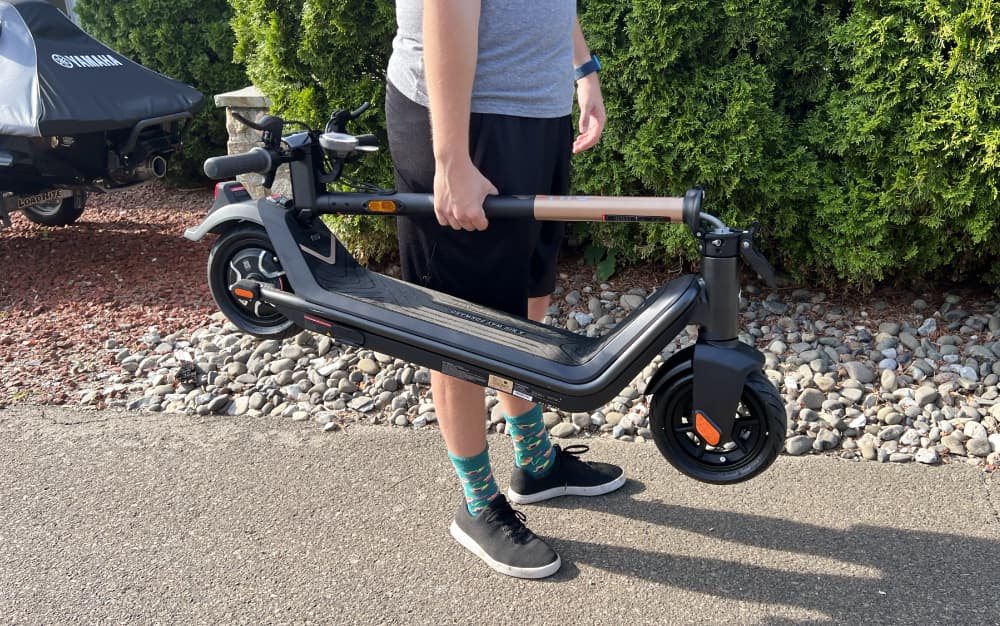 On a dark desert highway, dim Connecticut side street, cool wind in my hair over my helmet; Warm smell of colitas the shoreline, rising up through the air…

I may have been on the other side of America, but The Eagles’ timeless take on California living drifted through my mind throughout my experience with NIU’s KQi3 Pro scooter, a gadget that toes the line between wish fulfillment and the future of short-range transportation. As a 6'2" man, zipping through a beach town on an electric scooter was undeniably fun and attention-getting. But is the KQi3 Pro the future of transportation? Read my full review below.

What is the NIU KQi3 Pro Scooter?

Any ‘90s kid will feel instantly familiar with the KQi3 Pro, which looks like a tricked-out Razor scooter once it's fully assembled. The KQi3 Pro was the first electric scooter I’ve tested, though it feels like I’m late to the party. Electric scooters have become extremely popular in both urban and suburban locales. Even colleges have begun adopting scooters as a means of getting groggy students from one side of campus to the other without getting worn down. The popularity of electric scooters is due, in part at least, to the rising cost of gas and cars both new and used. Why should you circle parking lots or pay for space in a garage when you can zip from place to place?

I was pleasantly surprised with how efficiently this scooter was packed. The box, which measured about five feet tall, was light enough for one person to move around. The KQi3 was packaged compactly enough that I was able to open its box on my kitchen floor (no small feat considering I live in New York City), though this fits in with the eco-friendly nature of an electric scooter.

I was similarly pleased by how easy it was to set the KQi3 Pro up. NIU includes a set of printed instructions with the KQi3, which spell out each step of the installation process with clean images and easy-to-understand language. If you’ve never set up a scooter (like me), you won’t have any issues.  The entire procedure boiled down to sticking the top piece (containing the handlebars and steering column) into the bottom part (which houses the battery, other electronics, platform, and wheels). It's possible to assemble the KQi3 Pro alone, but asking a second person for help simplifies the process. Once the two pieces are connected, you attach them permanently by using a few screws provided in the box.

Setting up the KQi3 Pro's software was similarly simple. NIU's app walks you through the process of pairing your scooter with your phone over Bluetooth. Once the two are synced up, you can view information like your longest ride and the scooter's battery percentage on your phone. The latter is also represented on the KQi3 Pro's screen, but more on that a little later.

The NIU's most important features are its ability to lock your scooter (helpful when you leave it locked up in a public place), and downloading firmware updates. NIU constantly updated the KQi3 Pro's software over the course of my time with the scooter, which I appreciate greatly. This is a device I trust with my life (literally), so any tweaks to how it works are fine by me. It took about a half hour to assemble the KQi3 Pro, download the app, create an account, and finally get ready to ride. If I had to set one up a second time, that figure would probably be cut in half.

My first ride revealed my favorite feature of the KQi3 Pro: It requires you to be moving at a rate of 4kmh (2.4 mph) before you can engage its electric motor. This cuts down on the possibility of accidentally engaging it while moving the scooter around as you get ready to ride. A single push is enough to break through that low threshold, so you can start riding the scooter almost immediately. The chances of accidents are further reduced by the fact that you have to turn the scooter on before using it. This is accomplished by pushing the large power button on a small console built into the middle of the handlebars. It's the only button you'll see, so it's impossible to miss. Pressing it for a couple of seconds elicits a pleasant chime, and the screen immediately pops on.

The KQi3 Pro's display shows your current speed and a basic battery gauge that shows between one and five squares. I'd have preferred to get an actual battery percentage on the screen, but understand that NIU chose this system to avoid having multiple numbers on the screen at once. The display was easy to glance at briefly during rides, but never distracting. Mission accomplished.

While I live in New York City, I don’t feel comfortable using any form of transportation besides walking, driving, and taking the subway, so my test rides were exclusively conducted in Connecticut. This has nothing to do with the safety features of the NIU KQi3 Pro — or any other electric scooter, for that matter — but rather my incredulity at the citizenry of the city that never sleeps. Electric scooters are commonplace here, and the KQi3’s safety features would make it a great choice for riding in an urban environment, but where you ride comes down to your personal comfort level.

So, how does it feel to actually ride on the NIU KQi3 Pro? Incredible. The scooter is so fun to use that you'll almost forget you're using a form of transportation instead of a toy, but you'll need to resist that urge. After a quick, care-free ride down the block, I began my testing in earnest on roads full of beach-bound cars and people of all ages. I took my first rides just after dawn to get my sea (scooter) legs, and highly recommend riding around desolate areas while familiarizing yourself with the scooter. In my case, the KQi3 Pro's accelerator took some getting used to. There's a fine line between a smooth ride, and herky-jerky one full of mini stops and starts. You control the KQi3 Pro's motor by pushing an accelerator located below the right handlebar with your thumb, and finding the right amount of pressure took about an hour. It's not that the KQi3 Pro is hard to use, it's that everybody's hand strength is a little different, and it's easy to try punching it on your first couple of rides only to find yourself accelerating at a rapid pace.

It's worth noting that I never felt unsafe on the KQi3 Pro, even when I was going at full speed 30kmh (18.6 mph). That's due in large part to the effectiveness of the KQi3 Pro's handbrakes, located above the right and left handlebars. Again, it'll take a few rides to know how hard you have to squeeze to come to a full stop at different speeds, but the learning curve of trying a new electric vehicle. My biggest issue was with learning how to successfully make turns, which had nothing to do with the scooter, and everything to do with negotiating the physics of moving my tall frame in the appropriate directions. Knowing how hard to lean into a turn, and how much to twist the handlebar took about a day. I quickly learned to trust the KQi3 Pro, and took to the streets for multi-mile rides.

Riding an electric scooter is incredibly fun, but it's important to remember you need to respect the rules of the road. That means wearing a helmet, stopping at stop signs, clearly telegraphing your turns before you make them, and respecting the flow of traffic. Taking all of these things into account does take some of the fun out of riding an electric scooter, and I had to make several decisions about how to get around obstacles — be they potholes or people — as they came into my view. The KQi3 Pro's relatively slow speed means car drivers may make moves around you, and the scooter's lack of side mirrors means keeping your ears open if someone tries to overtake you. I never found myself in dangerous situations, but you should be mindful of where you plan on riding this scooter and make note of potential nuisances accordingly.

One of the KQi3’s underrated safety features is its large wheels, which allowed me to drive over cracks in the road, small potholes, and a garden hose without causing the scooter to feel unstable. You should avoid large, deep potholes, which the scooter’s wheels could fall fully into, but the same is true when you’re riding a car. If you’re living in a place with bumpy roads — gravel, unpaved streets, dirt — the KQi3 is up to the task. In my limited experience driving “off road,” I never encountered any problems.

That’s important because you need to trust that the scooter you’re riding isn’t going to betray you the moment you move from one type of terrain to another. I mentioned earlier that I felt uncomfortable riding the KQi3 Pro in New York City — but I need to reiterate again that my feelings had nothing to do with the scooter.

As a mode of transportation for short-distance errands, the KQi3 Pro was hard to beat. Traveling three miles (my longest ride) took about 11 minutes. I never tried to artificially cut down my times by going as quickly as possible, and always balanced speed and safety. I learned how much to accelerate when going up hills, and how hard to squeeze the brake when going downhill. By the end of my tests, there wasn't a tight turn I couldn't handle. If you're thinking about getting a KQi3 Pro for quickly running errands around town, its mix of speed, ease of use, and portability makes it preferable to riding e-bike, bicycle, and walking. As a purely recreational tool, the scooter gets full marks for the same reason. I found myself asking "can I take the KQi3 Pro?" every time I wanted to spend time outdoors. I typically mixed it in with walks to get my steps in, but the scooter could easily become your primary form of transportation if you live in a suburban area.

One aspect of riding an electric scooter I hadn't considered before my time with the KQi3 Pro is the reaction from other people. Older folks who saw me riding gave me quizzical looks. Some middle-aged people seemed interested in what I was doing, while others were apathetic. Teenage girls laughed at me the way they would at a dad who pulled an iPhone with a home button out of his pants in front of their friends (the horror)! You have to accept that you'll become a point of interest to other people while riding an electric scooter because they're currently considered a novelty by the general population. The attention could also have been the optics of a tall man in shorts, high socks, helmet, and sunglasses whizzing by. Your mileage may vary here, but be prepared for some kind of reaction.