Review: The GrandPad Tablet is Designed to Keep Seniors Connected

A super-simple tablet that can help you stay in touch. 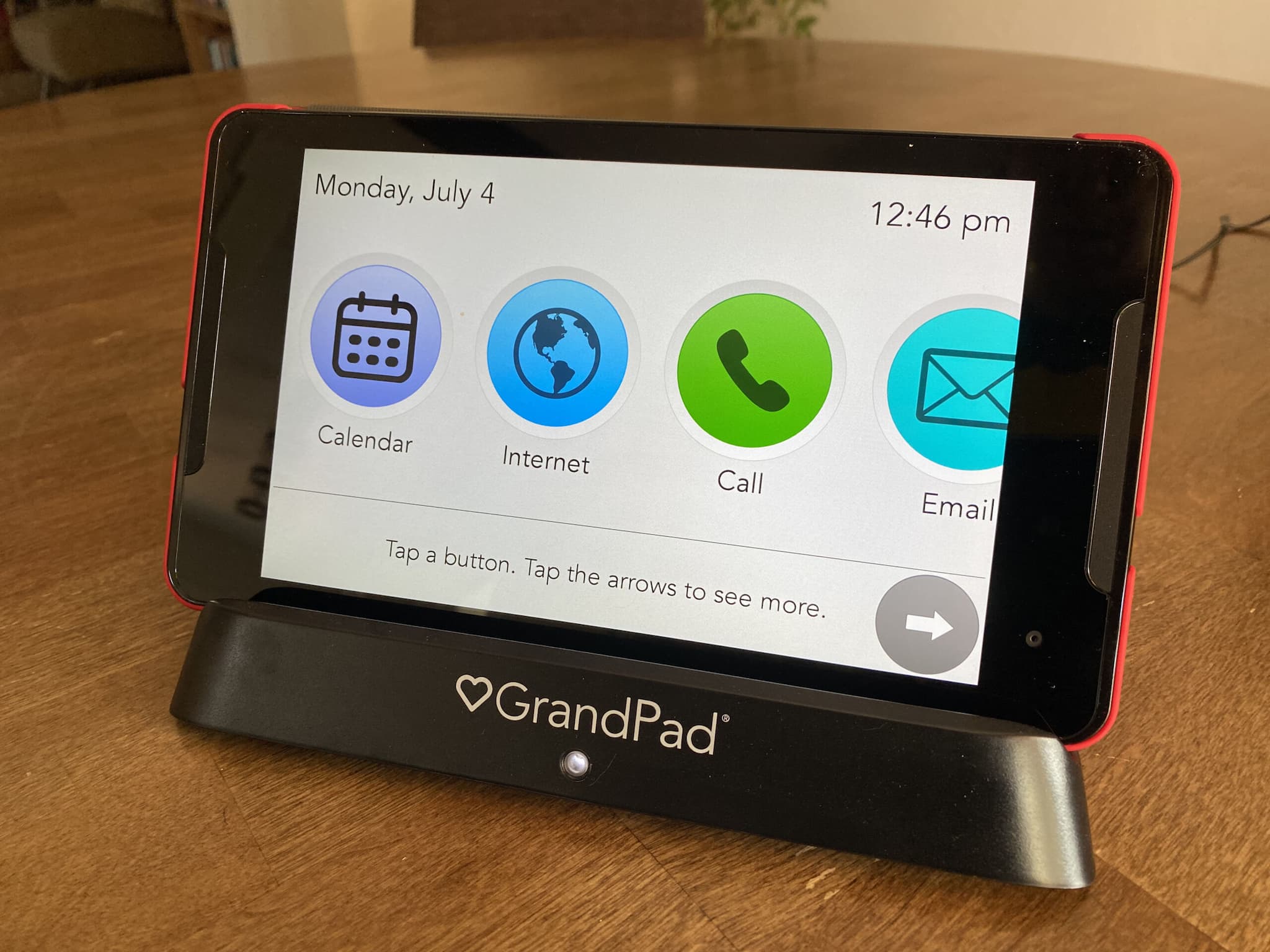 The idea that your grandparents can’t adapt to new technology is as old as a flip phone. According to Pew Research, the number of people 65 and older who are now using technology like smartphones, email, and social media has only grown over the past 10 years. But while there are plenty of grandmas racking up the followers on TikTok, even before the pandemic, isolation was a serious concern for less tech-savvy older adults and residents of nursing homes.

A new tablet called GrandPad is designed to keep seniors connected and entertained the same way most of us stay in touch: through technology. Even if the user has never sent an email in their life, the tablet’s dead-simple interface and endlessly helpful support open the tablet up to just about everyone. We got a hold of a GrandPad, pushed its buttons, and chatted with their support to see just how helpful a tablet built for seniors can be.

Before you or anyone you know gets a GrandPad in their hands, there’s a little prep to do. Currently, the GrandPad is subscription-based, priced at $65 a month for the annual plan. That includes the tablet and accessories, cell service for the device, and 24/7 support at the push of a button.

The “admin,” typically the adult kid or other person supporting the senior, will get a welcome email with an invitation to GrandPad Central, a website where they can set the tablet up with photos and contacts, add approved websites, and more.

This part is important. The more effort you put into this step, the more your senior is going to get out of the tablet. For instance, the tablet can only receive calls from and send emails to people who are listed in the contacts. And while there are pre-loaded nature landscapes in the photo app, the user will obviously have a lot more fun looking at the grandkid pictures you upload.

The tablet itself is designed to ship directly to the senior user and the unboxing couldn’t be simpler. (A fail-proof note at the bottom of the box even says “Oops, I’m upside down. Please turn me over.”). Inside, there’s a dock and a fully charged tablet already connected to cell service — no WiFi setup required. All the user has to do is flip open the protective cover and the tablet gets going.

The home page scrolls sideways, displaying big buttons for functions like internet, calling, email, photos, weather, games, and music. With about 15 buttons in all, there’s enough to “do” without being overwhelming. Tapping on any button brings you to a new function’s homepage and each one has the same simplified ease of use. There’s a big “quit” button at the bottom of each page, so getting back to the home screen is never a mystery.

I had my mother try out the GrandPad, and while she’s not in the target age group of 75-plus, she’ll be the first to admit she’s very tech-unsavvy. With zero instructions, she was able to test out and use every function available, including making a video call and voice call to people I’d added to the contact list. (Her final verdict: “Can I keep this?”)

Of all the available apps, the most impressive is probably the one all the way at the end of the scroll: the help button. A big red question mark leads to a screen with a picture of the rep assigned to the account, along with a bright green call button and a message encouraging users to call with “any questions or just to chat.”

I had three or four lengthy conversations with the rep for my account, Debbie. Before I got the tablet, she walked me through the setup at GrandPad Central. After the tablet arrived, she was able to screen-share and guide me through using all the various apps on the GrandPad. Those two calls — with the admin beforehand and the user upon receipt — come standard with every GrandPad account to get things started. Reps also call a couple weeks after the GrandPad arrives to check in. From there, the support just keeps coming.

If a user taps the help button after hours, they’ll likely reach reps in Ireland who take the night shifts. Debbie told me about one user who likes to call after the Irish team is on the clock because she likes hearing their accents. Another user was calling Debbie regularly just to chat, so Debbie helped her learn Sudoku on the tablet to give their conversations some focus.

Despite being so simple, anyone dealing with memory or cognition issues might still get lost using the GrandPad, which is why the help button directly connects to a live person with the time and patience to walk them through it. Knowing there’s always someone the senior can talk to, especially when family isn't available, will likely come as a major source of comfort for anyone with a loved one in assisted living or a nursing home.

Staying in Touch Made Simple

Beyond the reliable support, the GrandPad simplifies staying connected with family — for both the user and their loved ones. When the admin adds a contact to the user’s account on GrandPad Central, the contact is invited to download the GrandPad companion app (iOS or Android), which allows them to upload photos, view the photo album, and participate in video chats.

As mentioned, only contacts can call into the Grandpad, but if the user needs to make a call outside of the contact list (say to a doctor’s office or the like), a dial pad allows for that. Incoming calls play a musical ringtone and display the pic of who’s calling (provided a profile pic was added by the admin or contact).

An optional phone number comes with the tablet that family members can use for voice calls using any landline or mobile. To make or receive video calls, contacts must use the GrandPad companion app. On the user’s end, initiating either a voice or video call to contacts takes three clearly labeled steps.

One function I’d like to see is a dedicated text app. The Email app functions a bit like texting, allowing contacts to send messages to the user from their GrandPad companion app (which arrive as emails on the GrandPad). A company rep told me texting wasn't included because typing can be challenging for those experiencing tremors or vision loss. Still, it could be a nice addition for users who wanted that option.

One feature I found particularly nice was the Moods app. Like ad-free YouTube sleep videos, each “mood” is a different looped nature scene with calming ambient audio (the one with cricket sounds over a moonlit lake was particularly nice).

Entertainment comes in a few different forms with an app for games (solitaire, spider solitaire, freecell, sudoku, crosswords, and about a dozen more), two apps for music, and an Articles app, which offers regularly updated, condensed stories on everything from art to history to news to travel snippets. The camera takes great photos and even doubles as a “magnifying glass” when accessed through the Toolbox app.

When left on the dock with the cover open, the GrandPad goes into picture-frame mode after a few minutes, displaying a slideshow of the photos uploaded to the Photos app interspersed with weather and time/date panels.

While you don’t have the ability to add standalone apps like Facebook or Instagram, the admin can add the websites of those platforms through the Internet Management tab in GrandPad Central. A handful of internet sites are pre-loaded, and adding more is a straightforward process.

The user can navigate within a given website easily enough, but if they try following an ad or a link leading outside the approved site, they get a friendly “Sorry!” message explaining the content can’t be viewed on the GrandPad. Downloads are likewise disabled, so there’s no chance of accidental virus infection.

The internet safety features highlight a prime directive for GrandPad — keeping senior users safe. No one can call in who’s not on the contact list — so no dice for robocalls and scammers. Approved websites render users immune to the schemes and relentless marketing ploys that call the internet home.

An easy interface streamlines every move, with nothing ironic or precious, just good old-fashioned user-friendliness. Since they know they can’t “mess anything up” even seniors who have trouble with or are intimidated by technology can feel free to experiment, tap buttons, make calls, and try anything else they want.

Final Thoughts on the GrandPad Tablet for Seniors

When seniors enter care or assisted living, many will feel a sense of agency removed from them. Using the GrandPad can give some of that agency back, allowing seniors to stay connected with their friends and family on their own terms — without relying on staff or other caretakers. The instant and infinitely supportive help provided by the GrandPad reps can take some of the strain off already over-busy adult children. That alone is worth the price.