Research Indicates That Most Habitable Planets Might Be "Water Worlds"

Earth's land/water balance might be a rarity in the Universe. 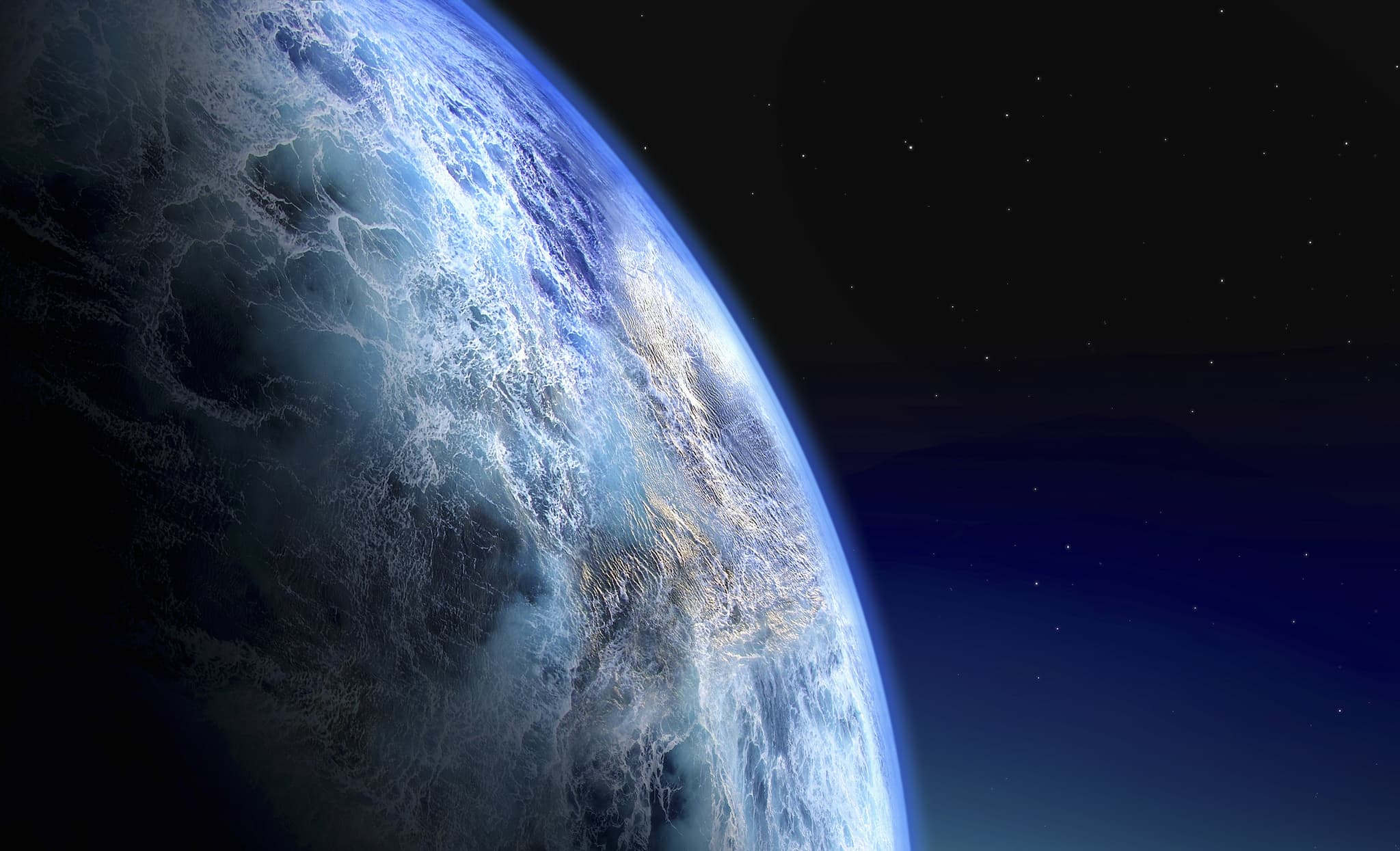 The 1995 movie Waterworld is a cinematic masterpiece of schlock dealing with a post-ice caps world that's nearly completely submerged. The film is exceedingly silly, especially since the premise has absolutely no scientific basis in reality. The complete melting of the ice caps would transform the coastlines of the world, but not to the extent depicted. However, the possibility of habitable planets existing with little to no exposed land is much greater than you may think.

In a study published in the Monthly Notices of the Royal Astronomical Society, researcher Fergus Simpson, of the University of Barcelona, lays out his findings that any planets found with significant levels of water will most likely be totally, or at least mostly, submerged. The data was collected from running computer simulations that took into account various factors that contribute to water distribution on planets, like erosion.

The universe is incomprehensibly vast and some estimations, like the one made by Berkeley's Peter Behroozi, say that the odds of there being other life-sustaining planets are pretty good. Behroozi said that for every grain of sand on our planet, there could be ten planets similar to Earth in the universe. Of those planets, Simpson found that most of those planets would have less than ten percent of their land exposed above water.

Even more, the simulations showed that Earth's ideal mixture of land and sea is an exceedingly rare sweet-spot. The size of a planet plays a role in its potential for water, and larger habitable planets allow for increased water coverage, while smaller planets would all look more like Tatooine with vast, dry deserts.

However, while powerful computer simulations do utilize hard data to make their predictions, the results are far from guaranteed. Experts advise caution in taking these findings at face value. In a conversation with Gizmodo, astrophysicist Sean Raymond says that Simpson's paper puzzles him. He goes on to explain that predicting how much water might be on a planet is impossible since we can't account for how much water is delivered to a given planet. “In the ‘classical model’ of terrestrial planet formation, water delivery to Earth is very [random] so it’s reasonable to imagine alternate Earths with over ten times more water,” he says. “However, in our newer models much less water is delivered but the delivery is more reliable.”

Even so, Simpson has stated that his theory will soon be testable. Advanced technology like the upcoming James Webb Space Telescope will allow us to see deeper into space with greater clarity. The tool could also be used to garner more exact measurements of water on exoplanets.

The presence of water on other planets is an important jumping off point for scientists but by no means does it guarantee the presence of extraterrestrial life. Further study will help us to narrow down potential places to look.

Read This Next
Name Game
NASA May Still Rename James Webb Telescope Over Homophobia Controversy
Search for Life
Former Astronaut Suggests Specific Planet for James Webb to Search for Life
Far Out
Proposed Mission Would Explore Interstellar Object ‘Oumuamua
History Repeating
Astrobiologist: Humans Are Going to Ruin Outer Space
On The Event Horizon
Here's Why Everyone's so Excited About the Black Hole Image
More on Off World
Hall Effect
Yesterday on futurism
Test Suggests Ion Thrusters Could Power Crewed Interplanetary Missions
CHON: Legacy
Yesterday on the byte
James Webb Discovers Coldest Ice in Known Universe, Harboring Molecules Essential For Life
Is There?
Yesterday on the byte
NASA Setting Up Facility For Mars Rock Samples That Might Contain Alien Life
READ MORE STORIES ABOUT / Off World
Keep up.
Subscribe to our daily newsletter to keep in touch with the subjects shaping our future.
+Social+Newsletter
TopicsAbout UsContact Us
Copyright ©, Camden Media Inc All Rights Reserved. See our User Agreement, Privacy Policy and Data Use Policy. The material on this site may not be reproduced, distributed, transmitted, cached or otherwise used, except with prior written permission of Futurism. Articles may contain affiliate links which enable us to share in the revenue of any purchases made.
Fonts by Typekit and Monotype.