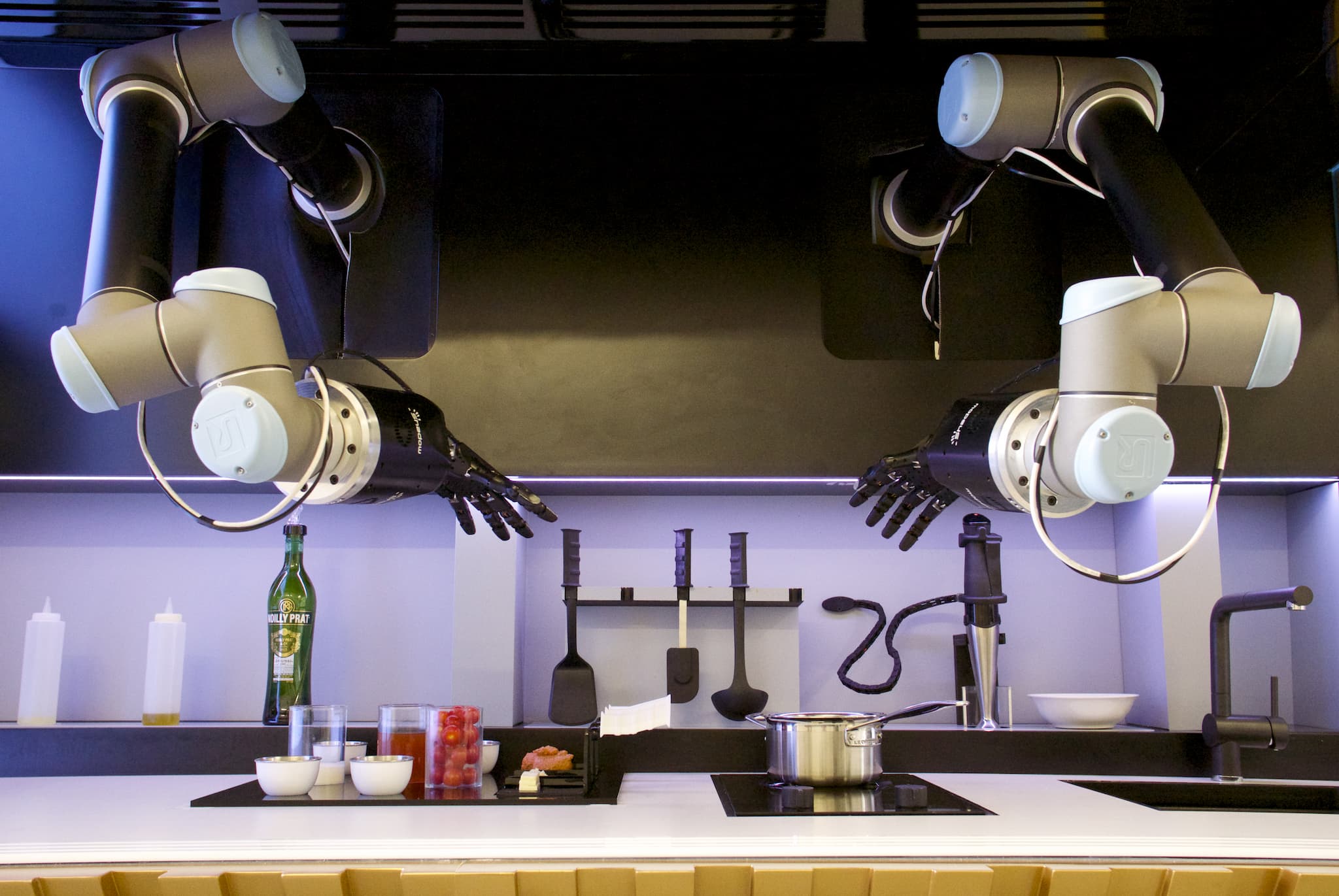 A new prototype unveiled at the Consumer Electronics fair in Shanghai gives households a peek into the future of food preparation: A robotic chef designed by Moley Robotics to take over cooking.

The robot is essentially designed to copy the actions of humans who have made the same meal. This is made possible because the individual in question will have prepared the meal while being filmed on 3D motion capture technology and wearing cyber gloves. The recorded data is then transferred into the Moley app. and, after collecting a database of recipes, users can then select menus based on their preferences.

Imagine being able to input data from the world’s top, award winning chefs—this means ordinary households equipped with the robo chef could have access to gourmet dishes prepared by some of the biggest names in the culinary industry, affordably.

According to the founder of Moley Robotics, the product is designed to be offered to a mass-market audience. While the robot is expected
to cost at $75,000, retail price is expected to drop dramatically in four to five years. According to Moley’s website, they plan to bring a consumer version to market by 2017. They assert that this version of the robochef will come with a library that has in its database of thousands of recipes. It will also come with an oven, a sink, a refrigerator, and dishwasher (yes, it can clean up after itself). Long-term, they hope to make a version that comes with a built-in camera, so that individuals can teach the robochef how to make their own, unique dishes and then upload them to a digital recipe library to share with others.

The technology is not meant to replace people or chefs, but aids in eliminating the tedium behind cooking and combat the urge to opt for
takeaways, fast-food, or junk food—so the tech may ultimately be more beneficial for people’s health.

See the robot in action here or take a look at the video below.

Read This Next
Futurism
There's a Startup That's Building the AI From 'Her'
Futurism
Watch As the First Human is Tattooed By An Industrial Robot
Futurism
Robots Could Be Performing a Third of U.S. Surgeries by 2021
Futurism
New Artificial Intelligence System Lets Robots Learn 100x Faster
Futurism
Self-Driving Robot Can Now Deliver Groceries to Your Home
More on Artificial Intelligence
Wow!
Yesterday on the byte
BuzzFeed Announces Plans to Use OpenAI to Churn Out Content
I Have a Dream of...
Yesterday on futurism
ChatGPT Shamelessly Writes Letter Announcing Layoffs While Promoting Execs and Quoting MLK
Good Morning!
Wednesday on the byte
Startup's Plans for Robot Lawyer Nixed After CEO Threatened With Jail
READ MORE STORIES ABOUT / Artificial Intelligence
Keep up.
Subscribe to our daily newsletter to keep in touch with the subjects shaping our future.
+Social+Newsletter
TopicsAbout UsContact Us
Copyright ©, Camden Media Inc All Rights Reserved. See our User Agreement, Privacy Policy and Data Use Policy. The material on this site may not be reproduced, distributed, transmitted, cached or otherwise used, except with prior written permission of Futurism. Articles may contain affiliate links which enable us to share in the revenue of any purchases made.
Fonts by Typekit and Monotype.