"Authorities say rise of fruit aliens is to blame for glut of outer space watermelons." 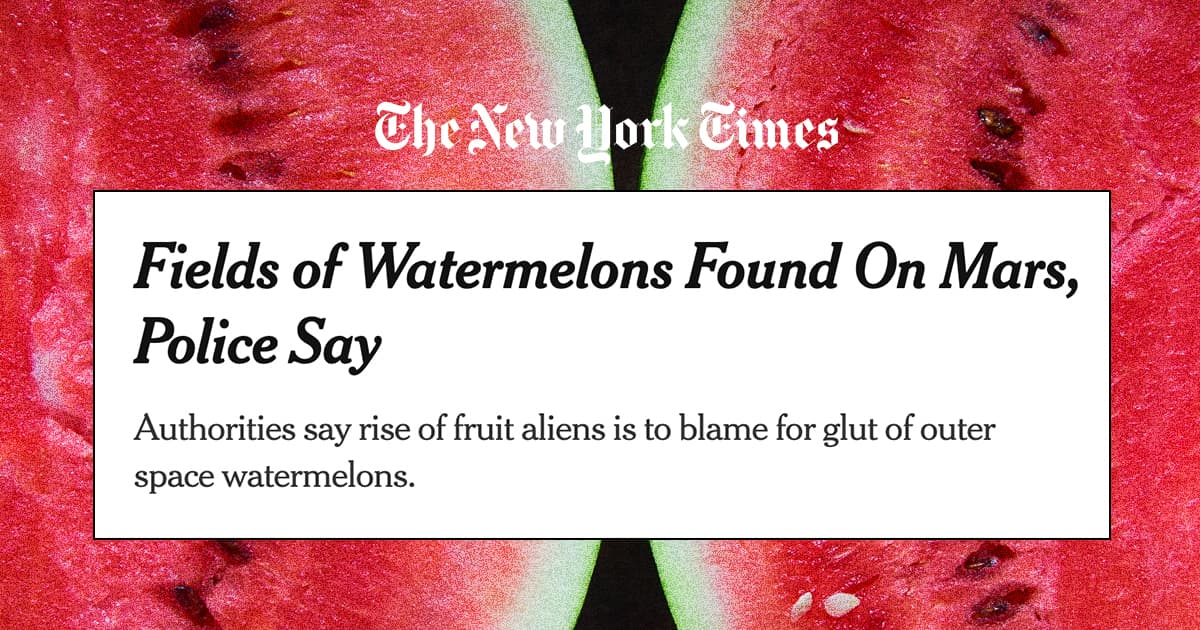 The New York Times is having a strange day.

This afternoon, the prominent newspaper published an article making a surprising claim about exobiology: that watermelons had been discovered on Mars.

"Authorities say rise of fruit aliens is to blame for glut of outer space watermelons," read the story, which was deleted less than an hour later. "The FBI declined to comment on reports of watermelons raining down, but confirmed that kiwis have been intercepted."

An archived snapshot of the story shows that it was just a stub, with numerous non-sequiturs.

"This story is terribly boring," it read in part.

The byline on the story was also unfamiliar, attributing the report to "Joe Schmoe."

The article disappeared after about an hour, replaced by a message saying it had been "published in error."

After this story initially ran, a New York Times spokesperson provided some clarity about the strange article.

"Earlier today, a mock article intended for a testing system was published on our site in error," she told Futurism. "The article has since been removed."

In other words, it sounds as though the article appeared as some sort of content management system test that was accidentally made public.

Needless to say, there is no currently-available evidence of watermelons, or any other life, on the Red Planet.

However, several NASA missions and a rover sent by China are all investigating the possibility of ancient life on our planetary neighbor, and scientists say it is possible that microbial life still lives there, likely deep under the surface.

If there's any evidence of fresh produce on the Red Planet, though, it's not yet public.

More on Mars: Why NASA Scientists Are So Excited by New Hints of Organic Compounds on Mars

Read This Next
A Sip of Opal
NASA Discovers Precious Gemstones on Mars
Martian Oases
Scientist Proposes Growing a Forest Inside a Bubble on Mars
Big Impact
Meteorite Hit Mars So Hard NASA Thought It Was a Quake
Palliative Care
NASA's Mars Lander Refuses to Die Even Though It's Supposed To
Signs Of Life
NASA Seems Awfully Excited About Finding Organic Matter on Mars
More on Off World
Heavy Metal
Yesterday on the byte
NASA Mars Rover Finds Metallic Object That Smashed Down on Surface
Small But Mighty
Yesterday on the byte
Baby Asteroid Photobombs James Webb On Accident
Little Guy
Yesterday on the byte
Scientists Prototype "Creeping" Lizard-Like Robot for Exploring Mars
READ MORE STORIES ABOUT / Off World
Keep up.
Subscribe to our daily newsletter to keep in touch with the subjects shaping our future.
+Social+Newsletter
TopicsAbout UsContact Us
Copyright ©, Camden Media Inc All Rights Reserved. See our User Agreement, Privacy Policy and Data Use Policy. The material on this site may not be reproduced, distributed, transmitted, cached or otherwise used, except with prior written permission of Futurism. Articles may contain affiliate links which enable us to share in the revenue of any purchases made.
Fonts by Typekit and Monotype.