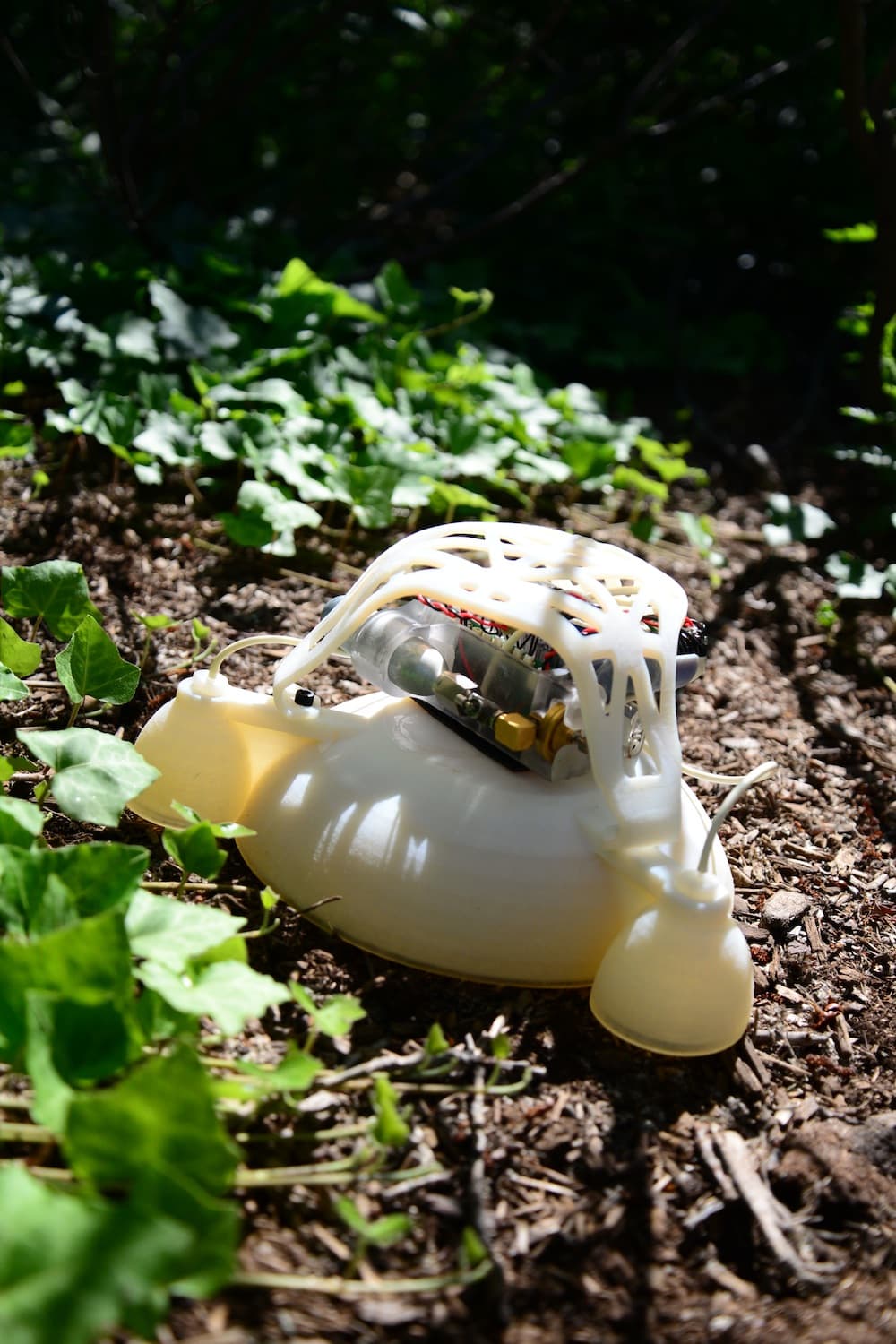 The kind of robots most people have been seeing recently look rather similar. Humanoids, rovers, and most other kinds of robots all typically follow the convention of hard design with their hard shells. However, the machines can be limited by their own rigidity; they crash when they fall and cannot easily pass obstacles. Roboticists have recently been designing soft robots and now, researchers have crafted a leaping robot with both soft and hard design.

The team designed a leaping, three-legged, 2.1 pound, 3-D printed robot inspired by an octopus’ soft body with gradual transition to hard beak. The bot has a soft belly that can flex and an upper hemisphere with nine layers—the hardest layer being 1000 times harder than its softest one. Another design the researchers pioneered was the machine’s motion. It uses combustion to flex its belly forcefully, essentially catapulting itself. These jumps are powerful; it can reach a height six times taller than itself is.

This innovative hybridization will help lead to “a new generation of fast, agile robots that are more robust and adaptable than their predecessors and can safely work side by side with humans," expresses Michael Tolley, co-lead author of the research and UCSD roboticist. This work could be in disaster sites and areas otherwise difficult to maneuver in, as the hybrid’s mobility is much better than its wheeled or clumsy bipedal contemporaries. The other lead author, Harvard roboticist Nicholas Bartlett highlights another possibility, saying, ”One wild potential application would be in space — on the moon or Mars or other planets.” Wherever this leaping machine ends up, it’s poised to rapidly change the field of robotics.

Read This Next
Brands We Love
Robots Are Already Driving and Painting, Now They're Directing Films Too
Futurism
There's Now A Computer Designed Specifically for Programming Intelligent Robots
Futurism
The Military Wants to Make AI That Mimics the Human Brain. Experts Know There’s a Better Way.
Futurism
Bring This Robot to a Disco, and It'll Dance With You
Futurism
Saudi Arabia Made a Robot a Citizen. Now, She's Calling For Women's Rights.
More on Artificial Intelligence
Pleading the Fifth
8:01 PM on futurism
Extremely Embarrassing Evidence Emerges Against CEO of “Robot Lawyer” Startup
AIlex Jones
7:23 PM on the byte
ChatGPT Is Freakishly Good at Spitting Out Misinformation on Purpose
Meow Meow
6:36 PM on the byte
Amazing New CatGPT AI Answers as If It Were a Kitty Cat
READ MORE STORIES ABOUT / Artificial Intelligence
Keep up.
Subscribe to our daily newsletter to keep in touch with the subjects shaping our future.
+Social+Newsletter
TopicsAbout UsContact Us
Copyright ©, Camden Media Inc All Rights Reserved. See our User Agreement, Privacy Policy and Data Use Policy. The material on this site may not be reproduced, distributed, transmitted, cached or otherwise used, except with prior written permission of Futurism. Articles may contain affiliate links which enable us to share in the revenue of any purchases made.
Fonts by Typekit and Monotype.