Watch a Quadriplegic Man Feed Himself With Two Bionic Arms

They're wired directly into his brain. 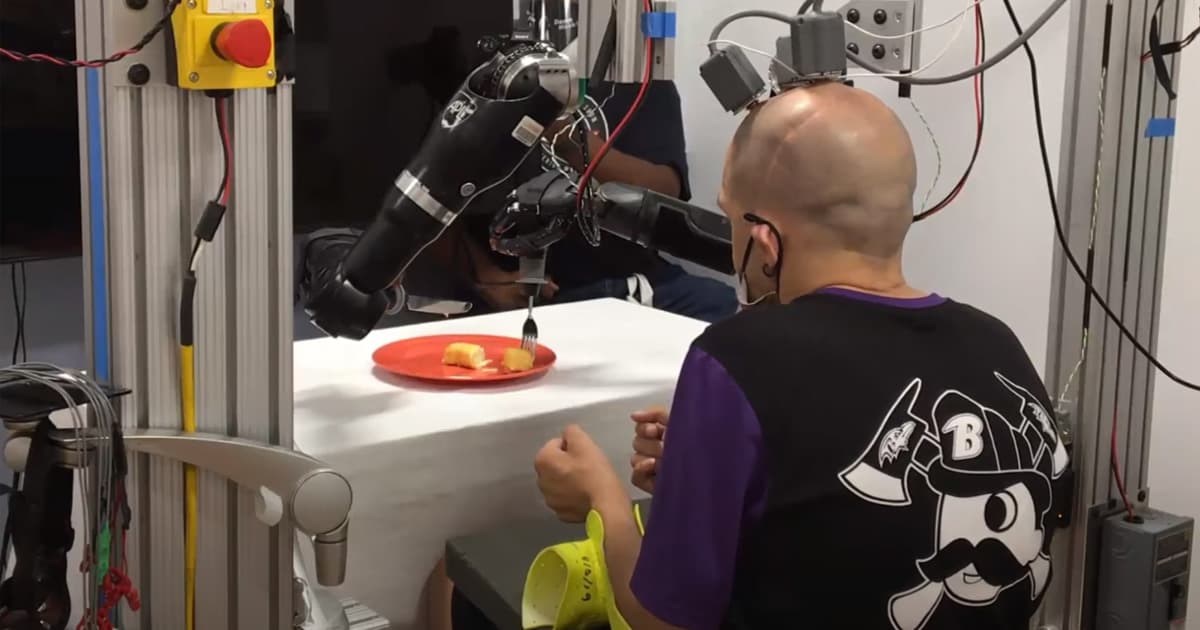 After living with quadriplegia for 30 years — meaning that all four of his limbs are paralyzed — Robert "Buz" Chmielewski was able to feed himself with a fork and knife thanks to a pair of sophisticated robotic prosthetic limbs and a series of electrodes implanted onto his brain.

Chmielewski has been working toward this achievement for the two years since he underwent brain surgery and had six electrode arrays implanted into his brain by Johns Hopkins University surgeons, according to a press release. The thought-controlled arms grant new levels of dexterity and, by sending signals back to the brain, provide a sense of touch so that Chmielewski doesn't have to stare at what he's doing.

"It's pretty cool," Chmielewski said in the release. "I wanted to be able to do more of it."

In a demo video, Chmielewski directed two robotic arms with human-like, five-fingered hands to skewer desserts with a fork, cut them with a knife, and then bring the morsel up to his mouth so he could eat it, with a robotic voice listing off input instructions each step of the way.

"Our ultimate goal is to make activities such as eating easy to accomplish, having the robot do one part of the work and leaving the user, in this case Buz, in charge of the details: which food to eat, where to cut, how big the cut piece should be," David Handelman, a senior roboticist at the Johns Hopkins Applied Physics Laboratory who helped develop the system, said in the release.

"By combining brain-computer interface signals with robotics and artificial intelligence," Handelman added, "we allow the human to focus on the parts of the task that matter most."

Down the road, the team hopes to further develop the robotic arms by increasing the number of activities they can help with while also enhancing the sensory feedback they send to Chmielewski's brain — making using the arms feel as natural as possible.

"A lot of people take that for granted," Chmielewski said in the release. "To be able to do this independently and still be able to interact with family is a game-changer."