Watch a Violinist Play While Surgeons Operate on Her Brain 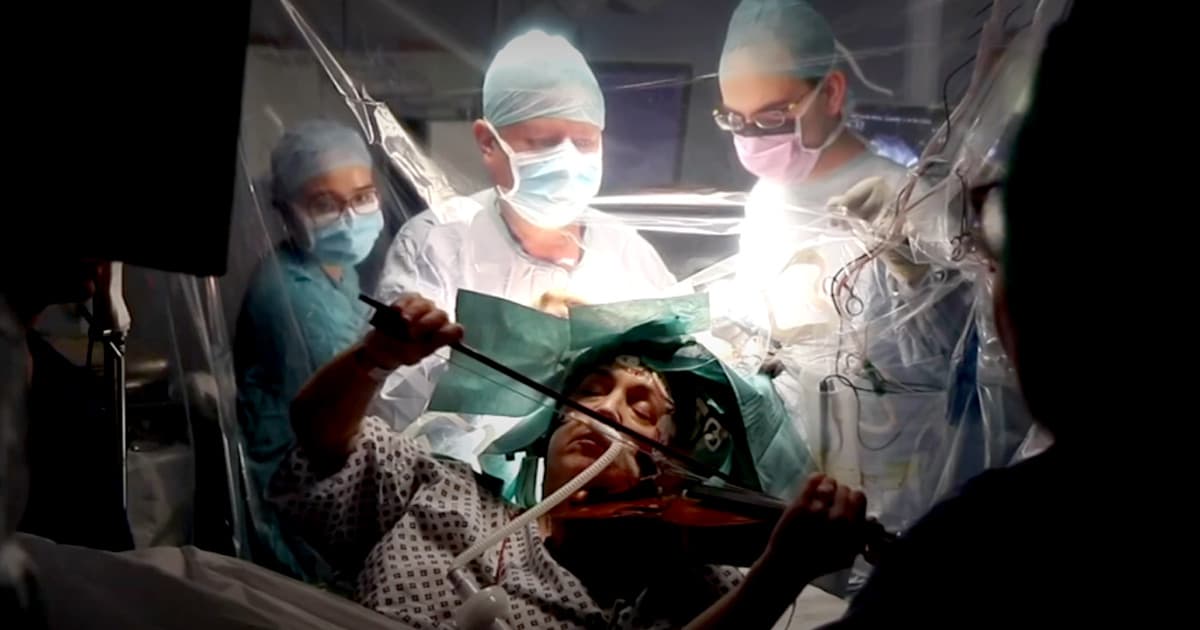 The brain is a delicate instrument. Any neurosurgery risks permanently altering a patient's cognitive capabilities.

Protecting a patient's talents during surgery can be a complex task for surgeons — as evidenced by a white-knuckles video shared recently by The Guardian.

In the clip, 53-year-old Dagmar Turner plays sections of compositions by Mahler and Gershwin as surgeons work to remove a tumor from her brain.

Reuters reports that the tumor had been situated close to the area of Turner's brain responsible for controlling her left hand. Fearing the loss of 40 years of craft, neurosurgeon Keyoumars Ashkan at King’s College Hospital developed a three-step plan — map Turner's brain, open her skull, and get her to play.

This process, known as intraoperative brain mapping or simply "awake brain surgery," is used by surgeons when there's concern about damaging areas of the brain responsible for controlling certain skills. It's possible in part because there are no pain receptors in the brain.

Despite being literally the plot of an episode of popular TV medical melodrama, Grey's Anatomy, the process isn't uncommon. The Mayo Clinic estimates their facility performs over 1,000 such surgeries per year and a cursory YouTube search shows examples of other musicians undergoing similar procedures while playing the violin, guitar, or even a saxophone.

Still, for many medical professionals working in the operating room, this might be an unfamiliar sight.

“This was the first time I’ve had a patient play an instrument,” Ashkan told Reuters. In the end, Ashkan's team managed to remove 90% of Turner's tumor without any damage to her motor functions.

"The violin is my passion; I’ve been playing since I was 10 years old,” a grateful Turner told Reuters. "The thought of losing my ability to play was heart-breaking.”