Then he accidentally spelled it "caronavirus." 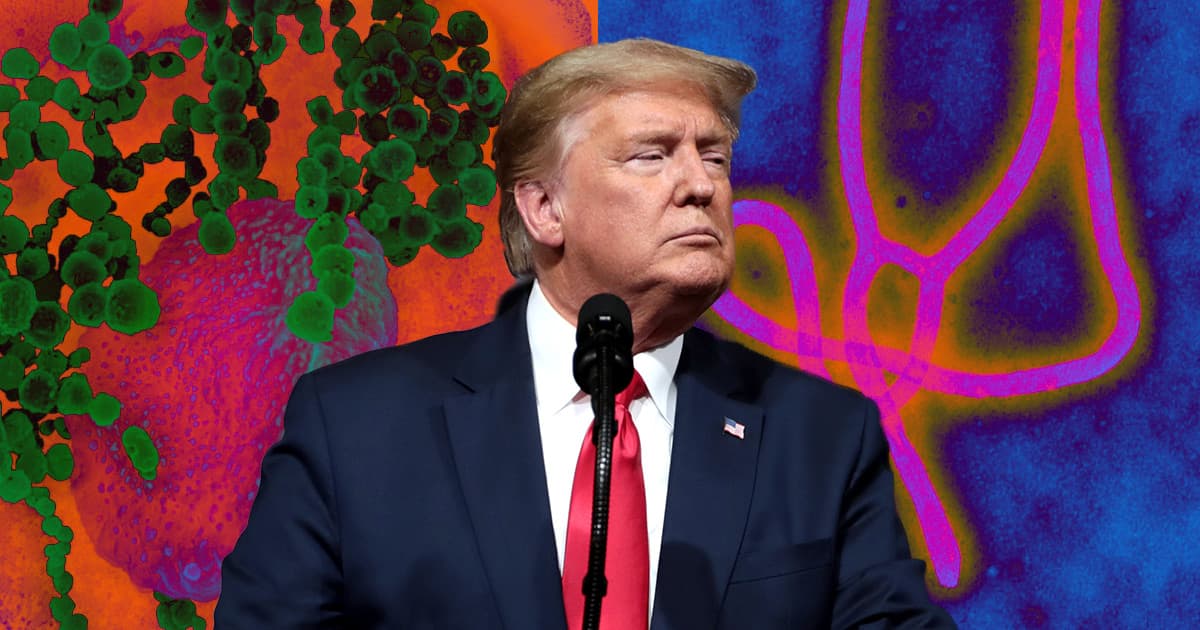 During an appearance in India this week, noted reality TV star and U.S. President Donald Trump appeared to confuse the COVID-19-causing coronavirus SARS-CoV-2 with Ebola, a completely separate deadly disease.

The gaffe was notable, of course, because Trump is arguably the leader of the free world — but also because in years past, he was sharply critical of the previous administration's efforts to fight the Ebola outbreak.

To be fair, Trump's remark veered wildly between Ebola and the COVID-19-causing virus SARS-CoV-2 in a way that was difficult to follow.

First he said — more or less accurately — that the mortality rate of the coronavirus is between one and two percent. But then things started to get foggy.

"In the other case it was a virtual 100 percent," he said, seemingly now talking about Ebola.

This, it's worth pointing out, is flabbergastingly wrong: Ebola is a terrible disease, but it only kills about half of people it infects, according to the World Health Organization.

Then things went even further off the rails, as it again became unclear which virus Trump was referring to.

"Now they have it, they have studied it, they know very much," Trump said. "In fact, we’re very close to a vaccine."

When CNBC asked, a White House spokesperson said that Trump had been talking about Ebola when he said that vaccine was "very close," rather than SARS-CoV-2.

If so, CNBC pointed out, Trump seemingly had his facts mixed up again — because the FDA approved a vaccine for Ebola back in December.

It seems more likely that Trump was mangling reports that an experimental vaccine had shipped earlier this week for SARS-CoV-2, though that one still needs to undergo clinical trials, meaning it's not "very close" by any normal definition of the term.

The blunder wasn't unexpected for Trump, who's long been noted for his epic rhetorical screwups, but was fairly ironic given his repeated critiques of former U.S. President Barack Obama's response to Ebola.

"Ebola patient will be brought to the U.S. in a few days," he tweeted in 2014, adding that "now I know for sure that our leaders are incompetent."

And then, on Wednesday, Trump added the perfect kicker — by tweeting the typo "caronavirus" to his 73 million followers.

Low Ratings Fake News MSDNC (Comcast) & @CNN are doing everything possible to make the Caronavirus look as bad as possible, including panicking markets, if possible. Likewise their incompetent Do Nothing Democrat comrades are all talk, no action. USA in great shape! @CDCgov.....

More on COVID-19: Here’s a Timeline of how China’s Viral Outbreak Spread Worldwide