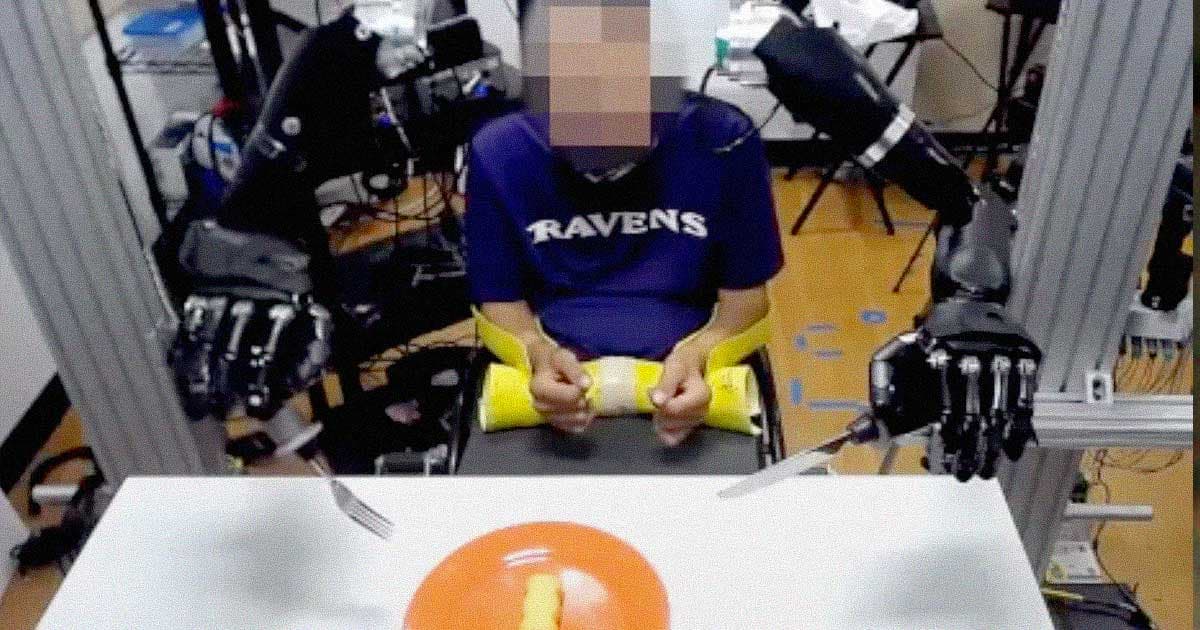 A high tech pair of robotic arms allowed a partially paralyzed man to eat with a knife and fork, an impressive demonstration that could allow others with disabilities to regain a significant degree of autonomy.

The arms, developed by a team of researchers at the Johns Hopkins Applied Physics Laboratory (APL), work by reading its wearer's brain signals using a brain-machine interface (BMI). This interface then translates these signals into the movement of both robotic arms — and with astonishing dexterity, given the micromotor sophistication and strength required to manipulate cutlery.

In experiments involving a patient who hadn't been able to use his fingers for around 30 years, an impressive video shows the appendages cutting a piece of cake with a knife and fork, then popping it into the man's mouth.

It's the culmination of 15 years of robotics and neural science research at the APL, whose efforts were sponsored until 2020 by the US Defense Advanced Research Project Agency (DARPA).

"This shared control approach is intended to leverage the intrinsic capabilities of the brain machine interface and the robotic system, creating a ‘best of both worlds’ environment where the user can personalize the behavior of a smart prosthesis," said Francesco Tenore, co-author of a new study published in the journal Frontiers in Neurobotics, in a statement.

"Although our results are preliminary, we are excited about giving users with limited capability a true sense of control over increasingly intelligent assistive machines," he added.

It's a big step in the right direction, achieving impressive degrees of dexterity — which is crucial to actually be of help in everyday life. At the same time, as the video shows, the process is still agonizingly slow — and would almost certainly struggle with tougher foodstuffs than a tasty pastry.

"In order for robots to perform human-like tasks for people with reduced functionality, they will require human-like dexterity," explained David Handelman, first author and senior roboticist at APL, in the statement. "Human-like dexterity requires complex control of a complex robot skeleton."