Look at that little guy go! 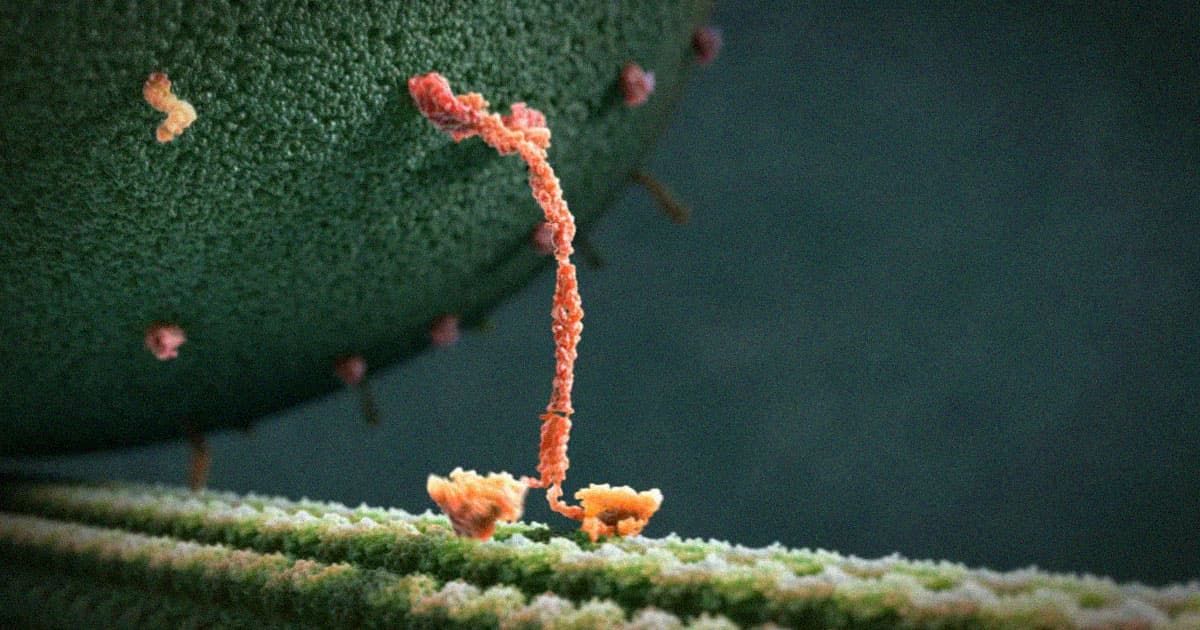 Every once in a while, a specific clip goes viral showing a fleshy pink strand that appears to be dragging a larger, spherical object that looks a bit like a foam dodgeball.

Though the fascinating footage seldom fails to draw attention, it's often miscontextualized in a way that gets slapped down by actual experts. So let's dive in — what's really going on here?

As it's usually labeled, the scene depicts a microscopic slice of life. But the most fascinating part of the video is that the strand appears to be walking. Trudging its fluffy, Big Bird-esque feet one after the other, the molecule performs what can only be described as a confident little strut, Gisele-stomping its way down some kind of — dare we say? — biological runway.

To be fair, the clip — which took off on Twitter once again this week, complete with the bafflingly almost-coherent caption "This is how Protein Moving in Microscope" — is very intriguing. Fun colors! Big feet! Truffula Tree vibes! And seriously, look at him go. That's a WALK.

But like so many things we see online, there are a lot of missing details — not to mention outright inaccuracy — at play here.

This is how Protein Moving in Microscope pic.twitter.com/SHlilvyJtN

The actual animation dates back to 2006, when it was published by a pair of Harvard University researchers working with an artist and animator named John Liebler. Together, the trio took several years to produce a dramatized 3D modeling of internal cellular function titled "The Inner Life of the Cell."

So right off the bat, it turns out that this is emphatically not "how protein moving in microscope." Though it depicts a genuine biological process, the footage is computer generated.

It is true that the strand represents a protein, though that limited context is too vague to tell the whole story.

In reality, there are many different proteins, three of which — kinesins, myosins, and dyneins— are considered "motor" proteins.

As their name suggests, these high-energy bad boys, powered by ATP — that is, the main energy molecule that essentially powers all known life — are responsible for making sure that materials needed for building cellular infrastructure get to where they need to go, and are also the source of most muscle contraction.

In other words, motor proteins are in charge of moving stuff. And to do so, they themselves need ways to get from place to place.

The loofah-footed protein in the viral clip was animated to show how kinesins are thought to move. And yes, they really are believed to "walk" along molecular rails called microtubles.

Different motor proteins are understood to move differently — myosins carry out a type of scooting motion, while dyneins have been shown to swing from tiny cellular monkey bars with grappling hook-like arms.

As for what the kinesin in the video might be dragging?

The ambulatory little guys are believed to carry a number of necessary materials, including but not limited to vesicles — AKA, tiny lil' sacks that the body creates to transport things like enzymes, hormones, neurotransmitters and proteins — and organelles, which are in essence tiny organs that perform a number of necessary functions inside individual cells.

But the way that the kinesin is moving its freight is actually an area where this video is now outdated. Scientists no longer think that kinesins pull or drag their cargo, as is seen in the viral clip.

Rather, these jacked little messengers are believed to carry their assigned freight overhead while they strut down molecular pathways. Arm day everyday.

Fascinatingly, scientists have still barely scratched the surface of what's possible with more motor protein research. Perhaps most excitingly, it's believed that because these molecules play an important role in cell division, figuring out how to selectively annihilate or otherwise manipulate cancerous motor proteins may one day be used as the mechanism behind promising future treatments.

There's no denying that the clip is an awe-inspiring reminder of the vast and complex world inside every living thing, including ourselves.

But please — don't believe everything you read online.