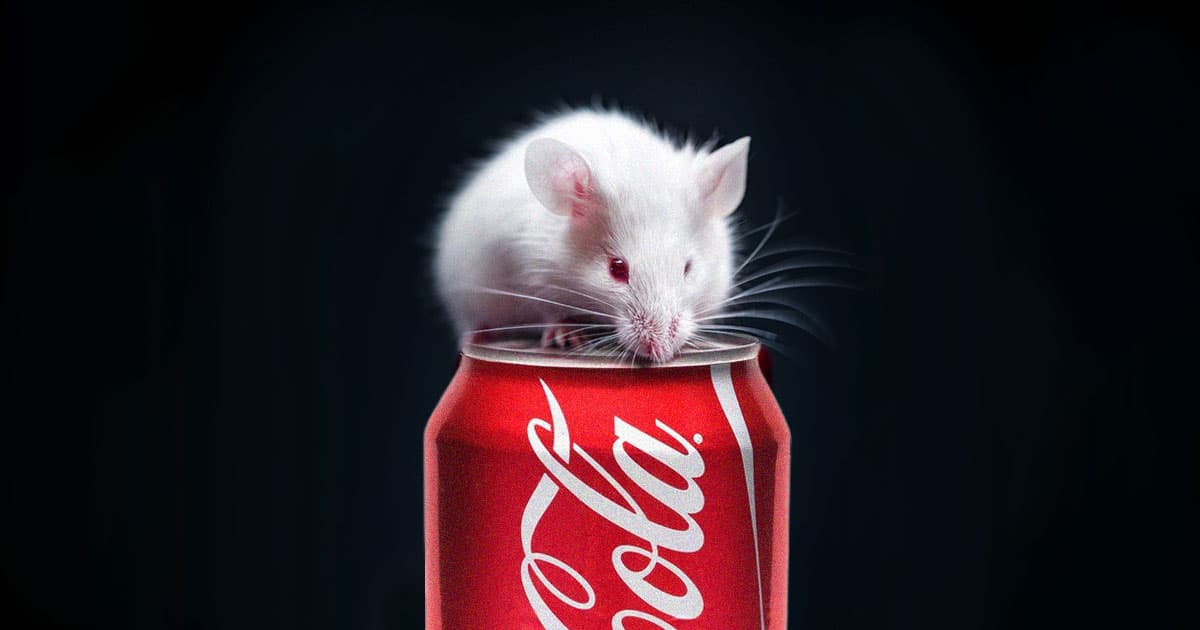 In a new study, a team of researchers found that feeding rats soft drinks like Coke and Pepsi caused enough damage to the unfortunate critters' brains to trigger memory issues, cognitive impairment, and cellular distress.

Of course, soda isn't exactly considered health food. It's absolutely packed with sweeteners, real and fake, and studies far and wide have confirmed that sugars like those found in soft drinks lead to health conditions including diabetes, heart disease, tooth decay, and liver complications, to name a few.

But according to the new research, consistent, long-term consumption of sugary, cola-based soft drinks specifically may also be directly linked to brain health and behavioral issues — and, apparently, the inability to make one's way through a maze. (If you're a rat, that is.)

In order to study how cola-based sodas — which were chosen for study due to their prevalence in many modern human diets — might impact the rats' brains, the scientists first separated the rats into three age groups: 2-month, 8-month, and 14-month olds. Each of those age groups were then split into water-drinking and cola-and-water-drinking cohorts.

After 57 days, the scientists ran the rodents through some maze-based behavior testing, and ten days after that, the rats were euthanized so that the scientists could then examine any differences in their brains.

Upon examination, the water-drinking rodents were perfectly fine. The soda sippers? Not so much.

During the behavioral tests, the scientists found that most of the soda-drinkers, specifically the 2- and 8- month olds, had worse memories and, generally, lower cognitive function than their purist counterparts — thus causing some serious difficulty when they tried to get around those damn mazes.

Poor guys. But considering what the scientists discovered when they opened up the creatures' craniums, that's not terribly surprising.

A closer look at the rattos' brains confirmed that the soda groups had all sustained varying degrees of damage to the frontal cortex, which controls vital mental functions like attention, memory, and judgement, as well as the hippocampus, which plays a major role in both memory and learning.

Neurological damage is never a positive thing. But frankly, not being able to make their way through mazes would perhaps have been the least of the rats' problems, if they'd been left alive. In humans, frontal cortex damage has also been linked to personality changes and over-impulsivity, while injury to the hippocampus is thought to play a significant role in illnesses like anxiety, depression, bipolar disorder, schizophrenia, and more.

It's important to remember that this study is grounded in long-term exposure. If a rat were to barely drink cola — maybe just order a glass at dinner from time to time — it would probably be fine, a likelihood supported by the fact that the oldest rats, whose brains were most fully-formed, were least affected by soda rations. But a rat that drinks Coke or Pepsi every day... well, that's a different story.

It's also key to point out that rats aren't people, so we can't recommend that the CDC updates its recommendations just yet. Still, considering all that humans have learned about sugary sodas in recent years, we wouldn't be surprised if, sometime soon, cola cans come with some extra warnings on the label.

More on soda being horrible for you: Experts Propose Slapping Photos of Diseased Organs on Sugary Drinks