Lentil Me Not
Friday / by Noor Al-Sibai 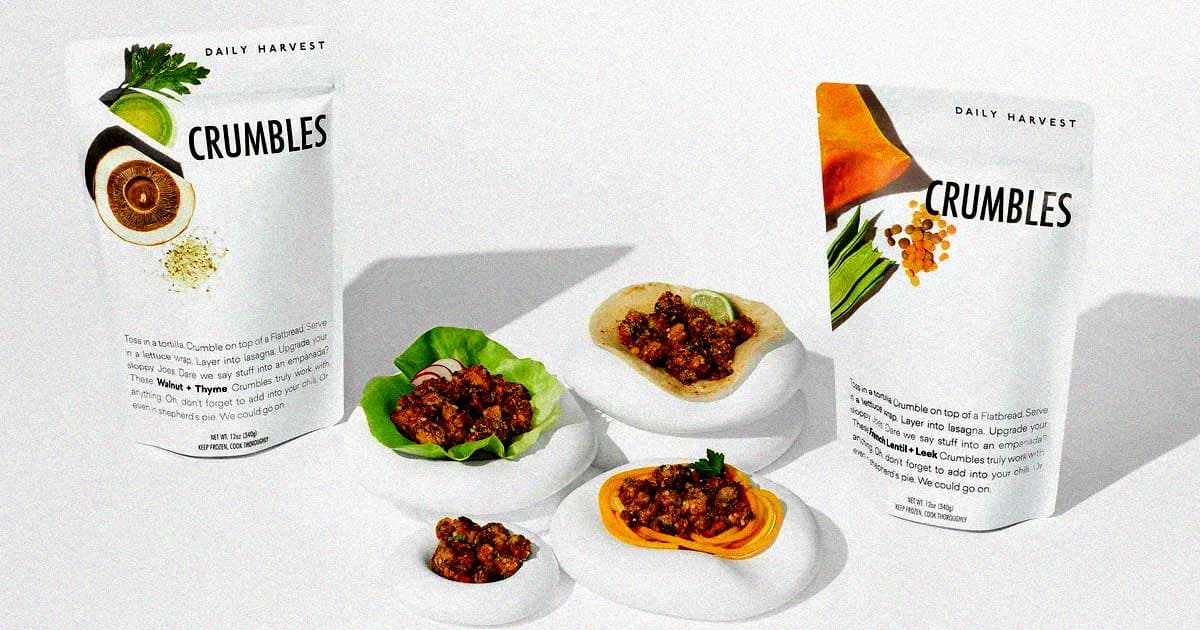 A vegan subscription service has a lot of explaining to do after a number of people reported intense stomach issues and even organ failure after consuming the plant-based foodstuffs.

Over the weekend, the Daily Harvest vegan smoothie and victuals company issued a statement recalling its French Lentil + Leek Crumbles because they were, as the announcement put it, "causing gastrointestinal issues" in some customers.

But it turns out "gastrointestinal issues" is something of an understatement — for weeks, Daily Harvest customers had been taking to social media to discuss bizarre conditions they got after eating the crumbles.

One such sufferer, Luke Tashie, told NBC News that he went to the hospital after having "extreme liver pain" following the consumption of the Daily Harvest crumbles.

"The surgeons that consulted with me were so perplexed," Tashie told NBC, "that they seriously considered removing my gallbladder."

Although the Daily Harvest statement itself was pretty boilerplate, the company's social media response left much to be desired.

In spite of publicly issuing the recall on Sunday, NBC noted that accounts that claimed to be associated with Daily Harvest had begun responding to customer complaints as early as last Wednesday, in response to testimonies on a subreddit associated with the company.

To add insult to injury, the company didn't make a dedicated Instagram post about the recall until this week, which included language similar to the announcement on its website.

Before Daily Harvest finally made the recall post, writer Sophie Ross noted on Twitter that the language the company used made it sound much less severe than the accounts from deeply unsatisfied and ill customers claimed to have experienced, which in some cases allegedly led to their gallbladders having to be removed.

Daily Harvest, to its credit, is now working with the Food and Drug Administration to figure out exactly what went wrong with the crumbles.

Lentils, as Harvard's TH Chan School of Public Health has noted, contain a protein called lectin, which if eaten in large quantities can cause side effects ranging from gas to nausea and vomiting. This is only an issue if lectin-rich foods are eaten raw and in large quantities, the school added.

Until the FDA weighs in and either it or Daily Harvest announces the results of its investigation, we can't really know why those lentil crumbles reportedly gave so many people such serious side effects.

But just to be safe, it's a good idea to throw out any Daily Harvest stuff sitting around in your freezer.

6.22.22 Developments
The FDA Is Reportedly About to Shut Down JUUL
Game over.
By Victor Tangermann / Read More >>
6.21.22 Genetics
Patients Treated With CRISPR Still "Cured" Three Years Later
This is really promising.
By Victor Tangermann / Read More >>
6.18.22 Studies
Scientists Say They're Honing in on a Pill You Can Take Instead of Exercising
The medicine could prevent osteoporosis and heart disease.
By Lonnie Lee Hood / Read More >>
Keep up.
Subscribe to our daily newsletter to keep in touch with the subjects shaping our future.
+Social+Newsletter
TopicsAbout UsContact Us
Copyright ©, Camden Media Inc All Rights Reserved. See our User Agreement, Privacy Policy and Data Use Policy. The material on this site may not be reproduced, distributed, transmitted, cached or otherwise used, except with prior written permission of Futurism. Fonts by Typekit and Monotype.