Do You Believe Me Now?
Oct 12 / by Victor Tangermann

He's been known to pull out a chart on his laptop. 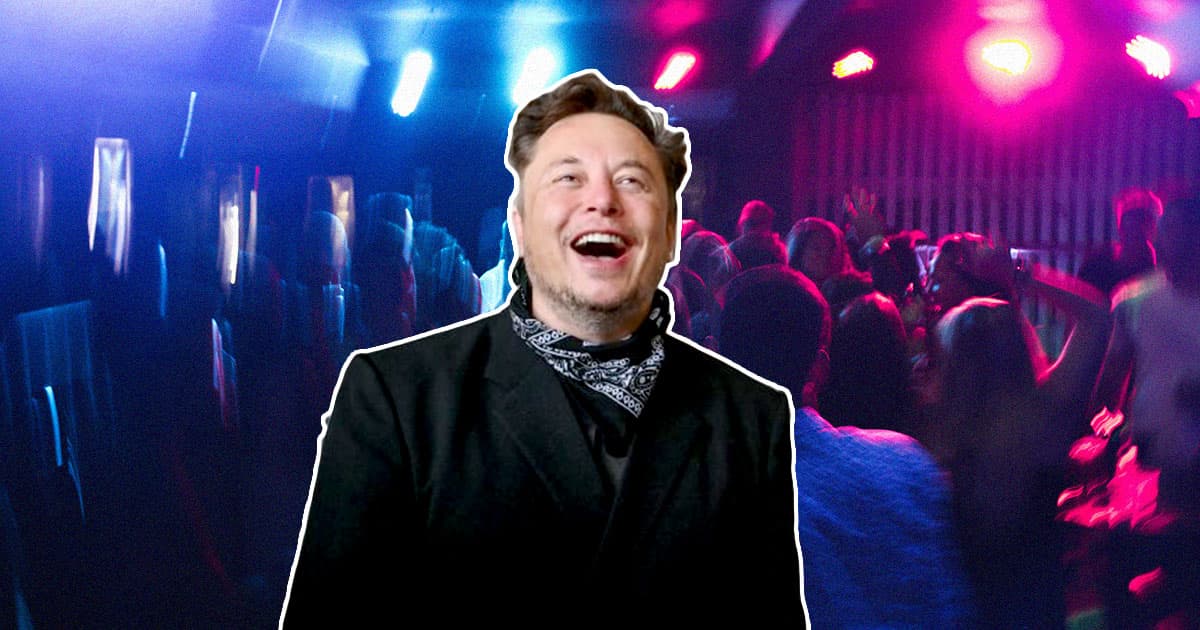 It's no secret that Tesla CEO Elon Musk likes to let loose sometimes, in a respite between extremely long work days and an infamously packed schedule.

From lavish weekend-long parties to attending Burning Man, Musk has long been known to attend social gatherings of all kinds, as detailed in a recent New York Times feature.

And, perhaps unsurprisingly, recreational drug use is a topic that seems to come up a lot in his company.

According to the NYT, Musk likes to pass around a chart purporting to explain why 3,4-Methyl​enedioxy​methamphetamine (MDMA) and psilocybin mushrooms are healthier choices than alcohol.

As for taking these drugs himself, the richest man in the world seems to prefer playing it safe — whatever that means in this context.

"I have been with him on mild exploratory journeys," David Marglin, a longtime friend of Musk's met him at Burning Man, told the NYT. "And he appreciates the value of those journeys."

"Nothing out of control or wild," he added, "but it’s all night, and there’s dancing and revelry."

Then there was the time when musician Azealia Banks accused Musk of being on Twitter "while on acid" back in 2018, which Musk disputed.

However, Musk has long maintained that we should seriously consider the health benefits of these kinds of drugs.

"I think, generally, people should be open to psychedelics," Musk said during a 2021 interview. "A lot of people making laws are kind of from a different era, so I think, as the new generation gets into political power, I think we will see greater receptivity to the benefits of psychedelics."

Musk maintains that psychedelics may actually be better than commonly used drugs, such as selective serotonin reuptake inhibitors (SSRIs), which are often prescribed to treat depression.

In April, Musk tweeted that "I’ve talked to many more people who were helped by psychedelics and ketamine than SSRIs and amphetamines."

But that doesn't mean we should take him by his word — after all, he's a business magnate, not a neuroscientist.

And it's worth noting that while psilocybin is generally seen as fairly safe by doctors, the same isn't necessarily true of MDMA, known for causing intense euphoria and sometimes brutal hangovers. It might not be a disaster to take it every once in a while, but it's widely established that abusing it frequently can lead to a wide range of neurological issues.

There certainly has been plenty of recent interest — and a significant number of small studies — by the scientific community to study the potential therapeutic use cases of psychedelic and other recreational drugs.

For instance, some studies have found that the psilocybin can improve the symptoms of depression. Scientists have also found that LSD-based drugs could also help with anxiety and depression.

The evidence, however, is still preliminary and many of these studies are still too small to draw any definitive conclusions. Methodologically, it's also impossible to establish a meaningful control group, because if someone starts tripping, it becomes pretty clear to them that they didn't take the placebo.

But Musk, for one, is a firm believer in their potential — and he's willing to go out of his way to prove it to you.

12.02.22 Studies
So Many People Die at Motorcycle Rallies That Organ Donations Spike
There's a macabre benefit to those in need of organ transplants.
By Noor Al-Sibai / Read More >>
12.02.22 Studies
Scientists Hopeful About Promising Results From HIV Vaccine
"We’re far from using this as a vaccine, but this is very exciting science."
By Victor Tangermann / Read More >>
11.30.22 Developments
Student Journalists Expose Claims of Scientific Misconduct Against Stanford's President
There are "serious problems" with this dude's work, one expert said.
By Noor Al-Sibai / Read More >>
Keep up.
Subscribe to our daily newsletter to keep in touch with the subjects shaping our future.
+Social+Newsletter
TopicsAbout UsContact Us
Copyright ©, Camden Media Inc All Rights Reserved. See our User Agreement, Privacy Policy and Data Use Policy. The material on this site may not be reproduced, distributed, transmitted, cached or otherwise used, except with prior written permission of Futurism. Articles may contain affiliate links which enable us to share in the revenue of any purchases made.
Fonts by Typekit and Monotype.