Literally what the hell is happening. 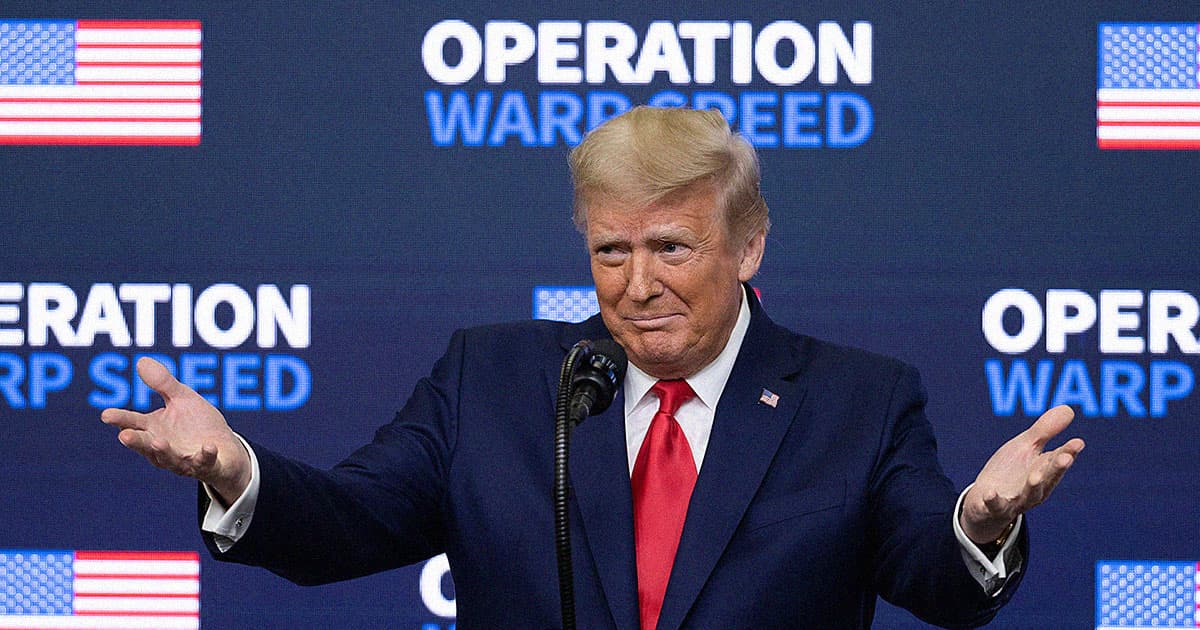 We never thought we'd see the day when erstwhile President Donald Trump took far-right personality Candace Owens to task for questioning the safety of COVID-19 vaccines — but then again, 2021 has been full of surprises.

In a viral video that baffles the imagination, Owens attempts to bait Trump into disparaging the vaccines that were so swiftly manufactured at the end of his presidency, thanks in part to the multi-billion-dollar bet he took with Operation Warp Speed. And, to no one's shock, he didn't take kindly to her poo-pooing what he's now calling his "greatest achievement."

Donald Trump: 'The Vaccine is one of the greatest achievements of mankind' 'All three vaccines (Pfizer, Moderna, J&J) are very good' 'The vaccines work - If you take the vaccine you are protected' 'People aren't dying when they take the vaccine' pic.twitter.com/fU8q1sdMda

Owens tried to pin COVID deaths on current President Joe Biden, and even tried to link coronavirus fatalities to vaccinations because "more people took the vaccine this year" — skating right past the fact that the vaccines weren't widely available to the public until early 2021 — but Trump simply wasn't having it.

"The vaccine works," he insisted. "The ones that get very sick and go to the hospital are the ones that don't take the vaccine."

Lest anyone give Trump too much credit here, it should be noted that at multiple times during the short interview clip, when Owens asked Trump about mandates for both masks and vaccine, the former president repeatedly said he was against both, and that he was against kids having to wear masks as well.

Perhaps more bizarre even than Trump's newfound cheerleading of COVID vaccines — which, to be fair, seems to have little to do with science or public safety and everything to do with the fact that he thinks he deserves credit for the vaccines — was an aside in which he jumped to the defense of China.

When discussing children having to wear masks at school, Owens harkened back to the early pandemic when she said that kids in masks made the US look "like China," Trump interjected.

"Well, China's education system is a hell of a lot better than ours," the former president said. "You know what, they're rated number two or three and we're rated number 44."

Owens brushed it off.

Nevertheless, the effect was bizarre to anyone who recalls Trump's xenophobic stance towards China, especially when he kept insistently calling COVID the "China virus."

If nothing else, COVID has clearly turned the world so upside-down that Donald Trump is now praising both China and vaccines.

More pro-vax Trump: Trump Gets Booed by His Own Fans When He Admits He Got Booster Shot

And COVID craziness: People Got Sick at a Conspiracy Conference. They’re Sure It’s Anthrax. [Vice News]